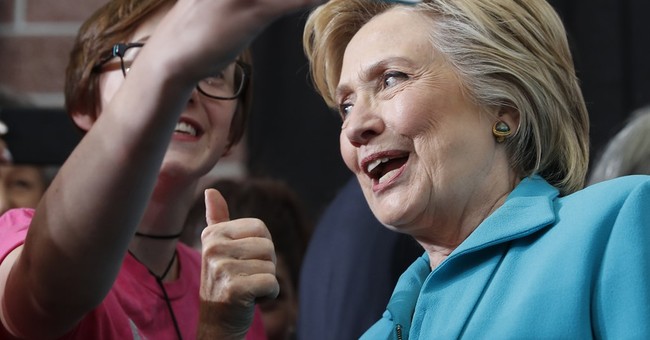 The latest developments with the Clinton Foundation and the former secretary of state’s emails seem to be continuing to erode her support with voters. A new national poll from the Morning Consult has Republican nominee Donald Trump trailing Clinton by a mere two points. It’s a statistical dead heat. When you factor the other candidates into the poll, the Consult found that Clinton’s lead remains at two points (via The Hill):

Just three weeks ago, Clinton led Trump by 7 points in the same poll, 44 percent to 37 percent.

When third-party candidates are factored into the new poll, Clinton maintains a 2-point lead over Trump, with 38 percent support for the former secretary of State, 36 percent for the real estate mogul, 9 percent for Libertarian Party nominee Gary Johnson and 4 percent for Green Party nominee Jill Stein.

Both candidates are weak, but the spotlight has been on Clinton’s shortfalls, given the renewed allegations of pay-to-pay dealings with her nonprofit and the FBI’s notes on their investigation into her unauthorized, unsecure email server, where she conducted official business. We learned that she didn’t know documents marked “c” stood for classified, she used 13 devices, and some of her Blackberrys were destroyed with hammers, despite a security sweep function existing on these phones.

Clinton told the FBI that she could not remember, or recall, certain details a total of 39 times during their investigation. On CNN’s Inside Politics with John King, the panel pretty much agreed that Clinton’s email arrangement was not appropriate, with certain elements failing the common sense test with voters. Sara Murray mentioned Clinton emailing classified details about future drone strikes on terrorists over her unsecure server as an explicit example. The Washington Post’s Abby Phillip added that while there was illegality found with these notes, there was a great deal that was “unacceptable.” That appears to be what the Clinton campaign doesn’t get about this fiasco, which is that it doesn’t matter if it was illegal—it was wrong. Voters seem to understand that.

CBS News’ Elections Director Anthony Salvanto noted that Clinton is still in the lead, but she has historic unfavorable numbers, along with issues about honesty and trust. Twenty-four percent of battleground state voters are “settling” on either Clinton or Trump, meaning that these aren't firm commitments, which is why Salvanto thinks the race is still up in the air in some areas. A CBS poll on the email issue also pointed out that 46 percent of Americans feel that Clinton’s explanations for her email server haven’t changed, which isn’t a good finding, while 46 percent feel they’ve become less believable. Seven percent think they’re getting more believable (who are these people?).

In June, Salvanto found that the candidate that voters in battleground states feel can bring change is Donald Trump. He also mentioned that Trump’s level of support is enough to sustain himself in the polls, but he’s going to need these “Trump will bring change” voters to move decidedly into his camp by November. That’s the only way the needle is going to change.

NBC News’ Chuck Todd mentioned that this hasn’t really happened. So, why did Clinton drop in the polls? Well, it seems that third party candidates (Green Party Jill Stein and Libertarian Gary Johnson) are siphoning more of Clinton’s voters into their camps than Trump. Todd said the two things to looks for are a) if Clinton can win these people back and b) are they even up for grabs for the Trump campaign? The number of those who don’t have a preference also spiked in the past few weeks.

These are delicate waters for Trump to wade into as we approach zero hour for election season 2016. We do have a weak Republican nominee who seems to be impervious to the attacks doled out by the Clinton campaign due to the mountains of political baggage hamstringing her from delivering deathblows. So, maybe the Trump campaign can actually start aggressively releasing their own attack ads; an opportunity that was blown when FBI Director James Comey highlighted Clinton and her staff’s extreme carelessness in handling classified material. Instead, we’re getting these rather bizarre remarks that Trump can win without Pennsylvania.

Just so we’re clear—Trump needs to win Florida and Pennsylvania to have a shot at the presidency, but these are states in which the Republican nominee has closed the gap significantly. Florida is very winnable for Trump, though the campaign only has one field office, which is insufficient. It seems the billionaire is banking a lot on the debates, though good debate performances aren’t guarantees that every Trump voter, Republican voter, and independent-Republican leaning voter will show up on Election Day. And Trump needs every vote he can get on November 8.

Yet, ABC News’ Matthew Dowd mentioned that Clinton has to do something to turn this around to make this about Donald Trump’s temperance as president. If it continues to be about her, he warned—she loses this election.

He also said that she, like Trump, is banking a lot on these upcoming debates—and she should also hold a press conference to neutralize what is going to be an obvious line of attack by the real estate magnate.