Coming To America: 10,000th Syrian Refugee Could Arrive This Week; UPDATE: This Afternoon 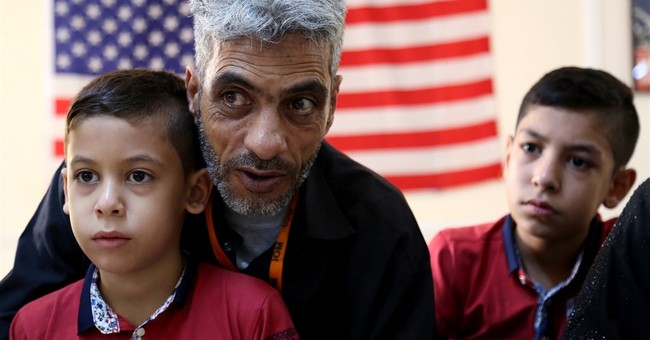 President Obama promised to resettle 10,000 Syrian refugees in the country and now that day has come. The 10,000th refugee is set to enter the country sometime this week (via Associated Press):

The U.S. will reach its target this week of taking in 10,000 Syrian war refugees in a year-old resettlement program, the U.S. ambassador to Jordan said Sunday, after meeting families headed to California and Virginia.

The resettlement program has emerged as an issue in the U.S. presidential campaign, with Republican nominee Donald Trump alleging displaced Syrians pose a potential security threat.

Alice Wells, the U.S. ambassador to Jordan, said Sunday that keeping Americans safe and taking in some of the world's most vulnerable people are not mutually exclusive.

"Refugees are the most thoroughly screened category of travelers to the United States, and Syrian refugees are subject to even greater scrutiny," she said.

Wells said the target of resettling 10,000 Syrian refugees in the U.S. in the 2016 fiscal year will be reached Monday, as several hundred Syrians depart from Jordan over 24 hours.

The resettlement of refugees caused controversy last year when governors from at least 31 states said they would refuse to allow refugees into their states, given the glaring lack of security screening. The FBI admitted that they couldn’t screen everyone, which heightened security fears, especially after the 2015 ISIS attacks in Paris. Democrats mocked the GOP position, which even some liberals viewed as totally out of touch with mainstream America, who are nervous about the rise in global Islamic terror attacks. Kevin Drum at Mother Jones noted that this could rehash the narrative that Democrats are weak on national security.

Regardless, the 10,000th refugee is coming, but let’s not kid ourselves that Islamic terrorists are embedded with these hordes of Syrians fleeing their nation’s brutal civil war. In 2009, two al-Qaeda operatives feigned refugee status from Iraq. Luckily, they were caught, but not after the U.S. put a hold on processing refugee claim from the country for six months in 2011.

UPDATE: The 10,000th refugee will be here this afternoon.