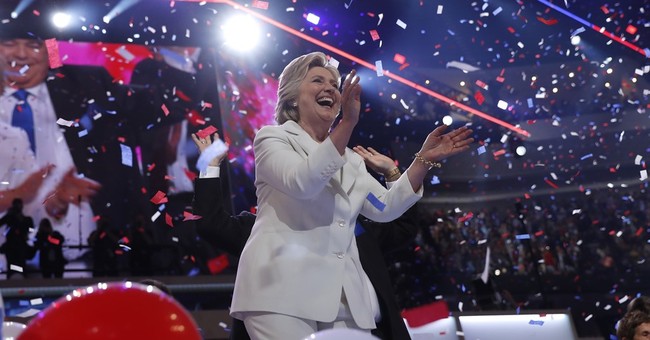 Well, folks—the time has come. Hillary Clinton formally accepted the Democratic nomination for the presidency of the United States. Her daughter, Chelsea, introduced her mother before her remarks to the attendees and delegates at the Democratic convention in Philadelphia.

Chelsea said that she was a proud Democrat, mother, and daughter. In an effort to humanize her mother, she said that her daughter Charlotte loves Elmo, and face timing with grandma. She said that her mother would drop everything to spend time with her grandkids. One of her fondest memories growing up was her falling down, being picked up b Hillary, who gave her a big hug—and then proceeded to read “Goodnight Moon.”

As she grew up, Chelsea said that her parents expected her to have opinions back up with facts. She always felt that her parents loved her—and would be there for her. She added that’s how her mom feels about every child in the country, calling it her calling in life that America’s children deserve care and attention.

She described the bad moments growing up in a family whose business was politics. One of those low moments was in 1994, when Hillary lost the fight to enact Clintoncare. She said it was pretty tough to watch, but family movie nights helped in the recovery. Hillary would then be back out in the battlefield that is American politics. People have asked Chelsea how does Hillary do it? Chelsea said that her mom never forgets whom she’s fighting for.

Chelsea added that in her mom’s career as a public servant, she made it easier of 9/11 responders to receive the health care they needed, for women around the world to be safer, treated with respect and dignity—and have more opportunities to better their lives. She also made it easier for families to adopt. She also said that women’s rights are also human rights, as are LGBT rights, here at home and abroad.

Most of all, the former first daughter closed by saying she has seen that we do better when we come and work together. She then introduced her mother, Hillary Clinton, to an uproarious round of applause from the crowd.

Clinton laid out a buffet of progressivism that she hopes to serve to the American people. She first thanked the attendees for a great convention; thanked Chelsea for the mother and woman she has become; and her husband Bill—noting that the conversation they started in the library at law school still goes strong 45 years later. She said that in that period she was able to get more than a few words in, while being partnered with the explainer in chief. As with any marriage, and we all know what happened around 1998, there were good times and bad, but they got through it. She added that she was happy to see that he’s still on the job, noting his Tuesday night address. She also thanked her friends and family—and her supporters, those who have been with her from day one to the newcomers, for their work throughout this convention and this campaign.

Trying to piggyback off the popularity of both Presidents Clinton and Obama, she said that we heard from a president from Hope—bill—and a man from hope—Obama—during this convention. Clinton added that America is better for Obama’s leadership, and that she is better because of her friendship with Obama. In the spirit of unity, Clinton thanked former rival Sen. Bernie Sanders (who looked like her was having the worst time of his life) for putting economic and social justice issues front and center where they belong; inspiring million of Americans to join his left wing crusade; and declared that his cause is now her cause. She added that Demcorats needed his energy, passion, and ideas to turn their progressive agenda into real change for the country. Hillary’s remarks drew chants of “Bernie!” from his supporters, wearing neo t-shorts that dotted the convention hall.

Clinton then spoke about the origins of the American Revolution, why they’re having their convention in Philadelphia, which was the center where our Founder embraced the enduring truth that we’re stronger together. She cited the art of compromise that was deployed that eventually led both factions present to join and sign a Declaration of Independence from the British Crown. Now, those bonds of trust are fraying and powerful forces are working to tear us apart. She said in this election, we have to decide whether we’ll work together so we can all rise together

Clinton invoked our country’s motto – out of many we are one—will we stay true to that motto?

Well, we heard Trump’s answer in Cleveland last week, she said. He wants to divides us from the world and from each other.

“He has taken the Republican Party from morning in America to midnight in America,” she added. Yet, she referenced Franklin Delano Roosevelt, who said, “The only thing we have to fear is fear itself.”

She declared that we are not afraid, we will rise to the challenge, we will not build a wall, but an economy where everyone who wants a good job can get one; we’ll create a pathway to citizenship to immigrants who are already contributing to the economy; we will not ban a religion; and we will work with all Americans and our allies to fight and defeat terrorism.

Clinton said that we have the most dynamic and diverse people in the world, and the most tolerant and generous young people we’ve ever had. We have the most powerful military, the most innovative entrepreneurs, and the most enduring values of any country—all of this adding the Democratic narrative that our best days are ahead. These socioeconomic factors are the foundations of that hypothesis.

Clinton then went on to provide a stark contrast with Republican nominees Donald Trump. She warned to never believe anyone who says he can fix anything alone.

“Really?” questioned Clinton. She went on to say that a mindset like that leaves behind the troops on the front lines, police and firefighters who protect us, the doctors and nurses who care for us, and the teachers who shape lives. In America, Clinton added, Americans say we’ll fix it together.

Clinton then invoked the Founders again, noting that they drafted a constitution where no one person can control all the power. Power was dispersed and for 240 years we still put our faith in each other. She said we should look at Dallas after the five police officers were assassinated. Chief of Police David Brown and the city came together and 12 days after the attack, 500 people had applied to join the force.

It was after this jab at Trump that Clinton, with humility and great determination accepted the Democratic Party’s historic nomination for the presidency of the United States.

Clinton then discussed about her family upbringing, how they did not have names on big buildings growing up. Instead, she said her family was different builders, ones who used whatever tools they had and whatever life in America provided to build better lives and futures. He father started his own business after a stint in the Navy after Pearl Harbor. Her parents abandoned her mother at a young age, eventually finding work as a housemaid at age 14, which led to her teaching young Hillary that no one gets through life alone. Clinton said that her mother made sure that she learned the words (and I’m paraphrasing here): do all the good you can, for all the people you can, for all the ways you can, for as long as you can. It’s this mindset that led her to grab her first job at the Children’s Defend Fund in Bedford Massachusetts because every kid with a disability had the right to go to school.

Clinton also gave another hat tip to Obama and Vice President Joe Biden, saying they did not receive their fair share of the credit for saving us from the brink to total disaster.

The former first lady then gave a rallying cry for people to join her, but before that she had to offer a sweetener of appointing Supreme Court justices who will take on the non-issue of money in politics and expand voter rights. If we have to pass a constitutional amendment to overturn Citizens United, then so be it. That drew a loud applause line, which is sort of disconcerting since these liberals were cheering the erosion of First Amendment rights.

Nevertheless, if you support climate change, comprehensive immigration reform, and the belief that companies should share their profits instead of padding executives with bonuses—join us! If you believe the minimum wage should be a living wage and children should be raised in poverty—join us!

She also said that if you believe in affordable health care, if you’re against unfair trade deals (rich, since she called the Trans-Pacific Partnership the gold standard in trade deals),if you want to stand up to China, if you support steel workers, if you support auto workers, and if you support homegrown manufacturing—then join us! Oh, and if expanding social security and protecting abortion rights are important to you, then hop on the Clinton train.

Clinton devoted very little to national security, a good move since her email flap sort of cuts into her ability and judgment on this front, but added that to defeat ISIS she will strike their sanctuaries, increase intelligence assets to prevent attacks, and support the ground troops already fighting them. It won’t be easy, but Clinton assured American victory.

She then tore into Trump for calling our armed forces a disaster, which she says is a sign of disrespect to the men and women who wear the uniform. She then said that a man who you can bait with a tweet should be nowhere near the nuclear codes.

Clinton also said that we couldn’t have a president who’s in the pocket of the gun lobby.

“I’m not here to repeal the Second Amendment. I’m not here to take away your guns,” she said. But added that she doesn’t want us to get shot from someone who shouldn’t have a gun in the first place. She promised to work tirelessly with responsible gun owners to pass common sense reforms and keep guns out of the hands of criminals and terrorists.

The former secretary of state then asked for us to be more empathetic, to put ourselves in the shoes of black and Hispanic Americans who are subjected to institutional racism—and the police officers who put their lives at risk to protects us every day. Clinton promised to sass criminal justice reform and rebuild community policing, declaring that we will defend all of our rights. We will stand up against mean and divisive rhetoric.

Piling more on Trump, Clinton said that America is great because America is good. Let’s cut out the bigotry and bombast. There’s a clear agenda with Clinton, and empty promises from Trump.

“The choice is clear, my friend” said Clinton, as she closed her remarks. Let’s be stronger together, and let’s look to the future with courage and confidence. Let’s build a better tomorrow. And when we do, America will be greater than ever.

Guy has his analysis, which you can read here. But one thing that was clear is that the party is still fractured. Notice all of the weird instances in which “Hillary” was being chanted by the crowd. Well, that was done to drown out the Bernie supporters who are still struggling to come to grips with the fact that their side lost.

The occasional heckling is leading to "Hillary" chants forcing Clinton to raise her voice.

Crowd moves to squash "no more war" cheers with "Hillary!"

Hillary can barely get through her speech, interrupted by cheers of "Hillary, Hillary," which is trying to drown out the boos. #DemsInPhilly