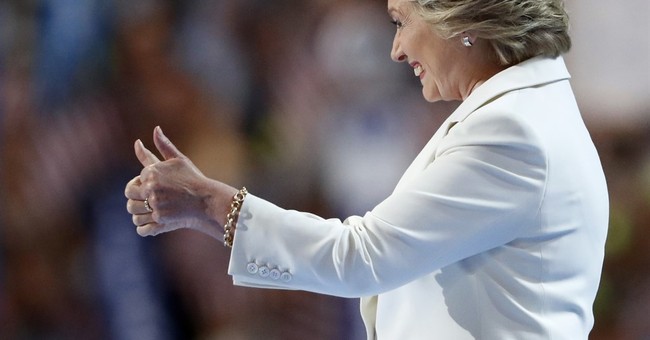 It's finally, blessedly over. As expected, Hillary Clinton's anticlimactic acceptance speech capped off a Democratic convention at which two of the weakest primetime speeches were delivered by the the two members of the nominated ticket. There were powerful moments earlier in the evening -- including an impactful address by the father of a Muslim US soldier who paid the ultimate sacrifice for his country in Iraq, and an address from a valorous Medal of Honor recipient, who was shamefully heckled by some DNC delegates. But when the lights shone brightest, we got a perfectly nice little talk by Chelsea Clinton, an over-the-top 'Heroine Hillary' introductory video, and a over-long, mediocre, robotically-delivered address by the woman of the hour. Pete Wehner, a senior speechwriter for President Bush and an exceptionally harsh conservative critic of Donald Trump, rendered this assessment of her performance:

What a dismal speech -- poorly written, even more poorly delivered. In the biggest speech of her life, she fell flat.

Some bits were better than others, but Clinton only seemed to truly come into her own when she was attacking Donald Trump -- her longtime friend and donor, whose wedding she attended. Hillary quoted Trump's infamous statement that he understands ISIS better than our generals. She looked into the camera, ice cold, and unleashed one of several stinging lines:

"A man you can bait with a tweet is not a man we can trust with nuclear weapons."

"There is no other Donald Trump. This is it."

Alas, there is also no other Hillary Clinton. This is it.  If only she and Donald had taken some voice modulation lessons -- maybe (stronger) together? -- a few weeks ago, things might have been better.  They weren't.  In any case, even if you're inclined to agree with her temperament critiques of Trump (as I am), it's quite rich listening to a woman who knowingly compromised high-level secrets for her own selfish reasons and lied repeatedly about it lecture anyone about trust and national security.  The rest of her speech was almost entirely unmemorable -- although newscasts will love her 'break the ceiling, sky's the limit' formulation.  She talked a little bit about her upbringing and family, she tossed a few bland rhetorical scraps to independent and Republican-leaning voters, and she rattled off a laundry list of liberal-left agenda items.  She made sure to highlight her strong opposition to Citizens United -- because this woman is so terribly offended by money in politics, you see -- failing to mention that the ruling she abhors literally overruled the government's censorship of a film that was critical of...Hillary Clinton.  She also condemned "mean and divisive rhetoric," which seems apt in an age of Trump. But once again, physician, heal thyself. As I predicted, Donald Trump earned a clear polling bounce out of Cleveland. It may or may not be receding. I would be surprised if Clinton doesn't garner one from the program in Philadelphia, too.  But because this is 2016, and because the commentariat was largely enamored with the Democrats' gathering, this is a reasonable caveat:

Most pundits doubted how disjointed RNC could produce a Trump bounce. If pundits blown away by DNC, doesn't guarantee a Clinton bounce.

By mid-August, the polls will likely have 'settled' a bit, and we'll have a better sense of the dynamics of the post-conventions horserace.  And then come the debates.  I'll leave you with a sentiment I felt acutely while watching the final evening of the DNC proceedings, and some sorely-needed levity:

I cannot support most of their agenda or their lying nominee.

But (with exceptions), the Democrats are totally outclassing us.

The most amazing thing about tonight is that Hillary is giving this speech for free.