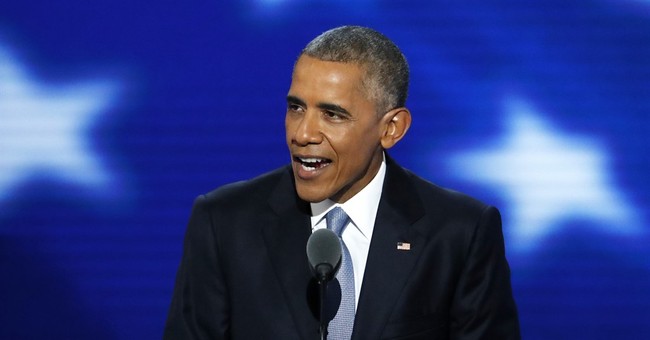 As Cortney noted on Monday, out of 61 speeches delivered that night—none mentioned ISIS. Now, after last night, which featured Vice President Joe Biden, Sen. Tim Kaine (D-VA), and President Barack Obama as speakers, you would hope that the president would mention the threat we face from this Islamic terrorist group. Oh yes—the Republican National Committee was watching as well.

During the president’s speech that was prefaced by a video in which history did not begin until 2008 (or so it seemed), Obama praised Clinton (of course), tore into Trump, and said that America was already great. He also said that the Republican National Convention was fraught with pessimism (via ABC News):

"A lot’s happened over the years. And while this nation has been tested by war and recession and all manner of challenge -– I stand before you again tonight, after almost two terms as your President, to tell you I am even more optimistic about the future of America," he said.

"I can say with confidence there has never been a man or a woman more qualified than Hillary Clinton to serve as President of the United States of America," he declared.

"This is a more fundamental choice -– about who we are as a people, and whether we stay true to this great American experiment in self-government," he said. "We Democrats have always had plenty of differences with the Republican Party, and there’s nothing wrong with that; it’s precisely this contest of ideas that pushes our country forward."

In a remarkable series of broadsides leveled at Clinton's opponent, Obama rebuked Trump and the dire picture painted of the country by the GOP presidential nominee.

"He’s not really a plans guy. Not really a facts guy, either," he said of Trump. "He calls himself a business guy, which is true, but I have to say, I know plenty of businessmen and women who’ve achieved success without leaving a trail of lawsuits, and unpaid workers, and people feeling like they got cheated."

He did mention ISIS, though–twice. But, as Sean Spicer, communications director for the RNC noted, there was no mention of Iraq, where we’re deploying more troops; no mention of Israel; no mention of Libya (Benghazi); no mention of his push to sign the Trans-Pacific Partnership (TPP) into law; and no mention that the national debt has surpassed $19 trillion.

TPP isn’t the most popular swan song for the president to include on his playlist right now, though he seems to want to make signing it into law his last major act as president. The national debt has grown under Obama, which isn’t good—and it’s not like debt matters to Democrats anyway. You mention Benghazi, and then the media starts the whole inquiries into Clinton about her role—where she recently told CBS News’ Scott Pelley that security wasn’t her “ball to carry.” This also leads back into her email fiasco, which every Democrat so desperately wants to move on from, but can’t because we’re now debating whether the Democratic National Committee tried to rig the election for Clinton when she faced Sen. Bernie Sanders in the primaries. It sure injected a dose of animus into the Bernie camp present in Philadelphia. They’re playing it safe, though it still doesn’t shield the president from awkward moments, like when he said that Clinton would say anything to get elected—and a person who would change nothing in Washington.

Nevertheless, I guess the Democrats get a cookie (or gold star) for at least acknowledging that there is a vicious radical Islamic terrorist group called ISIS, they’re operating in Iraq, and they really want to kill us.