Clinton On Benghazi: Security Was ‘Not My Ball To Carry’ 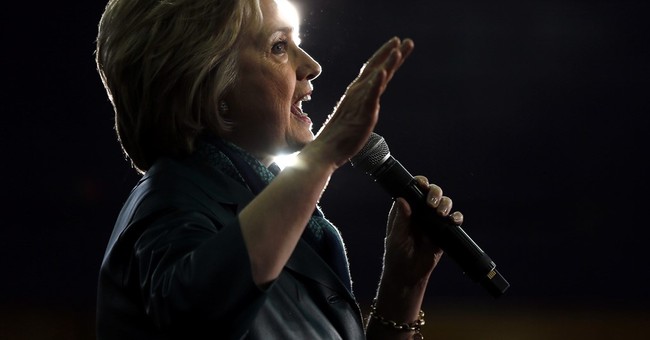 In their first joint appearance since the announcement of the full Democratic ticket, presumptive Democratic nominee Hillary Clinton, and her running mate Virginia Sen. Tim Kaine were interviewed by CBS News’ Scott Pelley, where the issue of the Benghazi terror attacks were discussed.

“What’s your responsibility for Benghazi? Did you make any mistakes around that?” asked Pelley.

Clinton responded by saying that she did take responsibility, as she was secretary of state, and looked into what really happened–not what people have claimed in the media or on Capitol Hill. She said that she looked into what could be done to prevent another Benghazi at our various diplomatic missions around the world. Clinton cited precedent in Congress and the governing administration coming together to find such solutions, citing the 1983 Beirut bombings of the U.S. Marine Corps barracks by Hezbollah. Instead, she noted how the proceedings became overly politicized.

The former first lady mentioned that she set up an independent committee made up of distinguished Americans and civilian experts, who pointed out that the ball was dropped on security and that some decisions that were made should’ve been reconsidered.

“But wasn’t that your ball to carry?” asked Pelley.

“No, it wasn’t. It was not my ball to carry. It was—read the reports. Read all the reports, all many hundreds of pages of them, including this latest one which was a political exercise from the very beginning. Those never reached me. Those never came to my attention,” replied Clinton.

“The concerns about the security never came to you attention, they didn’t reach you,” said Pelley clarifying Clinton’s answer.

Well, for starters, Clinton lied about her private email server, she lied about classified material being sent through that server, she lies about the reason the server was set up, and she lied about asking State Department officials about setting up said server. The State Department did note that if Clinton had actually requested such a system for her electronic communications, it would’ve been rejected. The explanations from the Clinton camp over the former first lady’s avoidable email fiasco have been nothing but a series of lies. Hence, why anything about Benghazi isn’t going to shift the needle. Republicans are still going to think she’s somehow involved in the disaster that left four Americans dead when the Libyan compound was attacks by Islamic terrorists.

As for Beirut, that bombing and the Benghazi attacks do share one thing in common: both were criticized for being lax in their security protocols. At the same time, security for the diplomatic mission wasn’t her ball to carry? Emails show that Clinton’s top aides told her about the deteriorating situation in the region (via WSJ):

Then-Secretary of State Hillary Clinton received emails from her top aides warning about dangerous security conditions in Benghazi, Libya, in the run-up to the terrorist attack that killed a U.S. ambassador and three other Americans there in 2012, documents disclosed on Friday show.

The messages were part of a batch of about 300 emails involving Benghazi that were made public by the State Department. State officials already gave the emails in February to a special House committee that is looking into the Benghazi attacks and is expected to take testimony from Mrs. Clinton.

The emails, in addition to what they reveal about the Benghazi attack, offer glimpses into Mrs. Clinton’s thinking and executive style. In an exchange with aides about to testify on Capitol Hill, she wrote: “Well, what doesn’t kill you makes you stronger (as I have rationalized for years), so just survive and you’ll have triumphed!”

One cautionary email sent to her long before the Sept. 11, 2012, terror attack came from longtime aide Huma Abedin. The April 24, 2011, note cited reports that hotels in Benghazi were being targeted for attack.

The note said U.S. diplomat Christopher Stevens—who would later become ambassador and die the following year in the Benghazi attack—would be meeting with Libya’s Ministry of Foreign Affairs to make “a written request for better security at the hotel and for better security-related coordination.”

About two months later, in a June 10, 2011, email from Mr. Sullivan [Clinton’s then-deputy chief of staff], Mrs. Clinton was told of a “credible threat…against the hotel that our team is using.” The note said security officials would be moving personnel out to alternative locations.

Clinton kept to her story that State had security experts that decide on these matters at the lower level. Still, this seems to be a strange parsing of responsibility. Clinton took responsibility for the attacks because she was our top diplomat. The late Ambassador Chris Stevens was killed in the attack, but not bolstering security was not her fault because that’s incumbent on the security staff at the lower level? Just like you can’t get a little bit pregnant, you can’t just say responsibility ends at a certain level at the State Department.