Sanders Supporters To Reid: Wait–You Didn’t Speak Up When You Thought The DNC Was Rigging The Game Against Us 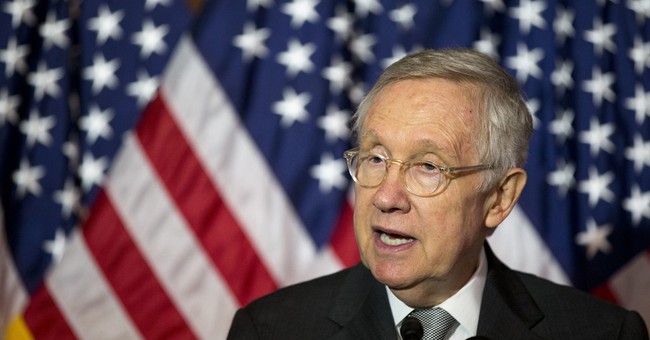 Senate Minority Leader Harry Reid (D-NV) said that he thought that the Democratic National Committee didn’t give Sen. Bernie Sanders a fair shake at the Democratic nomination, which we all knew, and that Rep. Debbie Wasserman Schultz was right to step down once Wikileaks released emails showing staffers scheming ways behind the scenes to derail the self-described Democratic socialist’s presidential ambitions. Now, Sanders supporters are saying what the heck, why didn’t you say this sooner at the party’s convention in Philadelphia (via The Hill):

The retiring Democratic leader faced multiple questions about Sanders, the party as a whole and progressive flash points over a roughly half-hour question-and-answer session at a state delegate meeting.

He was immediately questioned by a delegate who asked why Reid didn't "speak up earlier for Bernie Sanders" after saying this week that the Democratic National Committee (DNC) hadn't been "fair" with him.

Reid has repeatedly refrained from criticizing Sanders for refusing to drop out of the Democratic primary and sharply told reporters to "lay off" him amid criticism in late May.

In a contentious moment, a Sanders backer — who described himself and other supporters as "victims" — asked to know Reid's stance on the Trans-Pacific Partnership (TPP) amid groans and murmurs of "no" from other delegates.

So, as you can see, all is not well in Democrat land. There are also allegations that the DNC is busing in people to fill the empty seats in the convention hall to give the veneer of party unity. It’s quite possible that 30 percent of the Sanders coalition could go third party in November, which only helps Donald Trump. Clinton’s task in unifying her party is something to watch from this night forward.

Also, look out for the Sanders delegates tonight––they'll be wearing the neon green t-shirts.

Bernie delegates making their presence known at DNC. But they tell me it's not a protest, just nod to Sanders. pic.twitter.com/T8fbpZ8qsi

Bernie delegates' shirts glow in the dark. Should be quite a visual effect during the main program. pic.twitter.com/rlZB9bKiJB