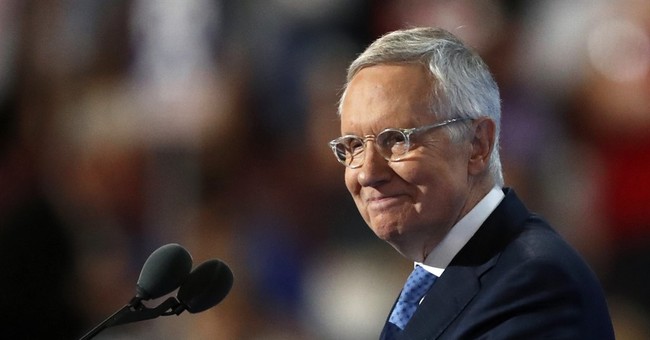 From calling the GOP field losers to lying about Mitt Romney not paying taxes in a decade, the outgoing Senate Minority Leader is just saying pretty much whatever the hell he wants. He’s out. He’s done. Let’s have some fun. While known for raising the blood pressure of Republicans often, Reid now seems to be agreeing with the Bernie camp over the leaked DNC emails that showed staffers might be trying to rig the primary for Hillary Clinton. At the Democratic Convention in Philadelphia, Reid said that Sanders never got a “fair deal” (via Huffington Post):

Debbie Wasserman Schultz, she’s always been good to me. I like her just fine,” Reid said. “I know she’s tried hard, but as some people probably know, I thought Bernie deserved somebody that was not critical to[ward] him. I knew ? everybody knew ? that this was not a fair deal. So I’m sorry she had to resign, but it was the right thing to do. She just should’ve done it sooner.”

“Bernie really had a movement out there, and it wasn’t right to treat him that way,” Reid said.

So, there you have the most senior Democrat in the Senate agreeing with the Sanders camp that the disheveled Democratic socialist didn’t get a fair shake. Not the best thing when it comes to fostering unity, as 30 percent of Sanders supporters could go either to the Greens or Libertarians. Clinton’s task of bringing this group together might be a more monumental task—and Sen. Tim Kaine surely isn’t an added bonus in that effort. Both he and Clinton are darlings of Wall Street. Let’s see what happens. The Clinton camp completely miscalculated the staying power of her email fiasco. This could be another misfire waiting to happen.