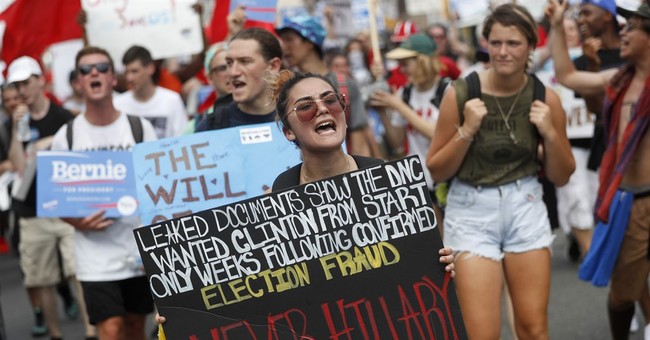 Delegates for Bernie Sanders have spoken out against the DNC for hiring seat fillers to replace protesting Sanders supporters.

While many Sanders delegates were outside staging protests during the convention Wednesday, every seat in the arena was filled, giving the impression that the delegates had unified around their nominee, Hillary Clinton. Several Sanders delegates have posted videos claiming that many of those in the delegates’ seats were not delegates at all, but seat fillers paid for by the DNC.

Sanders delegate Nancy Kim posted a video with a man who said he was a seat filler.

“Because our people—the Bernie people—went outside to do a press conference, he was just given a credential,” she said. “Right?”

“And he came to be a seat filler.”

Sanders delegate Jeff Day posted a video with his own observations of seat filling.

“I got here around 5:30 or 6 o’clock, and when I got here it was empty,” he said. He explained that many Hillary delegates were attending events outside the convention and many Sanders supporters were protesting outside. Suddenly, however, the convention center was full.

“The convention is full now. Every seat in the house is full. Those seat fillers you guys were talking about? It’s real. They’re in here now. There are a lot of people sitting near me who I don’t know or have seen since I’ve been here.”

Challenging the media coverage which stated the convention looked “more unified,” he said, “It’s because the Bernie people aren’t here!”

“There are a lot of people here that aren’t delegates who are standing and clapping and cheering for somebody that we aren’t ready to believe in,” said Day. “The media needs to know, so they stop telling everybody in America that we’re together, because we’re not together yet. There’s a lot of work left to be done.”

"Don't believe what you see on TV."

Day posted another video Thursday morning suggesting that Sanders supporters stage a sit-in Thursday night. He proposed that the Sanders delegates sit silently as Clinton and others give their speeches, rather than protesting outside and having their seats be taken by cheering stooges. He hopes their silence will signal that the Democratic Party has not unified around Clinton—contrary to media reports.