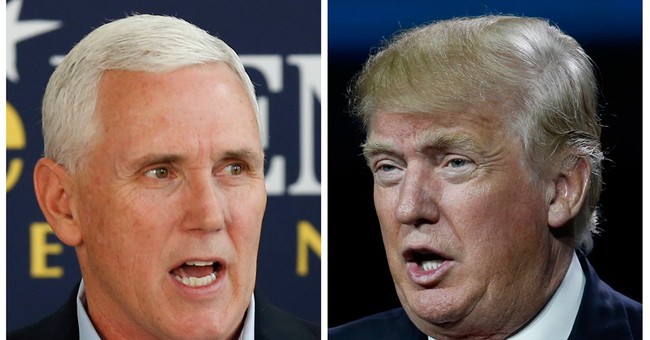 UPDATE: The Indy Star confirmed that Gov. Mike Pence is going to be Donald Trump’s running mate. As a result, the Indiana governor has nixed his plans to run for re-election.

IndyStar has confirmed that Trump plans to announce Pence as his selection for vice president, ending a weeks-long vice presidential casting call during which Trump vetted a handful of high-profile Republicans

Katie also wrote that  Trump's campaign manager, Paul Manafort, and senior communications adviser, Jason Miller, tweeted that no decision has been made. Yet, The Hill and CBS News' Major Garrett are confirming that Pence will be Trump's VP pick. We'll keep you updated

UPDATE III: Gov. Pence has reportedly en route to NYC area via airplane. Newt Gingrich said that whoever is the VP needs to know by today in order to head to New York for the announcement.

Just into @CNN: Donald Trump has called Indiana Gov. Mike Pence and offered him the vice-presidential slot on his ticket. Pence accepted.

UPDATE V: In light of what appears to be a horrific attack in Nice, France, Trump has postponed his news conference for tomorrow, where Indiana Gov. Mike Pence was supposed to be introduced as his running mate.

In light of the horrible attack in Nice, France, I have postponed tomorrow's news conference concerning my Vice Presidential announcement.

While the announcement isn’t expected until Friday, a Republican with knowledge of the veepstakes told Roll Call that Donald Trump plans to pick Indiana Gov. Mike Pence as his running mate. Patricia Murphy wrote, “In addition to testing the men's chemistry together, Trump was reportedly impressed with Pence's calm demeanor, his experience on Capitol Hill and as a governor, and Pence's potential to assist Trump in governing, should the ticket win in November.”

Newt Gingrich has also been speculated to be considered as Trump’s running mate as well. Trump’s campaign manager, Paul Manafort, along with his children, met with the governor yesterday.

Gov. Pence recently sealed his congressional library until 2022. The records could be unsealed if the governor were to die before that date. That’s 12 years' worth of records from his time in Congress. Michael Cherkis of The Huffington Post spoke with the archives director, Dina Kellams, at the University of Indiana in Bloomington, where the records are kept. She said, “It’s not standard but it’s not unusual.”

There were many inferences about how Ohio Gov. John Kasich was a good general election candidate, despite his less than stellar performance in the 2016 primaries. Trump’s base of support is from white, working class voters—and Indiana (and Ohio) is ground zero for that slice of the electorate, which the Trump campaign sees as their ticket to 1600 Pennsylvania Avenue. Perhaps, that’s why Trump decided to pick someone from the Rust Belt to help consolidate that support. Indiana is known as the RV capital of the world, and a state dotted by factory workers in what once was a bastion of American manufacturing.

Hillary Clinton, who is weak on trade, is vulnerable with these voters, who view North American Free Trade Agreement (NAFTA) as the source of their job losses. They also hold the contested Trans-Pacific Partnership (TPP) agreement the Obama administration is trying to push through with equal scorn. Hillary supported Bill’s signing of the NAFTA, and once called TPP the gold standard for trade agreements. This flip-flopping on trade, coupled with her abysmal numbers on trust and honesty, make her even more vulnerable to someone the likes of Trump, who is also a flawed candidate. Nevertheless, he was never under an FBI investigation. Director James Comey's damning report on Clinton's email usage while she was secretary of state also didn't do her any favors. She’s polling in a dead heat with Trump, erasing her 8-to-10 point lead.

Those emails matter, her position on trade with these voters matter, and she’s just generally not liked. Neither is Trump, but in the pick your poison contest that’s being held right now, more are seeing Trump as the lesser of two evils.

Trump is leading Clinton in Florida and Pennsylvania; they’re tied in Ohio. In all three of these battleground states, Trump leads Clinton on character questions such as trust and honesty. Quinnipiac, which conducted the poll, doesn’t see a link between Clinton’s eight-point drop and the FBI’s findings over her emails, but they noted, “She has lost ground to Trump on questions which measure moral standards and honesty."