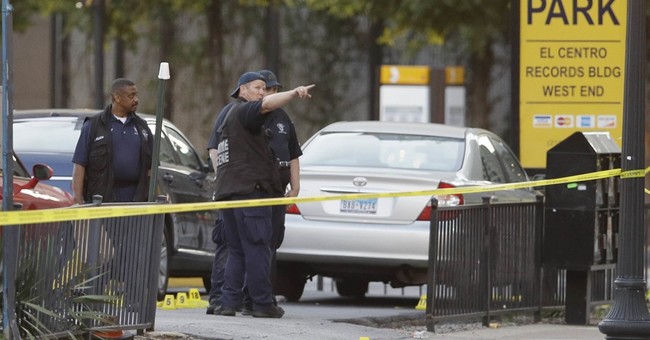 UPDATE: Caleb Howe at RedState noted another shooting against a police officer that occurred in Georgia today:

Also in Georgia, also this morning, a police officer in Roswell was shot while on patrol. A man fired at the officer from his car. The officer pursued, the suspect crashed his vehicle, and he is now under arrest. He was in possession of methamphetamine and is charged with, among other things, driving a stolen vehicle. However, the officer on patrol did not know any of that and was not pursuing him. The officer was unhurt.

BREAKING: Police say officers have been targeted in Tennessee, Georgia, Missouri in aftermath of police killings of black men.

We all know about the horrific shooting in Dallas, Texas that left five officers dead, the worst attack on law enforcement since 9/11 and one of the deadliest assaults against cops in the past 100 years. In Tennessee, a man opened fire on police and innocent bystanders on a highway, killing one person while injuring three, including a police officer. The perpetrator, Lakeem Keon Scott, committed this crime over his frustration over police-related shootings.

In Georgia, this incident involving shots being fired against police seems to not be related to the Dallas attack, but it's still an instance where a cop was targeted. A man called 911 to report a car break-in and then ambushed the responding officer when he arrived at the residence. The officer was hit three times; two bullets hit his bulletproof vest, while the third round entered his abdomen (via Associated Press):

The Georgia Bureau of Investigation says in a news release that 22-year-old Stephen Paul Beck called 911, saying his car was broken into Friday morning. Officer Randall Hancock came to investigate, and police say Beck shot at him as soon as he got out of his car.

He was hit twice in his protective vest and once beneath the vest in his abdomen.

In Missouri, a routine traffic stop ended with an office being shot in the neck (via St. Louis Post-Dispatch):

The wound was in the neck and the male officer was taken to Mercy Hospital St. Louis, in Creve Coeur, the sources said. There were no details about his condition.

It happened along New Ballwin Road, near Old Ballwin Road. A suspect was reported to be in custody after a foot chase in the area of Burgundy Drive, several miles northeast of the shooting scene.

The Associated Press reiterated these incidents in their coverage of the Dallas shootings, where shooter Micah Xavier Johnson told police negotiators that he was upset with white people, that he wanted to kill them, especially white police officers, and that he was angered by the recent strong on officer-involved shootings in Louisiana and Minnesota:

The other attacks on police included a Georgia man who authorities said called 911 to report a break-in, then ambushed the officer who came to investigate. That sparked a shootout in which both the officer and suspect were wounded but expected to survive.

In suburban St. Louis, a motorist shot an officer at least once as the officer walked back to his car during a traffic stop, police said. The officer was hospitalized in critical condition.

And in Tennessee, a man accused of shooting indiscriminately at passing cars and police on a highway told investigators he was angry about police violence against African-Americans, authorities said.

All of this should remind us that police work is hard, and it can be incredibly dangerous—to the point where you can lose your life for wearing the badge.