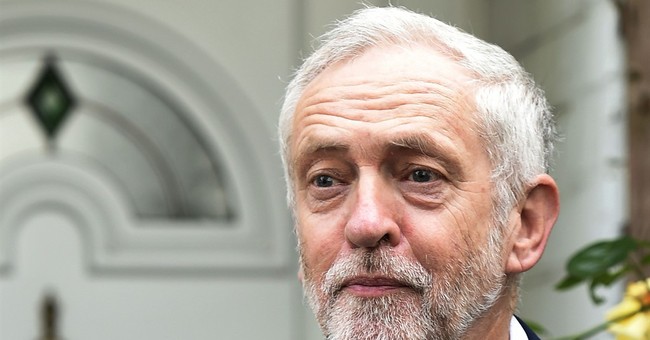 .@jeremycorbyn has compared Israel to ISIS today. For that alone, he should resign. I am red with fury #Corbyn

The UK’s Labour Party has been rocked by allegations that anti-Semitism is pervasive within its ranks. There was an inquiry as to whether there was a problem after a series of suspensions of Labour Party members for making such odious remarks. The findings of that report were released yesterday, which devolved into a total disaster. Jeremy Corbyn was accused of equating the Israeli government to that of the Islamic State. A Labour Party activist accused a Jewish Labour Member of Parliament (MP) of colluding with The Daily Telegraph. To make things more embarrassing, Corbyn had said that any insinuation that Jewish members are part of any conspiracy, whether that is financial or media-based, is wrong.

Yet, the report noted that Labour isn’t infested with anti-Semitism, but it does have bouts of an “occasionally toxic atmosphere.” So, it’s like a psoriasis flare up? We’re not an anti-Semitic, we just get bad flare ups (via BBC):

Shami Chakrabarti, the chairwoman of Labour's inquiry into anti-Semitism, said there was "too much clear evidence... of ignorant attitudes".

Leader Jeremy Corbyn said there was no acceptable form of racism.

He said: "To assume that a Jewish friend or fellow member is wealthy, some kind of financial or media conspiracy, or takes a particular position on politics in general or on Israel and on Palestine in particular, is just wrong.

"Our Jewish friends are no more responsible for the actions of Israel or the Netanyahu government than our Muslim friends are for those various self-styled Islamic states or organisations."

The phrase "toxic atmosphere" used in the inquiry report could well have described the mood towards the end of the press conference launching it.

Shami Chakrabarti had to intervene to stop the question-and-answer session becoming an inquisition on Jeremy Corbyn's leadership.

There was a melee as the Labour leader was pursued out of the room by reporters and photographers.

Oh, and let’s not forget the berating of a Jewish Labour MP that was thrown in during the press conference for being in “cahoots” with The Daily Telegraph. The UK Independent  reported that the man, identified as Marc Wadsworth, a Labour activist, denied being part of Momentum and did not know MP Ruth Smeeth was Jewish.

“Jeremy said something flim-flammy that he didn’t support abuse and people must be respectful,” said Wadsworth. “I thought he could have been more robust than that, and said that people have strong views and it’s about freedom of speech – and what about the Telegraph working hand in glove with that Labour MP Ruth Smeeth. That’s the sort of company they’re keeping, these MPs.”

Smeeth was present at the news conference and stormed out after hearing after Wadsworth’s accusations. The two had a run-in prior to the presser, where Smeeth had identified herself as one of the scores of Labour MPs who threw in the towel serving under Corbyn following the Brexit referendum, according to the Independent.

After the exchange, Wadsworth said he’s never been accused of anti-Semitism in his life, noting that he’s been a lifelong activist against racism, and that the Jewish people have an ally in him:

Witnesses said the campaigner accused the Labour MP for Stoke-on-Trent North and Kidsgrove of “colluding” with the right-wing media, after refusing to hand a leaflet to Ms Smeeth and taking down her name.

Ms Smeeth said she was “verbally attacked” and accused of being part of a media conspiracy.

“It is beyond belief that someone could come to the launch of a report on antisemitism in the Labour Party and espouse such vile conspiracy theories about Jewish people, which were ironically highlighted as such in Ms Chakrabarti's report, while the leader of my own party stood by and did absolutely nothing,” she added.

“People like this have no place in our party or our movement and must be opposed.”

The MP called for Mr Corbyn to resign after the incident, saying he failed to intervene.

Footage showed the man - Marc Wadsworth - calling a journalist from the Daily Telegraph a “trouble-maker” after she asked him whether he wanted to apologise.

His press release, claiming to be from Momentum Black Connexions, called for the deselection of Labour “traitors” who are calling for Mr Corbyn to resign in the wake of the EU referendum.

Mr Wadsworth told The Independent he did not know Ms Smeeth was Jewish, adding: "I've never been called antisemitic in my life."

So, to wrap up this little unveiling, the Labour leader shot himself in the foot by making tone-deaf remarks about the Israeli government and ISIS, Labour activists engaged in berating a Jewish MP for unsubstantiated claims that she’s in “cahoots” with The Daily Telegraph, and the Labour Party itself isn’t fraught with anti-Semitism, but it gets bad instances of it, like seasonal allergies. You just can’t make this stuff up, folks.

Flashback: When Prime Minister David Cameron hammered Corbyn for saying that Hezbollah and Hamas were his friends.