Yes, The UK Labour Party Has An Anti-Semitism Problem 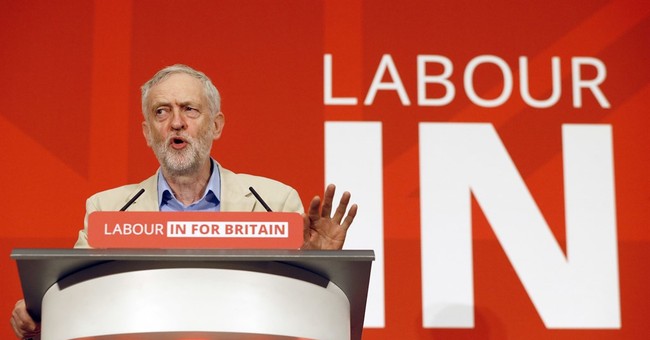 Remember when Britain’s liberals went insane when Conservative Prime Minister David Cameron won a majority government in the 2015 elections. The Labour Party was in disarray—so they decided to elect a hard left member, Jeremy Corbyn, to be their standard bearer in the House of Commons. Corbyn, a staunch critic of Israel, has been consumed by a crisis within his own party, as various party members have been accused of anti-Semitism. It’s not an isolated incident. We have Labour MP’s making remarks about Jewish people having “big noses,” being responsible for the 9/11 terror attacks, and supporting the ethnic cleansing of Israelis by wanting them to relocate to the United States. The former Mayor of London, Ken Livingston, described Hitler as a leader who supported Zionism because he had a policy of deporting all of them to Israel.

Labour MP Naz Shah posted the latter remark on Facebook in 2014. She has since apologized for the remarks and has been suspended by the party pending an investigation into the matter. While it was originally reported in Buzzfeed that her apology remarks were edited, it now appears

Without a doubt, there’s the same vicious sentiment with members of the right, but the political left is where this rot is more prevalent. The Guardian’s editorial board said that there must be renewed vigilance of this nasty form of racism on the left:

Complaints about antisemitism on the left have often cropped up over the years, and there is always an ill-advised temptation to shrug them off. Before the latest Livingstone fiasco, some of the Westminster voices who had been pressing the wider charge at Labour, which the PM flung across the Commons last month, were not known for being especially energetic in confronting prejudice over the decades, and this heightened the defensive reflexes. While a few Labour activists had been exposed for nakedly racist past remarks about Jews having “big noses” or plotting 9/11, one could protest that a handful of disturbed minds can always be found in any large organisation. Other dangerously intemperate comments, including some – but not all – of those that saw the whip suspended from MP Naz Shah, are principally expressions of anti-Israeli fury, and as such could be written off as an unfortunate byproduct of Middle Eastern conflict. Indeed, this is the trick Mr Livingstone tried to pull.

But by righteously brushing away any suggestions of a problem, the former London mayor, who did much to bring communities together after 7/7, greatly heightened the alarm. There can be no place in a progressive party for presuming – as Mr Livingstone did – to dictate to a minority the forms of hostility that it is entitled to resent. The tin ear he showed, and – above all – the offensive rants about Hitler’s policies before he “went mad”, earned his own suspension and should prompt wider reflection, too. For aspects of some recent cases – notably readmissions into the party after racism was established – point to something systematically awry, as does the sprawling row at Oxford University Labour club.

Mr Corbyn is not an antisemite, and his enemies should not cheapen that charge by suggesting he is. There is, however, a question – put even by some sympathisers – as to whether there has been a selective hesitancy in condemning failings on the part of others. There was a cack-handed response to his brother’s dismissive tweet about a Jewish MP a few weeks ago, and sluggish discipline: Ms Shah’s suspension came more than 24 hours after the first of her offensive posts came to light. He must now go beyond the routine denunciations and demonstrate that he – and his Labour party – is as instinctively attuned to this perennial virus as to every other form of racism.

Yeah, that’s a bit hard, given that Corbyn has called Hamas and Hezbollah, two organization that have called for the destruction of Israel, as “friends.”

Moreover, his guest hosting on the Press TV network, a network run by Iran, should further cast doubt as to whether Corbyn can successfully root out and deal with the anti-Semitic element within Labour. In the clip below, two callers call the Israel a “disease,” while another called the BBC “Zionist liars.”

Hamas has praised Corbyn and his ties to their organization as a sign that the Boycott, Disinvestment, and Sanctions movement, one that’s viciously anti-Israel, is making inroads.

Yet, there are some Labour leaders who see the problem, and want the party to take more drastic and immediate action (via BBC):

Lord Levy told BBC Newsnight he believed anti-Semitism existed across the political divide, but it seemed "more prominent" within Labour.

It follows the party's decision to suspend MP Naz Shah from the party over comments about Israel on social media, pending an investigation.

Lord Levy, who was Tony Blair's envoy and chief fundraiser, told the BBC her comments displayed "ignorance", and he was left "scratching his head with despair as to how people like this can enter our parliament with such a lack of knowledge, discretion and sensitivity".

His comments were echoed by cross-bench peer Baroness Neuberger, who claimed Labour's problem of anti-Semitism was "attached to Jeremy Corbyn becoming leader", and added that it was "an issue with the hard left".

Labour has faced claims of growing anti-Semitism in its ranks. Earlier this year a Labour Luton councillor was suspended from the party after claiming Hitler was the "greatest man in history".

Livingstone has been at the center of the controversy, which prompted him to resign from Labour’s National Executive Committee. Besides his Hitler remarks, he’s called the creation of Israel a “catastrophe,” and blamed the Jewish State for the Islamic State’s string of terror attacks across Europe. So, given this public relations nightmare, why do Labour MPs continue to bash Jewish people? Niall Ferguson wrote that it yields political dividends, especially for Shah who represents a constituency that’s over half Muslim:

It is not that Naz Shah is herself an Islamist. If she were, I doubt she would appear with her head uncovered in the House of Commons. It is just that bashing Israel appears to be an effective way of mobilizing Muslim voters, who account for roughly half the electorate in Bradford West. Nor is Bradford the only place in Britain where this goes on.

It was a difficult week for Sadiq Khan, the MP for Tooting, who also happens to be the Labour candidate in Thursday’s mayoral election in London. Khan lost no time in distancing himself from the last Labour mayor, condemning Livingstone’s comments as “appalling and inexcusable.” Yet, as the Evening Standard pointed out, Khan has done a few appalling and inexcusable things of own.

In September 2004, for example, he attended a meeting under the banner “Palestine — The Suffering Still Goes On,” hosted by the Friends of Al-Aqsa (the mosque in Jerusalem that is the third holiest site in Islam) and the Tooting Islamic Center. Invitations said “all welcome,” but a sign at the door made it clear that the sexes would be segregated.

Other speakers on the bill included the preachers Ibrahim Hewitt, whose book “What Does Islam Say?’’ likens homosexuals to pedophiles, and Suliman Gani, whom the prime minister named in the Commons on Friday as a supporter of Islamic State.

Emran Mian of the Social Market Foundation wrote that he was once a “thoughtless anti-Semite,” attributing his previous attitudes towards Jews as a byproduct of his upbringing. He noted that far too many British Muslims are anti-Semitic and do not go out of their way to meet and befriend fellow Jewish persons in their schoolwork or social lives—a huge roadblock to creating channels of communication that’s usually the first steps in stomping out this form of bigotry. Mian has since grown away from his former radical persona.

Still, while Mian is a liberal and no longer an anti-Semite, it seems a large swath of Labour embrace such views. So far, 50 members of the Labour Party have been suspended for anti-Semitism, which only highlights that Labour truly does have a problem. And it doesn’t look like it’s going away anytime soon.