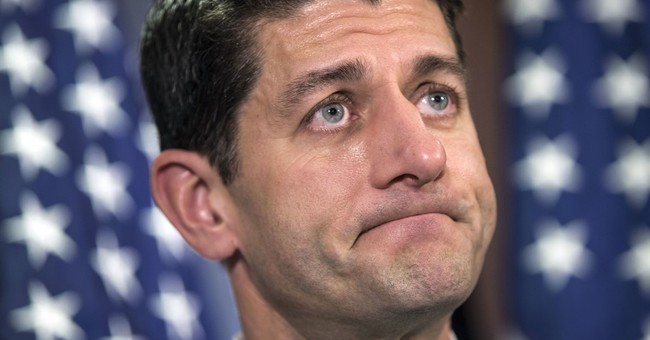 On GOP conf call, @SpeakerRyan announces House will vote next week on legislation to prevent suspected terrorists from buying guns

Speaker of the House Paul Ryan has bowed to House Democrats and will hold a vote on a gun control bill that will prohibit persons on terror watch lists from buying firearms (via Reuters):

U.S. House of Representatives Speaker Paul Ryan told Republican lawmakers on a conference call that the House will vote next week on a measure intended to keep guns out of the hands of people on terrorism watch lists, according to a knowledgeable source.

House Republican leadership refused to provide details of the legislation, which Ryan said would be part of a larger terrorism package. A Democratic aide speculated that the measure could be a House version of a Senate Republican measure backed by the National Rifle Association.

But the aide, a spokeswoman for House Democratic leader Nancy Pelosi, said Democrats had not been briefed on Ryan's plans.

This announcement comes a week after House Democrats staged a 24-hour sit-in to pressure Ryan and House Republicans to hold gun control votes. The Democratic effort to bring such votes to the floors of the Senate and House started by Sen. Chris Murphy’s (D-CT) 15-hour filibuster of a Department of Justice spending bill on June 15. Murphy wanted to vote on two amendments that involved expanding background checks and making sure those on terror watch lists cannot buy guns, despite the egregious lack of due process inherent in these secretive government lists. All gun control amendments eventually were voted down along party lines.

On June 22, Rep. John Lewis (D-GA) spearheaded “Occupy Congress” in the House, which was a fundraising event, something that Speaker Ryan pointed out while blasting Democrats for degrading the institution with their antics. Rep. Brad Sherman (D-CA) even admitted that the sit-in was a form of politicking on gun control, despite Minority Leader Nancy Pelosi (D-CA) saying the exact opposite in a news conference on the day the fireworks began.

The speaker had said that another sit-in would not be tolerated, so it appears he decided to allow a vote on their unconstitutional gun bills. Evidently, he didn’t hold the line, though I’m sure he’s confident that any gun control bill would be rejected. Nevertheless, for all the lambasting of his House colleagues over fundraising off the victims of the Orlando attack, which was the impetus for this recent gun control push, and saying that there will not be another sit-in like this one after the Fourth of July recess—he decided to give Democrats a vote. In the eyes of the conservative wing of the GOP, this is capitulation. It’s a retreat. On the other hand, the bills that will be brought forward are probably not to the liking of House Democrats, who (you guessed it) threatened to hold another sit-in until Democratic bills can be considered (via the Hill):

A Democratic source said the more controversial gun-purchase provision may be one backed by the National Rifle Association that Democrats feel doesn’t go far enough. Instead, they want a vote on Democratic legislation that would bar firearm sales to anyone on a terrorism watch list or no-fly list.

Without a vote on their own legislation, Rep. John Lewis (D-Ga.) and other Democrats have threatened to take control of the House floor once again after they return from the Fourth of July recess. On Wednesday, Minority Leader Nancy Pelosi (D-Calif.) and dozens of other Democrats held events around the country demanding action to stop gun violence.

It’s a bit odd that Lewis is pushing this bill since he knows the flawed nature of the terror watch list provision; he was on the list. Lewis isn’t a terrorist, but he would be barred from exercising his Second Amendment rights should this bill become law. How does he not put it together that Americans will have their rights stripped without due process of law, which is unconstitutional? The lack-of self-awareness and hypocrisy in these fights from the Left is nothing short of astounding.