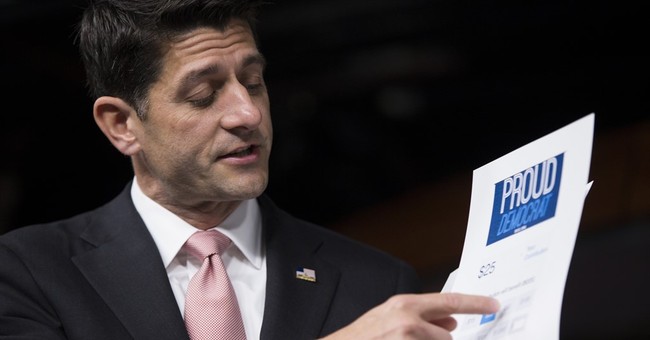 If Democrats want to stage another sit-in on the House floor, it’s not going to be tolerated in the manner prior to the Fourth of July recess. Democrats have been trying to place pressure on congressional Republicans to hold votes on gun control, which are destined to fail along party lines. Democrats say they’re creating havoc to raise awareness on the issue of gun violence, as if this likely terrorist attack wasn’t reason enough to realize that there are bad people out there who will from time to time commit horrific acts. Regardless, House Democrats are vowing to take their gun control message to their already anti-gun districts over the Independence Day recess. Yet, Speaker Ryan has warned them about their antics once the House reconvenes (via The Hill):

The Speaker called Democrats' 24-hour-plus occupation of the House floor last week "a low moment for the people's House," but Democrats who joined the protest have vowed to hold another sit-in next week until Republicans allow a vote on gun control following the June 12 Orlando massacre.

“We are not going to handle it the same way,” Ryan said Sunday on WISN’s “UpFront with Mike Gousha.” "We will not take this. We will not tolerate this."

In a separate radio interview that aired Monday, Ryan said Democrats had hoped to get arrested during last week’s protest. But Republicans, aware that putting civil rights icon Rep. John Lewis (D-Ga.) and other senior Democrats in handcuffs could cause the GOP political damage, decided to avoid a physical altercation and never called on the sergeant at arms to intervene.

“We got maybe an hour heads up. [Democrats] said they were hoping to get arrested and hauled off the floor. They told a number of my staff that,” Ryan told WGTD radio in Wisconsin.

Sen. Chris Murphy (D-CT) was the first to launch this legislative offensive in the Senate by filibustering a spending bill for the Department of Justice. He wanted to vote on two amendments, one that expanded background checks and another that would prevent those on terror watch lists from buying guns. A similar measure was put forward after the San Bernardino attack - it received 45 votes. This rehashed effort only garnered 47 votes. It’s the terror watch list bills that Democrats are choosing to die for in this battle, despite the egregious due process concerns. How bad is the bill? Well, Gawker, of all publications, finds this to be an absolute waste of resources and grassroots energy on a bill that’s truly awful. Gawker noted there are plenty of other issues within the twisted realm of gun control for Democrats to sacrifice themselves on the altar of politics for than this “useless” bill. Also, Rep. John Lewis (D-GA), who spearheaded this charade, was put on the no-fly list. If Democrats had their way, Lewis would have been prevented from exercising his constitutional right to own a firearm, even though he has zero ties to terrorism. The terror watch list has deep, systemic legal problems. Combining that with background checks on firearms that would deprive Americans (who aren't terrorists) of their gun rights without a trial is nothing more than big government run amok.

Oh, and as for the alleged politicking of this issue, like fundraising off of the victims of Orlando, Democrats are pretty much admitting to it. It’s a massive effort to fill their 2016 war chests. It’s money that will be used to try and increase their numbers in Congress to expand government power. Many of you already know this, but we should always be reminded that Democrats aren’t in this for public safety. It’s about power. And if we can get some benefit from parading dead people to achieve that goal—so be it.

Oh, 26 Democrats who participated in the sit-in are gun owners.