No Way: 26 Democrats Who Participated in House Sit-In Are Gun Owners 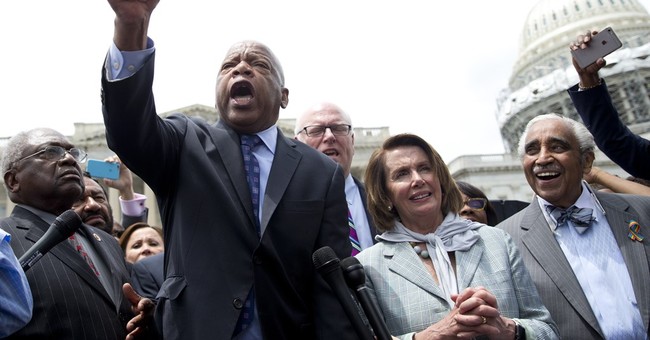 The House is in recess for the Fourth of July holiday, but that doesn’t mean Democrats' push for more gun control  is taking a halftime break after the Orlando attack. In that horrific incident, Omar Mateen shot and killed 49 people at Pulse nightclub in Orlando, Florida, making it the worst mass shooting in American history. It was likely a terrorist attack, as Mateen pledged allegiance to ISIS during the shooting. But he used a Sig Sauer MCX rifle, which looks like the AR-15—the harbinger of pure evil to the anti-gun Left.

So, gun control was back in the spotlight, with Democrats fundraising off the victims in their effort to curb American civil rights. Sen. Chris Murphy (D-CT) fired the first salvo in the Senate, holding up a Department of Justice spending bill so the chamber could vote on gun control amendments. Senate Republicans relented, allowed a vote on increasing background checks and keeping those on terror watch lists from buying guns, and both of them failed along party lines. In the House, 26 Democrats occupied the floor to pressure Speaker Paul Ryan to hold a vote. That failed too. Yet, here’s an interesting fact—all 26 House Democrats who put on that clown show are gun owners (via Heat Street):

The controversial sit-in included 26 Democratic lawmakers who themselves own guns, Heat Street learned after examining 2013 USA Today data on congressional firearms ownership. The participants also included 12 more Democrats in Congress who either didn’t respond to USA Today’s gun survey or declined to say whether or not they possessed a firearm.

The participation of Democratic gun owners can be viewed as the pursuit of reasonable compromise by left-wing firearm fans—or, potentially, as hypocrisy.

Here’s the full list of Democratic gun owners who participated.

Democrats are already planning day of action events in their respective districts to push the issue of gun control. Don’t see how that will move the needle in any direction whatsoever. These Democrats mostly hail from deep blue, anti-gun states. All they’re doing is just increasing the war chests for pro-Second Amendment community, along with increasing awareness to an issue they lose consistently across the sociopolitical spectrum. The courts, the polls, and the people have spoken, but who am I to tell the Left to stop wasting their resources on an awful gun control bill (via the Hill):

Energized by their recent takeover of the House floor, the Democrats are eying a series of tactics and events for members to bring to their home districts through the break, including a "national day of action" designed to remind voters that Republicans have refused to bring the issue on the floor.

In a letter sent to all Democrats on Friday, the organizers behind the sit-in urged their colleagues to "build the momentum" created by the protest, in hopes of forcing the Republicans' hands by dint of public pressure.

"Our sit-in showed that the Republican Leadership can no longer ignore the epidemic of gun violence," the Democrats wrote. "A movement was born and will only continue to grow."

Their suggested day of action: June 29.

Their suggested tactic: almost anything.

Yeah, this is the hill Democrats want to die on in 2016. To pressure the GOP and raise awareness on a new bill that would strip Americans of their gun rights without due process. Those are hallmark characteristics that define these secret government lists, the criteria for which one is added is unknown. Finding out if you’re on it? That’s even harder. How does one remove oneself from any of the terror watch lists? It’s another unknown factor. There’s really no mechanism to challenge the charges lobbed against you, hence why this is such a nightmare of a bill. Rep. John Lewis (D-GA), who was one of the ringleaders in the House sit-in should know all about the due process concerns and the horrific inaccuracy of these lists. After all, Lewis was on one of them. Should he be deprived of his right to bear arms? And therein lies the problem, folks.