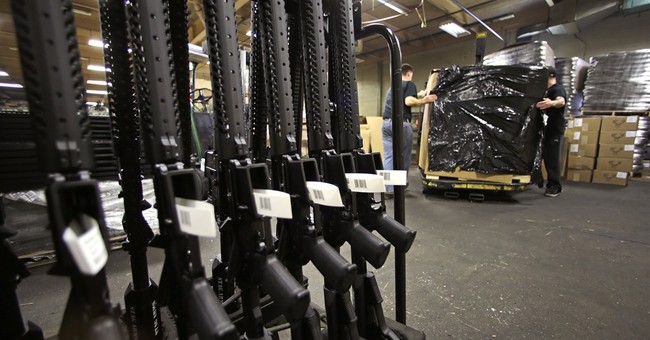 Well, there’s Katie Couric’s selective editing fiasco with members of the Virginia Citizens Defense League in her anti-gun feature Under The Gun. Then, HBO Sports had a little episode of their own when one of the men who designed the AR-15 rifle said the network misrepresented his views. Now, the executive director of the National Firearms Act Trade and Collectors Association isn’t happy that The New York Times made him look like he supported a gun registry (via The Federalist/Sean Davis):

According to Jeff Folloder, the executive director for the National Firearms Act Trade and Collectors Association (NFATCA), New York Times op-ed author Alan Berlow took Folloder’s quotes out of context to give the impression that Folloder agreed with certain gun control measures.

“The primary issue is that Berlow’s selective editing gave the impression that I/we support gun registration,” Folloder told The Federalist via e-mail. “We don’t.”

“Many of my quotes/attributions from that past interview were taken out of context,” Folloder told The Federalist. “I detailed to the author that one of the rumors that we have to constantly dispel is the fiction that registering an NFA weapons gives ATF permission to come inspect or kick in your door without cause or warrant.”

“I specifically said that registering an NFA weapon does not mean that you give up any search and seizure rights,” Folloder continued. “Of course, that morphed into ‘not giving up any rights.'”

“Berlow, through manipulation and editing, implied that I/we think that a gun registration scheme is effective,” Folloder concluded. “It’s not.”

Berlow refers to the author of the op-ed in the Times, who wrote a half-baked piece about how the National Firearms Act, which places heavy restrictions on machine guns, certain short-barreled, and suppressors, including being included in a federal registry, is a good thing—one that fosters responsibility with gun owners who can afford $40,000 for an automatic weapon. Well, for starters, these, and Berlow admits this, aren’t most gun owners. Consider them the Mitt Romney class of gun owners. Yet, this is the passage Folloder took umbrage with in his piece:

Jeff Folloder, the executive director of the N.F.A. Trade and Collectors Association, says his members have learned to live with gun registration and lose no sleep worrying about confiscation. “There are still an enormous number of people who think if they register and purchase an N.F.A. weapon, they’re giving A.T.F. permission to come knock on their door at any time, and that’s just not true,” Mr. Folloder told me. “You’re not giving up any rights.”

Regardless, the whole column was an attempt to say a) the NRA is off base; b) gun registration isn’t scary; and c) even the NRA supported registration and licensing of firearms back in the day:

In the 1930s, when the N.F.A. was debated, the N.R.A. president, Karl Frederick, effectively endorsed registration of all firearms and licensing of gun owners: “I have never believed in the general practice of carrying weapons,” he once said. “I think it should be sharply restricted and only under license.”

The case for licensing and registration is stronger now than ever. Yet to today’s N.R.A. such measures are an existential threat to the Second Amendment. If that is true, why hasn’t the government used the N.F.A. database to confiscate weapons? Why has it failed to move against the holders of hunting licenses and concealed carry permits who readily submit to milder forms of gun licensing and registration?

Eighty years of experience with the N.F.A. have demonstrated that people who register weapons rarely commit crimes. Registration fosters responsibility and its tremendous success forcefully undermines the N.R.A.’s nonsensical claims that reasonable limits on gun ownership are a serious burden to law-abiding gun owners.

Berlow is right that there is strong support for a gun registry, but does that make it right? Of course it doesn’t. We have a constitutional right to own firearms, and the government doesn’t need to know the names of Americans who own guns, and where they keep them, the same way we don’t know who, where, or when Americans decide to exercise their right to free speech or assembly. It’s a right for a reason. The overwhelming majority of gun owners, concealed carry holders, and those who dole out $200 for the NFA tax stamp are law-abiding citizens. There’s absolutely no reason to denigrate, or view with suspicion, those who exercise the right to own a gun. It’s absurd.

Registration doesn’t foster responsibility. It only expands government’s power, and it’s dangerous to suggest that anything government does makes us a more responsible and better people. Government isn’t the great benevolent force that liberals often see within the halls of Capitol Hill. Sometimes it targets conservatives through the IRS. Other times, it places entire communities in the crosshairs of economic destitution through crushing regulations on coal. Government should be viewed with healthy skepticism. It should not be viewed as the point of the lance in offering a solution because it often fumbles the ball. Trusting government with a gun registry is almost as irresponsible as leaving firearms within the hands of children. The chances of a fatal accident occurring increase tremendously. Let’s not make that mistake.

Oh, and as for the Berlow’s piece, maybe he should include an editor’s note that Mr. Follonder doesn’t support a gun registry.