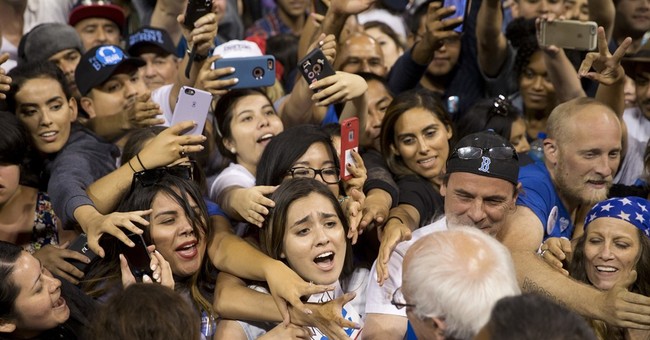 Hillary Clinton has won enough delegates to win the Democratic nomination. This was inevitable, though the campaign of Vermont Sen. Bernie Sanders and his supporters were probably not happy that The Associated Press reported that Mrs. Clinton had virtually clinched the nomination on eve of the June 7 primaries. AP calmly responded to the controversy by pretty much saying hey, “we counted” the delegates; Clinton crossed the 2,383 threshold. Couldn’t agree more with that. Prior to the AP’s re-tally, Clinton was only 23 delegates away from reaching the magic number—and they confirmed with all of her 571 superdelegates that they were indeed going to cast their vote for her. Period.

Still, reporting on the Democratic primary has been a trying time for the female reporters on the trail. Many have noted the vile social media exchanges doled out by some Trump supporters, but Bernie bros seem to be equally repugnant. In the aftermath of the Nevada Democratic Convention in Las Vegas, which was a trainwreck, death threats were directed towards the state party chair.

Now, we have female reporters from National Public Radio, The New York Times, BuzzFeed, and The Daily Beast have found themselves in the crosshairs of some horrific voicemails, emails, and comments that can only be described as racist and misogynistic, as reported by Callum Borchers of The Washington Post [bold text indicates Goff] (warning: some graphic language):

If there is a trophy for bad behavior, Bernie Sanders's supporters appear hellbent on taking it from Donald Trump's.

BuzzFeed's Ruby Cramer says her email inbox was on the receiving end of similar missives Tuesday.

This comes two weeks after Daily Beast columnist and WNYC radio host Keli Goff chronicled some of the racist mail she receives from Sanders backers. Here at The Fix, our own Janell Ross has written about her experience with racist, sexist messages from so-called "Bernie Bros."

They use a variety of curse words and insults typically reserved for women. More than one has suggested that I deserve to become the victim of a sex crime. They critique the "objectivity" of what is clearly political analysis based on polling data and other facts; they insist that black voters are dumb or that I have a personal obligation to help black voters see the error of their Clinton-voting ways. It is vile. And it stands in sharp contrast to the claim that no portion of Sanders supporters are angry people who sometimes engage in or embrace bigotry.

Why doesn't @BernieSanders speak out more forcefully against his supporters attacks on female reporters?https://t.co/24nHeMyrJ1

I won't be answering calls from unknown numbers today, after third call from Bernie supporters telling me they'd hunt me down in the streets

@tamarakeithNPR Have some of those in my inbox as well. What is wrong with people??????

Borchers said that Sanders has tried to tell his supporters not to engage in violence and other aggressive acts, but his criticism of the primary process seems to be the catalyst that sets off the whole nasty affair.

Based on the tweets and comments, it’s absurd to threaten anyone’s life, or call them the C-word, for simply doing their job. As for media bias, yes, it exists—but does that warrant a death threat? No. There are many things to be upset about. For Democrats, I’m sure there will be a lengthy debate about the superdelegate system, though Clinton won the majority of pledged delegates. Bernie bros, your candidate isn’t going to be the nominee. He lost. Get over it, and stop threatening reporters. It’s not like it’s going to stop them from doing their jobs. Get a grip.

Is This Why Kamala Was AWOL When Biden Addressed the Collapse of Afghanistan?
Matt Vespa
Ford's Theatre Takes a Shot at Lincoln's Character
Spencer Brown