ICYMI: The Nevada Democratic Convention Was Sort Of A Trainwreck 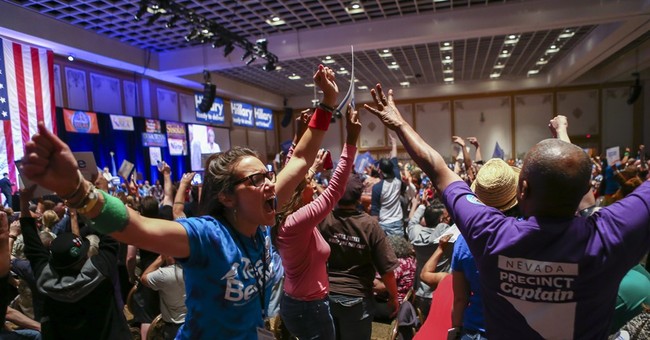 Guy touched upon this in his post about how Democratic Party unity appears to be held by spit and duck tape, but the Nevada Democratic Convention over the weekend was a shambles. Supporters of Sen. Bernie Sanders were absolutely enraged over what they see as an unfair process that narrowly awarded more delegates to Hillary Clinton. Philip Bump at The Washington Post tried to piece together the insanity that unfolded that ended with a torrent of death threats being hurled at the Nevada Democratic Chairwoman, Roberta Lange:

Nevada's process for sending delegates to the national convention in Philadelphia is among the most complex. When the state caucused in late February, the fourth state on the calendar for the Democratic Party, the results of that process favored Hillary Clinton. Twenty-three of the 35 total bound delegates were given out proportionally in the state's four congressional districts, giving Clinton a delegate lead of 13 to 10. The results of the caucus suggested that after the state convention — which bound the state's seven at-large delegates and five delegates who are elected officials or party leaders — Clinton would end up with a 20-to-15 lead over Bernie Sanders, with Clinton winning one more delegate from the at-large pool (4-to-3) and one more from the party-leader pool (3-to-2) than Sanders.

The people who attend the Democratic convention this weekend were chosen during voting in early April. At that point, Sanders out-organized Clinton, getting 2,124 people elected to the state convention (according to the tabulation at the always-essential delegate-tracking site the Green Papers) to Clinton's 1,722. That suggested that voting at the state convention would flip: Sanders would win those 4-to-3 and 3-to-2 contests, giving him a 7-to-5 victory at the convention and making the state total 18-to-17 for Clinton instead of 20-to-15.

Prior to the state convention, some Sanders supporters began an effort to shift the convention rules in a way that they viewed as more favorable to their candidate. One of those changes, the Las Vegas Sun reported, was a process for verifying voice votes; another took issue with the state party chairwoman, Roberta Lange, heading up the convention. Supporters at the event circulated petitions to the same end. The scene was set.

The first report from the credentials committee on Saturday morning indicated that Clinton had a slight edge in delegates. Sanders fans voted against that report, per Jon Ralston, and then demanded a recount — but this was simply a preliminary figure. As in the Iowa caucuses on Feb. 1, the final total delegates went through a process of realignment as the day progressed.

That was when the vote to approve the rules as written — Roberta's Rules versus Robert's Rules, as some Sanders backers dubbed them — was conducted by voice vote. The motion, seconded by a Sanders supporter, passed — which is when the room, in Ralston's phrasing, "erupts." Ensuing speakers, including Sen. Barbara Boxer (a Clinton supporter), were interrupted by a vocal group of Sanders supporters at the front of the room.

All of that tension set the stage for the final votes. The ultimate total reported by KOLO-TV was 1,695 Clinton delegates to 1,662 for Sanders, giving Clinton that one-delegate total in the at-large and party-leader pools. But the drama was far from over. Fifty-six Sanders delegates — enough to swing the majority — were denied delegate status, mostly because they weren't registered as Democrats by the May 1 deadline, according to the state party. (The Sun reports that eight potential Clinton delegates suffered a similar fate.)

Calif Sen Barbara Boxer: If you boo me you're booing Bernie Sanders pic.twitter.com/mAAu6YNugZ

Bump added that the convention refused to reconsider the position of the 56 delegates, as the event had already run over schedule. They adjourned for the day, but Sanders’ legion of die-hard supporters remained. Law enforcement and security from the Paris Las Vegas hotel staff escorted them out. In terms of pledged delegates, Clinton’s lead is now 282. If Sanders had fared better, it would have only been 278. So, it would’ve been a worthless victory, as Clinton’s lead is virtually insurmountable. Nevertheless, Bump states that the issue here isn’t that Sanders lost, or that Clinton won—it’s whether this fiasco will play out on national television when the party has their nominating convention in Philadelphia come July.

Chairwoman Lange has received vicious death threats as a result of the weekend’s shenanigans (via the Hill):

I just wanted to let you know that I think people like you should be hung in a public execution to show this world that we won’t stand for this sort of corruption,” says the caller on one voicemail, who left his phone number.

One caller called Lange a “f------ corrupt bitch” and another called her an “old hag.”

“If you don’t think that that’s coming back to bite you in the ass, you have got another thing coming,” said one woman caller.

The Nevada Democratic Party aired their grievances about their convention to the Democratic National Committee, saying that Sanders supporters have a “penchant for ... actual violence.” Outgoing Sen. Harry Reid (D-NV) hopes that Sanders will publicly denounce the chaos that ensued. The New York Times added that Chairwoman Lange’s grandchild has been threatened in the aftermath:

The vicious response has come as millions of new voters, many of whom felt excluded by establishment politicians, have flocked to the insurgent campaigns of Mr. Sanders and Mr. Trump. Mr. Trump has all but locked up the nomination, but many backers of Mr. Sanders remain enraged as his hopes of being the Democratic candidate dwindle.

Michael Briggs, a spokesman for Mr. Sanders, said the Vermont senator did not condone violence of any kind. However, he said the campaign was still determining whether it would challenge the Nevada results.

This is absolutely disgusting behavior, and one that should concern Democrats come July. If Sander-ites are as fired up over a convention that would have (if successful) given them gains so minimal it should be considered worthless, then it’s a safe bet to think that Bernie will have a rambunctious crowd heading into Philadelphia. Guy already mentioned how there is a schism between environmentalists and labor unions that could torpedo get-out-the-vote efforts, with several of the nation’s biggest construction unions threatening to not participate in the new voter turnout strategy. It seems as if both parties are having problems uniting.