Petitions To Bern Out Debbie Wasserman Schultz Soar Past 200,000 Signatures 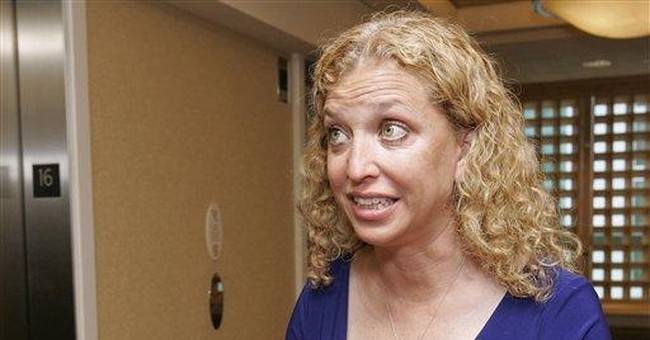 Supporters of Sen. Bernie Sanders have had it. The Nevada Democratic Convention in Las Vegas was a trainwreck, which ended with Sanders supporters, feeling slighted by the convention rules process, causing a ruckus and death threats being thrown at the state’s party chairwoman. The way Democratic National Committee Chairwoman Rep. Debbie Wasserman Schultz has handled the situation has also been criticized. Former Obama official and CNN commentator Van Jones said that he wished Reince Priebus of the Republican National Committee was his chairman, given his neutral tone throughout the GOP’s contentious contest; Schultz has been accused of tilting the race in Clinton’s favor. Now, a handful of petitions have been put forward to oust Schultz as the DNC chair, and it’s received over 200,000 signatures (via The Hill):

The online anger erupted this week after Wasserman Schultz called on Sanders to get his supporters in line after a rowdy Nevada Democratic convention where Sen. Barbara Boxer (D-Calif.) endured a hearty booing. Wasserman Schultz also criticized death threats and obscene messages left on the voicemail of the chairwoman of the Nevada state party.

Sanders was defiant and defended his supporters. While he criticized any violence in Nevada, he blamed much of the trouble on the Democratic Party.

“Unfortunately, the senator’s response was anything but acceptable. It certainly did not condemn his supporters for acting violently or engaging in intimidation tactics and added more fuel to the fire,” she said on CNN.

Liberal groups such as Credo, Moveon.org and RootsAction have posted online petitions calling for Wasserman Schultz to resign from the DNC.

Credo was angered by an interview the DNC chair gave in January to The New York Times in which she accused young women of “complacency” about reproductive rights. The liberal group charged that she has “repeatedly failed to act in the best interests of progressives and the Democratic Party.”

The main worry is that Sanders supporters at the Democratic National Convention will repeat the chaos that ensued in Nevada. Talking Points Memo reported that some have already secured the permits to conduct protests. Given this event and his supporters undying loyalty, there’s no reason to suspect that the self-described Democratic socialist is going to drop out any time soon, even with Hillary Clinton being less than 100 delegates away from clinching the nomination. He’s surely not having any trouble raising cash to keep the Bernie train moving. The Vermont senator outraised Clinton in April, pocketing $26.9 million to Clinton’s $25 million.