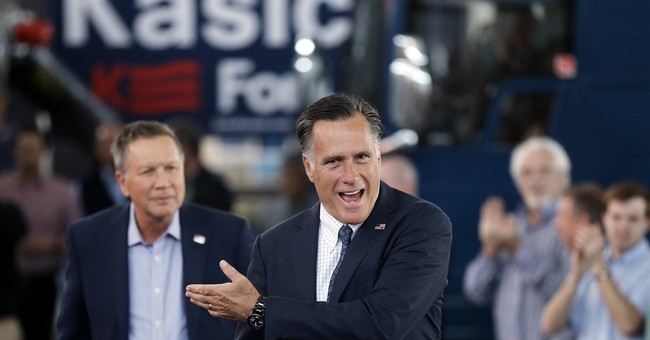 Is there an independent bid coming? The anti-Trump wing of the GOP seems to still be in a state of shock (and panic) over the fact that Donald Trump will be the 2016 Republican nominee. So, a few of the leading figures within this coalition, and that of the broader conservative movement, are still looking at the third party option. Mitt Romney met with The Weekly Standard’s Bill Kristol about a possible independent bid. Sen. Ben Sasse (R-NE) took to social media to voice his disgust over the choices we have for president this year. And then, there’s former Oklahoma Sen. Tom Coburn. According to Mike Allen of Politico, his daily Playbook newsletter yesterday said that there’s a 50-50 chance that either of these men mount an independent bid for the candidacy:

Members of the conservative intelligentsia aching for a Republican to run independent against Trump have concluded that there is "a difficult but viable path" for an independent, based largely on the unusual unpopularity of the two nominees. A well-known conservative told us the final three possibilities are Sen. Ben Sasse, age 44, of Nebraska; Sen. Tom Coburn, 68, of Wyoming; and Mitt Romney, 69.

This conservative told us to expect renewed buzz around this possibility over the next week, and sees "a 50-50 chance that one of the three will do it."

This ship has probably sailed. Besides money, there’s the question about ballot access, which makes this Hail Mary pass somewhat moot. The Washington Post’s Ruth Marcus and The New York Times’ Jonathan Martin mentioned how this is the Mount Everest of political feats, virtually insurmountable, because of those ballot access rules set by the states on March 20 on Face The Nation. Martin said, at the time, that the anti-Trump wing was probably looking to “piggy-back” off of other smaller parties that have access–like Libertarian or Constitution, which makes mounting such a challenge easier. Host John Dickerson asked whether these right-leaning minor parties would agree to be a “host” to the Never Trump crowd, to which Martin replied that’s another issue entirely. USA Today’s Susan Page, who was also featured during that broadcast, noted that this is why the Never Trump crowd never got legs because their strategies didn’t work and more critically they couldn’t find a candidate to rally around.

Ed O’Keefe also of the Post went on CNN yesterday and said that this whole fairy tale about an independent bid probably died when Michael Bloomberg decided not to jump into the 2016 ring. Like Trump, he certainly has the money to finance his entire operation. The problem: he couldn’t win.

Again, the lack of a candidate, money, organization, and ballot access is probably why Republican National Committee Chairman Reince Priebus views this as a “suicide mission.” Frankly, the primary is over. The time spent looking for the anti-Trump guy, or gal, is time wasted devoting our attacks against Hillary Clinton, Bernie Sanders, and the Democratic Party. I may not have liked Ohio Gov. John Kasich, but at least he's not entertaining this far-fetched secondary protocol.

UPDATE: As Justin wrote earlier today, Sasse and Romney are out.