Will Senator Ben Sasse Run as a Third Party Conservative Against Trump and Clinton? 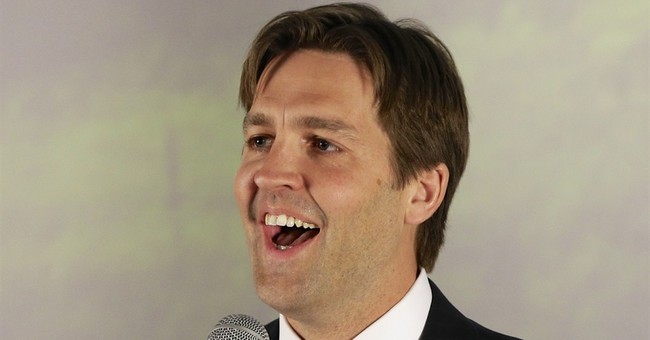 Since Texas Senator Ted Cruz exited the race for the White House Tuesday night, effectively conceding the GOP presidential nomination to Donald Trump, conservatives have been reeling and many pieces have been written about the true end of movement, Reagan conservatism.

The Never Trump movement is standing its ground and Republicans are starting to panic about the consequences for Republicans down ticket with Trump as the nominee.

"How can we vote for a guy who holds none of our principles?" is the question being asked.

Conservatives are looking for options and are even considering the possibility of a third party run.

Enter Nebraska Senator Ben Sasse, who wrote an open letter to "those who think both leading presidential candidates are dishonest and have little chance of leading America forward" after speaking with constituents. He posted the letter on his Facebook page. He argues the country's majority deserves better.

"If you are one of those rare souls who genuinely believe Hillary Clinton and Donald Trump are honorable people – if they are the role models you want for your kids – then this letter is not for you," Sasse wrote. "Instead, this letter is for the majority of Americans who wonder why the nation that put a man on the moon can’t find a healthy leader who can take us forward together."

But we “have to” support him, “because the only choice is Trump or Hillary.”

AN OPEN LETTER
to those disappointed in both of our presidential candidate choices:https://t.co/vbwOi1UGhg

I don’t think the people of my town are wrong: They deserve better choices than Hillary or Trump.

I think there is room for a 3rd party candidate. What am I missing? More importantly, what are the people at Fremont Wal-Mart missing?

I took an oath to the Constitution.
That means I'm for limited government.
There’s no evidence that either Trump or Hillary believe in that

Remember: our Founders didn’t even want entrenched political parties. So why should we accept this terrible choice? https://t.co/0s6ApkRqGO

Why are we confined to these two terrible choices? This is America. If both choices stink, we reject them & go bigger. That’s what we do.

We now have the two most unpopular candidates EVER – Clinton by a little, and Trump by miles. https://t.co/YWl7ySPRiq

In the history of polling, we’ve basically never had a candidate viewed negatively by half of the electorate. This year, we have two.

So, will Sasse be the third party candidate? Time will tell.

(note to reporters: Such a leader should be able to campaign 24/7 for the next 6 mons; thus likely can’t be an engaged parent w/little kids)