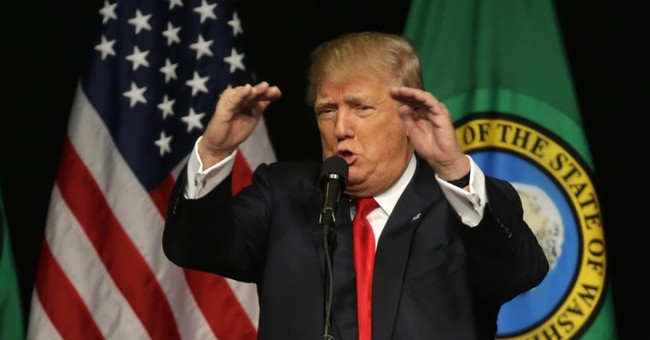 Donald Trump is the Republican nominee. Yes, I know—I’m still eating crow for doubting the billionaire real estate magnate who laid waste to his challengers by tapping into a vein of the electorate that’s been suffering for years: white working class voters. You see it in in various think pieces and blogs across the political spectrum about the collapse of this demographic, who often feel the country, has left them behind. Hanna Rosin, who has contributed to various publications, including the Atlantic, Washington Post, and Slate, even wrote a book called The End Of Men: And The Rise Of Women, which detailed how men have not adapted to the new reality: that the strength of American manufacturing is fleeting, and that plant jobs that were tickets to a middle class life is a rapidly closing window (via CNNMoney):

The plight of these blue collar workers is now in the national spotlight. The 2016 presidential election has awakened their political power and reshaped the course of the campaign.

Their anger -- which has brought millions to the polls, particularly on the Republican side -- has prompted the candidates to focus heavily on manufacturing, trade and other issues of importance to this slice of America. Four years ago, the GOP nominee Mitt Romney dismissed the 47% of Americans who don't pay taxes. Now, frontrunner Donald Trump proclaims that he loves "the poorly educated."

It's tough to make a living in Scioto County these days. Gone are all but one of the shoe manufacturing factories that used to employ thousands. Shuttered are most of the steel mills that supported middle class families. Shrunken are the railroad maintenance yards that once carried coal from Kentucky and paid well.

Some of the Haverhill workers made $35 an hour, a wage "you just don't replace in this area," said Luanne Valentine, who oversees the OhioMeansJobs center in Scioto County, which has about 77,000 residents.

One of the main problems: Many residents don't have the education or training to make it in today's economy. Only 14.4% have a college degree, compared to 25.6% statewide and 29.3% nationally.

A generation ago, Scioto residents didn't need to go to college to earn a decent wage.

"Thirty to 40 years ago, a man had a job at a shoe factory. His wife didn't work. They were able to raise a couple of kids," said Steve Sturgill, executive director of Community Action, which provides workforce and social support services for local residents. "That's not the case today."

A family of four in Scioto County could have a nice, middle class life making $25 an hour, but to earn that much, both parents usually have to work, Sturgill said.

In short, these are the people the media supposedly says are drawn to Trump. I have no doubts that large swaths of these people are pro-Trump; his victories in West Virginia and Indiana, bastions of plant workers and coal miners, are a testament to that. But are they working class? Not really—in fact, many are wealthier than most might suspect. The average household income for a Trump supporter is $72,000 (via FiveThirtyEight):

It’s been extremely common for news accounts to portray Donald Trump’s candidacy as a “working-class” rebellion against Republican elites. There are elements of truth in this perspective: Republican voters, especially Trump supporters, are unhappy about the direction of the economy. Trump voters have lower incomes than supporters of John Kasich or Marco Rubio. And things have gone so badly for the Republican “establishment” that the party may be facing an existential crisis.

The median household income of a Trump voter so far in the primaries is about $72,000, based on estimates derived from exit polls and Census Bureau data. That’s lower than the $91,000 median for Kasich voters. But it’s well above the national median household income of about $56,000. It’s also higher than the median income for Hillary Clinton and Bernie Sanders supporters, which is around $61,000 for both.

Trump voters’ median income exceeded the overall statewide median in all 23 states, sometimes narrowly (as in New Hampshire or Missouri) but sometimes substantially. In Florida, for instance, the median household income for Trump voters was about $70,000, compared with $48,000 for the state as a whole. The differences are usually larger in states with substantial non-white populations, as black and Hispanic voters are overwhelmingly Democratic and tend to have lower incomes. In South Carolina, for example, the median Trump supporter had a household income of $72,000, while the median for Clinton supporters was $39,000.

Many of the differences reflect that Republican voters are wealthier overall than Democratic ones, and also that wealthier Americans are more likely to turn out to vote, especially in the primaries. However, while Republican turnout has considerably increased overall from four years ago, there’s no sign of a particularly heavy turnout among “working-class” or lower-income Republicans. On average in states where exit polls were conducted both this year and in the Republican campaign four years ago, 29 percent of GOP voters have had household incomes below $50,000 this year, compared with 31 percent in 2012.

Only 12 percent of Trump voters have incomes below $30,000; when you also consider that Clinton has more votes than Trump overall, that means about twice as many low-income voters have cast a ballot for Clinton than for Trump so far this year.

Yet, let’s revisit this $72,000 figure for a second. The core of Trump supporters may be dotted with working class voters, but he seems to be attracting the coveted middle class. So, in a way, Trump could be competitive with the very class that Democrats love to present to the masses as the people they’ve sworn to protect from Republicans, Wall Street, and special interests, despite the fact that the latter two are equally invested in Democrats (if not more so) than the GOP.

So, Trump could be duking it out with Clinton for the title of “middle/working class hero.” We all know that coal miners probably don’t like Clinton much. The Rust Belt states hate the North American Free Trade Agreement, which was signed under President Bill Clinton, though the criticism that it was a job killer is overblown. Nevertheless, the perception with these voters On NAFTA is the opposite—and that’s not changing. Hillary was for the agreement, before she decided to pivot against it. She’s also flip-flopped on the Trans-Pacific Partnership, also opposed by most in the Democratic Party, including labor unions.

Former Obama green jobs czar, and unabashed lefty, Van Jones said that the Rust Belt could be prime territory for Trump, as its states are remaining in the blue wall “by a thread.” If Trump is able to expand and win Michigan, Ohio, Florida, and Pennsylvania—he’s president. Right now, leaving out Michigan, Trump is running neck-and-neck with Hillary in those key swing states.

Anything can happen from here on out. Trump has proven to be adept at mastering the media. He’s had them around his fingers since his campaign began, garnering his $2 billion in free media. Hillary either heads into the bunker, or ignores them outright, which could be a fatal mistake. Trump’s fans are die-hards, never abandoning him for his outrageous behavior. He’s also unapologetic and will be visible to the masses and the news media. In a time where 2016 campaign trail stories are key, even ones that are totally comprised of anonymous sources, Trump will always have a rally, or an event, within reach that will offer him an outlet to slam Clinton repeatedly.

Jones and former Democratic strategist (and Clinton adviser) Paul Begala know there’s a highway that Trump can take to claim victory come November—and it centers on the Rust Belt. The longer Democrats stay divided, the more time he has to soften up his opposition. This whole cycle has been unpredictable. So far, the media stories that would end most campaigns have bounced off him like Old’ Ironsides. He’s truly the Teflon Don.

So, while Trump’s core support might be more grounded in middle class voters, it’s still not a detriment to him. In fact, it could be a plus. The middle class and the rural voters are sick and tired. They’re the first vestiges of this nameless, and faceless, wave of American populism, which Salena Zito of the Pittsburgh Tribune-Review has written about for the past few years. Again, with this volatile political season, Trump, as she puts it, could be the beginning of a new era of populism, or a horrific right-of-center version of identity politics:

Trump's non-ideological message appeals to them because they feel the hard right and hard left have given them nothing for their support over the years.

In 2006, they grew weary of George W. Bush's ineptness in Iraq and congressional Republicans' overspending, and they threw out the GOP's majorities; they voted for Obama in 2008 in historic numbers because they saw John McCain as an extension of Bush.

Two years later they were appalled by the overreach of Democrats holding the White House and Congress and threw them out; they threw out some more in 2014. To people here, Trump isn't just some billionaire; he's someone who's been in their living rooms every week for more than a decade. His promise of American renewal and anti-establishment populism resonates despite his success, not because of it.

The voters who brought us our first real populist election since 1896 are the same people that big media likes to dismiss as less educated, less affluent, less likely to vote than their urban cousins — yet, for the first time in generations, they've captured the spotlight and left cosmopolitan America aghast.

Is Trump the end of populism in American politics? Will he and his movement be repudiated in November?

Or, win or lose, is Trump just the beginning of a new, anti-elite politics that threatens to wreck the foundations of both political parties?

Of course, it might just devolve into some white-working-class brand of identity politics, another challenger for “inclusion,” another one of the many “victim” groups that have arisen in the Age of Obama.

This could be a very interesting ride.