Van Jones: Yes, Trump Can Be Elected President–And Progressives Have Dumb Reasons For Why He Can’t Be 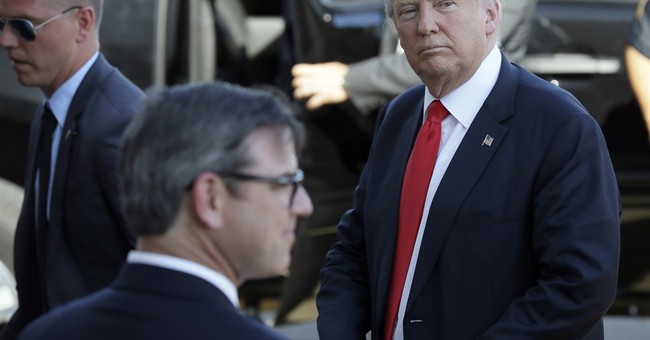 On Tuesday night, CNN’s Van Jones and Democratic strategist Paul Begala were a bit worried about Donald Trump. Maybe they’re weren’t panicking, but they were dispelling the notion that Trump cannot win a general election. Van Jones noted that while 70 percent of black voters don’t like Trump, 30 percent do—and if he can win half of that on Election Day, Trump’s is the next president of the United States. Begala noted that Trump’s core constituency is voters with no college degrees. In the Reagan era, that figure was around 60-65 percent of the country; he admitted if this were a 1980s election, Trump would win in a landslide. That number has been cut in half (which is a good thing) but centered his analysis on the states where 33 percent or so of the electorate aren’t college educated. Location: they all live in the Rust Belt. In a video made by Moveon.org, a progressive organization, Jones listed three stupid arguments his side was touting regarding Trump becoming president.

He mentioned his previous point about black voters, and how Clinton is underperforming with them. He also said how the Rust Belt portion of the so-called Blue Wall is one stone throw away from crumbling—he used the phrase “hanging by a thread.” He mentioned how these voters hate NAFTA. Trump has been hammering the free trade agreement, Hillary has flip-flopped on the subject.

As for policy, well, voters have not really been tuning into to such specifics (not saying that’s a good thing), but it does partially explain why Trump has steamrolled his opponents. Jones also noted that Trump knows how to work the media, whereas Clinton fails miserably. Is this an uphill climb? Absolutely. But there’s a path for Trump to reach 270.

Yes, I know, it’s Van Jones, he was Obama's green jobs czar who called the GOP "a**holes"—but a broken clock is also right twice a day. Trump is polling at a dead heat with Clinton in three swing states, Florida, Pennsylvania, and Ohio. Again, we see the smugness of American liberalism becoming their worst enemy in this situation. They hate the working class because they suck at outreach and cannot empathizing with them over a host of issues. In turn, the working class cannot stand liberals who they feel are talked down to by them—and made to feel like their whole existence is what’s wrong with the country. As a result, they’re flocking to the GOP and Trump.

Yet, more importantly, I remember these same liberals are the ones who called Bush dumb, inarticulate, and full of bad policies in which there was no way he could get elected president—they were wrong. Twice.