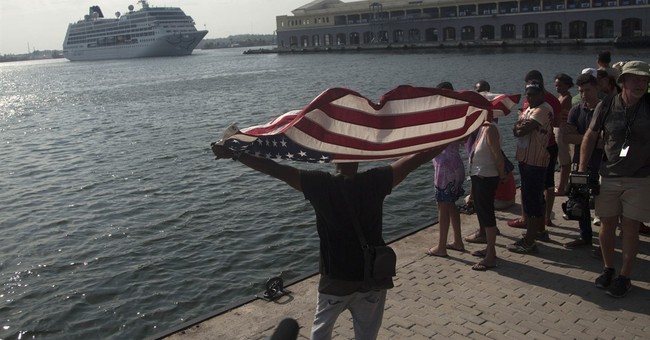 President Obama had a historic visit to Cuba in March, and an American cruise ship has just entered Havana, Cuba—but it has yet to yielded any freedom dividends for the Cuban people. As the cruise ship entered Havana harbor, a lone dissident waved the American flag, which prompted his arrest (via Fox News Latino):

A Cuban dissident was arrested on Monday for waving the American flag near the Havana pier where the Carnival cruise ship Adonia docked on Monday.

The man, Daniel Llorente, was holding the flag across his back at the waterfront as the ship approached. He was detained after making a speech about liberty on the communist island. It’s unclear what charges were leveled against him.

A video of the event shows a crowd of tourists and locals gathering around Llorente, and him getting into a verbal exchange with an unnamed woman. The arrest was first reported by Noticias Martí, a Miami-based news organization focused on Cuba.

“You’re making a clown of yourself,” the woman told him. “The American flag. What are you doing, for God’s sake?”

“What are you doing here? Hypocrite,” Llorente said. “This is a symbol of American pride.”

Prior to Obama’s arrival to the island nation in March, dozens of dissidents were arrested hours before Air Force One touched down. It also coincided with a horrific terrorist attack in Brussels, in which the president decided to stay, watch a baseball game, and do the wave with Raul Castro. Sen. Marco Rubio (R-FL) called the trip a “disgrace,” which could also be applied to Mr. Llorente’s arrest.