Venezuelan Socialism: Two-Day Workweeks, No Supplies, And A Government So Broke It Can’t Pay For Its Own Currency 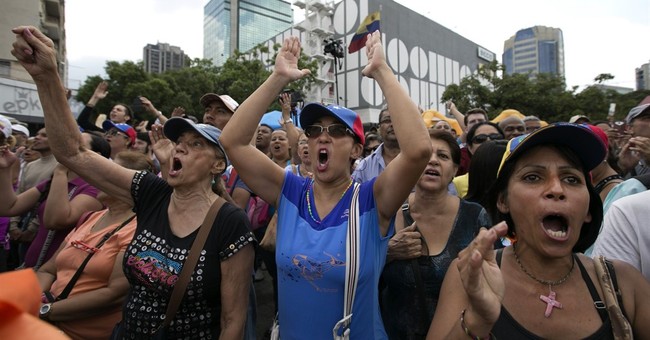 The economic disaster caused by Venezuela’s 21st Century Socialism continues to reap havoc on the nation’s socioeconomic fabric. We have rolling blackouts due to energy shortages. There’s a lack of access to television, long distance phone service, and toilet paper. And with the government failing to provide, the people have resorted to looting. Now, the government has shortened its workweek to just two days (via Opportunity Lives):

Venezuela is coming apart at the seams. Crime is rampant, jobs are scarce, poverty is alarmingly high and looting is prevalent in big cities and rural towns. Venezuelans spend hours every day waiting in line at their local grocery stores and supermarkets hoping to purchase whatever rations may be available. And now there are reports that with energy and electricity in such short supply, the socialist government is cutting the workweek to two days

With misery rising, Maduro is running out of excuses. For months he has blamed Venezuela’s severe food shortages on a “conspiracy” by the United States. It’s gotten so outlandish that the Venezuelan government recently claimed that Vice President Joe Biden is plotting Maduro’s assassination.

What’s strange is that just as Venezuelans are in most need, the government is reducing its availability to deliver basic public services by shortening its workweek.

Not surprisingly, the people are taking to the streets and demanding change. Discontent is no longer confined to the middle class. Now even Venezuela’s poorest, once the most faithful devotees to the promises of socialism under Chavez, are calling out for help and pleading for a lifeline.

In terms of finances, the country is in such dire straits that they may run out of money “to pay for its money” (via Bloomberg):

Venezuela’s epic shortages are nothing new at this point. No diapers or car parts or aspirin -- it’s all been well documented. But now the country is at risk of running out of money itself.

In a tale that highlights the chaos of unbridled inflation, Venezuela is scrambling to print new bills fast enough to keep up with the torrid pace of price increases. Most of the cash, like nearly everything else in the oil-exporting country, is imported. And with hard currency reserves sinking to critically low levels, the central bank is doling out payments so slowly to foreign providers that they are foregoing further business.

Venezuela, in other words, is now so broke that it may not have enough money to pay for its money.

The currency crisis sheds light on the magnitude of the country’s financial woes and its limited ability to remedy them as oil -- the mainstay of its economy -- continues to flatline. Venezuela’s inflation, the world’s highest, is expected to rise this year to close to 500 percent, according to the International Monetary Fund.