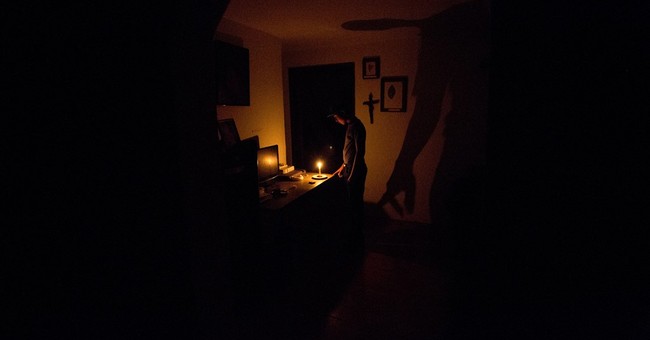 In a previous post, I wrote about how 21st century socialism in Venezuela, spurred by the late Hugo Chavez to help the poor has turned into an utter nightmare. This happens to a nation that spends insanely on socialist programs, where revenue is entirely dependent on the price of oil. In June of 2008, the price of oil was over $150 a barrel–it’s now at roughly $43 a barrel today. That’s billions in budgets shortfalls, which is why the country is experiencing a lack of television access–because the government owes telecommunications companies around $700 million–toilet paper, and the ability to make long distance phone calls. Since January, the country has been teetering on economic collapse. Now, Venezuela braces for 40 days of rolling blackouts (via CNN):

Government officials announced Thursday [April 21] that they would begin rolling blackouts for 40 days in cities across Venezuela, starting next week. The move will help save power at a time when water levels at the country's main electric dam are at record lows.

The government says the El Nino weather pattern and drought are to blame. Outside experts say mismanagement and a corrupt government have been the root cause.

"The blackouts are just more evidence of an utterly dysfunctional government," says Michael Shifter, president of the Inter-American Dialogue, a Washington research group. "This is a government that is not governing."

It's quite an irony for Venezuelans to be facing blackouts. Venezuela has the largest proven oil reserves in the world. However, it uses its oil to export to other countries, not to keep the lights on at home.

Officials are already forcing Venezuelans to cut back on energy. They're feeling the pinch. Glenda Bolivar lives in Caracas, the country's capital, and she stopped blow drying her hair at her local salon.

"Pretty soon we will only be able to use candles like the old times," says Bolivar.

The blackouts aren't new. President Nicolas Maduro was deeply embarrassed in March when power cut out during a speech broadcast on national television.

Venezuela's economy shrank 5.7% last year and it's expected to contract another 8% this year. Inflation has skyrocketed in Venezuela and it could increase nearly 500% in 2016, according to the IMF's projections. The country's economy depends on exporting oil. With oil prices still low, the country has been running out of cash reserves to keep the country afloat.