It's Come To This: NPR 'When Is It OK To Profit From Cooking Other Cultures' Food?' 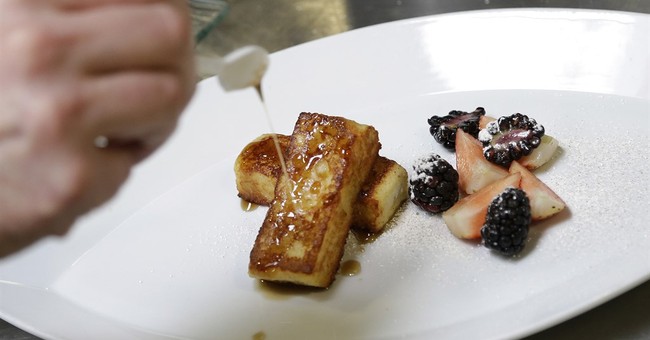 Progressivism’s stupidity has no boundaries. We all know that, but when we have to debate whether we have to segregate food because…culture, you know that we’ve entered a state of decay. Yes, only white people can cook “white food,” Asians can only cook their cuisine, and blacks are master chefs in their realm. National Public Radio weighed in on this neo-apartheid regarding food asking last week “when is it OK to profit from cooking other cultures’ food?” Folks, even by cooking other cultures’ food, and dare I say try to make a living off of it, could be cultural appropriation and a triggering of epic proportions. Or, if you’re an adult, it could be an area where you can enjoy a culture’s cuisine, learn more about it if it was mind-blowing, and really not give a flying you know what about who cooks it. Seriously, are progressives going to enter, say, a Thai restaurant and have anxiety attacks over the ethnicity of the chef? Apparently, that's a legitimate question in this LSD-laced nightmare (via NPR):

Recently, we started a conversation about food and race. Specifically, we wondered out loud, who gets to cook — and become the face of — a culture's cuisine?

Our question was prompted by a recent Sporkful interview with Rick Bayless, who has faced criticism over his long career. Although he is an Oklahoman with no Mexican ancestry, he has become one of the most prominent ambassadors for Mexican cuisine in America....

As with many things involving race and class in America, there are no easy answers — and we're not expecting to find any clear-cut ones. We're more interested in starting a conversation.

Newsbusters’ Tim Graham wrote that Bayless fed the First Couple Mexican food while in Chicago. Are they traitors to the cause? Probably not, but he did warn that Bayless could get some protesters coming his way:

This is mildly amusing, since Bayless loves feeding the Obamas some Mexican food in Chicago. Some thought it was fine, it's a free country, and some did not, so Bayless might want to watch out for protesters: <> “when white people do this, they're inspired. when others do this, they're knockoffs. that's the reality”

“And is it OK that people perceive the food the white chef adopted as worth more than they would pay for the original?”

Students at Oberlin College have similar gripes about their cafeteria food.

Yet, I’m going to trust the American public. I think the vast majority of people who aren’t miserable and self-righteous are perfectly fine with Bayless serving up awesome Mexican food. As a Korean American, I couldn’t care less if the ambassador of Korean cuisine to America is a white, black, or Hispanic. It’s good food, and it originated in the region of my birth. Other folks just cook it. Those recipes are centuries old. I just don’t see where a conniption fit is warranted. And I’m pretty sure other people, of all races, feel the same. Just relax, shut the hell up, and enjoy the Kimchi … you sad, sad* people.

*Yes, looking at you, liberals.