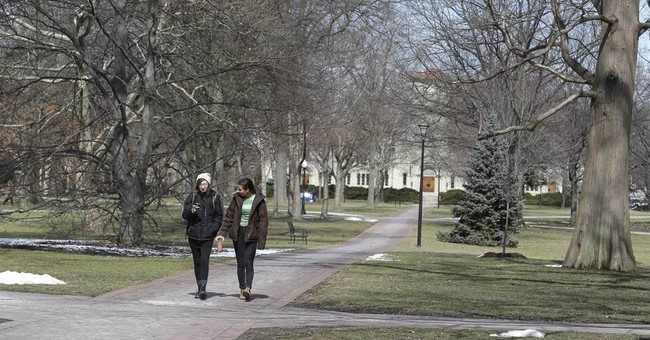 The political correctness wars on our college campuses have entered the cafeteria. That’s right. Food could become the next issue, as college administrators have found themselves under siege by privileged, left wing college students bellowing about racial insensitivity or other fake paradigms of oppression.

Robby Soave, an editor at Reason and columnist for the Daily Beast, wrote about how cultural appropriation has entered the Oberlin cafeteria, where some students are alleging that the kitchen staff is engaging in microaggressions of epic proportions because they can’t prepare an ethnic dish properly. Soave takes this claim to the woodshed:

… [H]ere’s what one Oberlin student had to say about the dining hall’s sushi bar:

“When you’re cooking a country’s dish for other people, including ones who have never tried the original dish before, you’re also representing the meaning of the dish as well as its culture,” student Tomoyo Joshi told The Oberlin Review. “So if people not from that heritage take food, modify it and serve it as ‘authentic,’ it is appropriative.”

Cultural appropriation, readers will recall, allegedly occurs when people borrow the traditions of another ethnic or religious group. Liberal students at a Canadian university, for example, recently shut down a free yoga class for disabled students because yoga has its origins in Hinduism, meaning it doesn’t belong to white people and they shouldn’t practice it. This kind of thinking is actually bafflingly illiberal—who’s to say that culture itself belongs to anyone?—and yet it’s usually left-leaning students waging weirdly nativist campaigns of forced isolation on foreign cuisines and customs.

The culinary critics at Oberlin, however, aren’t just mad that the cafeteria has appropriated their culture—they’re mad that it’s been appropriated poorly.

“It was ridiculous,” student Diep Nguyen told The Oberlin Review (the “it,” in question was a Banh Mi sandwich with the wrong bun). “How could they just throw out something completely different and label it as another country’s traditional food?”

For one thing, the Banh Mi sandwich is itself the product of the blurring of cultural boundaries: French and Vietnamese.

For another, there’s something deliciously ironic about Oberlin students—some of the most privileged people in the world, as evidenced by the $50,000 they pay annually in tuition—whining about the bun-thickness of meals prepared by lowly paid cafeteria workers. As academic and writer Fredrik de Boer noted on Twitter, “When you’re defending the cultural authenticity of GENERAL TSO’S CHICKEN, you’re a living Portlandia sketch.”

Your blood pressure is going through the roof over buns? First of all, as Soave noted, this is a college cafeteria, not Dorsia. They’re not serving up sea urchin ceviche, nor are they serving anything that takes an exorbitant amount of time. Why? They have over 3,000 kids to feed three times a day. The kitchen staff needs to make something good and fast.

At my alma mater, Dickinson College, there was a wok station that I avoided because it wasn’t very good. I never for a second thought the school’s kitchen staff, or administration, was telling Asian students to go screw themselves. No one ever complained about cultural appropriation in the cafeteria. We had other things to worry about, like assignments for class, writing papers, and studying for exams.

College campuses have always been bastions of liberalism. This isn’t a new phenomena, but the direction in which advocacy is facilitated by the left in these arenas has become indiscriminately insane. Food is the new front in the PC wars. Is this a serious narrative? Luckily, Young America’s Foundation released a poll that offers a glimmer of hope, where half of the students polled prefer a smaller government, seven-in-ten reject Black Lives Matter, and a majority aren’t that thrilled with the whole microaggression culture.