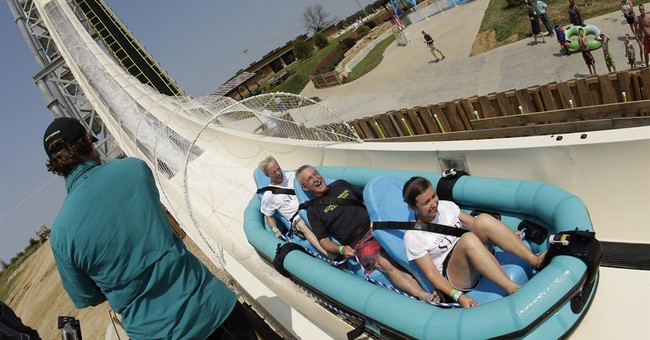 Last week, another event occurred at the hands of migrant Muslim men; they assaulted two teenage girls at a local waterpark. As a result, the waterpark is now segregated to ensure safety, where men and boys can’t use the slides at certain parts of the day. The attackers were two asylum seekers from Afghanistan (via Yahoo!):

Bosses at a German waterpark are to segregate men and women following two horrific sex attacks.

Men and teenage boys will be banned from using the waterslides at certain times when only women, girls and very young boys will be allowed access.

It follows the confirmation earlier this week that police had arrested two asylum seekers from Afghanistan for a sex attack on two girls on the slides at the Arriba waterpark and swimming pool in Norderstedt, in northern Germany.

The girls aged 14 and 18 had been using the waterslides but their attackers, both from Afghanistan and aged 14 and 34, had been waiting for them at the bottom and had then sexually assaulted them.

Katie wrote about the gang rapes that occurred throughout the German city of Cologne on New Year's Eve. Prior to the religious observance of Lent, some distributed pamphlets to the recent refugees in the country, where public urination and sexual assault were mentioned as activities that are not only illegal, but also not welcomed in Germany. In Norway, officials have been handing out reading materials to Muslim men seeking asylum telling them that rape isn’t acceptable*.

That should raise some red flags.