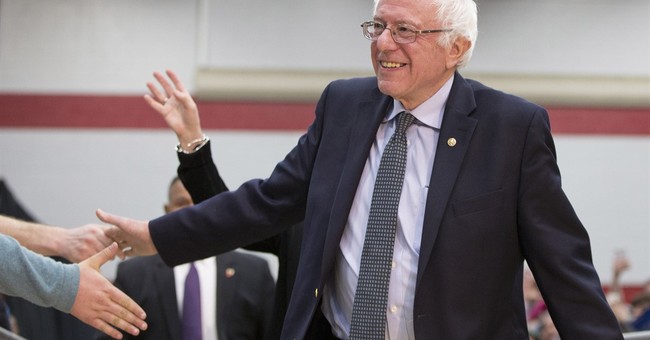 Sen. Bernie Sanders (D-VT) may be trying to foment a political revolution by usurping what he sees as a corrupt campaign finance system, but the Washington Free Beacon pointed out that the darling of the Democratic Party’s left wing has accepted illegal campaign contributions that number in the thousands, some of which are coming  from non-U.S. citizens:

The Federal Election Commission sent a letter to the Democratic presidential candidate’s campaign committee on Thursday with a 90-page spreadsheet listing 3,457 “excessive, prohibited, and impermissible contributions.”

The FEC sent a letter to the Sanders campaign earlier this month flagging an additional 1,316 “excessive, prohibited, and impermissible contributions” in the fourth quarter of 2015.

Some of the campaign’s legal problems stem from enthusiasm for Sanders’ candidacy from foreign nationals, many of whom have publicly revealed donations to the campaign in violation of U.S. election laws.

“I am German, live in Germany and just donated to Bernie Sanders’ campaign on www.BernieSanders.com simply using my credit card—Is this illegal in any way?” asked a user on the website Quora.

The Beacon noted that the German user’s donation was rejected, but this development surely leaves a stain on the Democratic socialist’s massive campaign haul this month; Sanders raised $42 million in February–the most of any 2016 candidate in a single month. Given the nature of the Sanders campaign, it's possible that this was just a misunderstanding that went unnoticed for...quite a bit of time. No doubt the fundraising team is probably getting a thumping from the candidate himself over this oversight mishap, given his penchant for being a "table-banger" when something goes wrong, or when he sees something he doesn't like–this would rank high on that list.