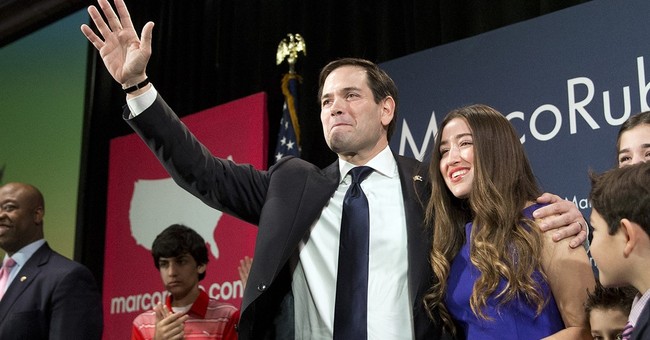 After Donald Trump’s resounding win in South Carolina, along with Bush’s exit, it’s truly a three-man race between Trump, Cruz and Rubio. Bush’s exit surely helps Sen. Marco Rubio (R-FL); the millions that were spent to weaken him by Bush’s Right to Rise PAC will fall silent–but Ohio Gov. John Kasich and Dr. Ben Carson are going to remain in the race. As Guy noted in his analysis, the time for the anti-Trump vote to coalesce around one candidate is rapidly closing:

With Ben Carson and John Kasich sticking around for now, time is beginning to run short in the quest for a 'not-Trump' unifying alternative candidate to emerge. Rubio and Cruz are both working hard to claim that mantle, but if they both continue to battle each other in that pursuit, they could end up guaranteeing a Trump victory. Something's got to give, and soon. If Trump beats Cruz in Texas and Rubio in Florida (both are very real possibilities), it very well could be curtains for both of the young conservative Senators.

Yet, let’s not get all doom and gloom just yet (though a defeat in Florida could be the death knell). There is precedent for nominees losing key early voting contests who still ended up winning the nomination, and there are still plenty of opportunities for Rubio to win a swath of delegates and reassure the GOP establishment that he’s worth supporting. The hitch is the Kasich factor. The Ohio governor need to go and Rubio needs to start winning by March 15. Just before Christmas Nate Cohn mentioned that Rubio could tread water and still possibly win the nomination. Yes, a lot has changed, but he still notes that there’s plenty of room for Rubio to grow even if Cruz nabs Iowa and Trump clinches New Hampshire, which he wrote as hypotheticals at the time.

Moreover, Cohn noted the danger of Rubio’s position in New Hampshire (at the time), where he was leading Bush, Christie, and Kasich. Kasich went on to place second and Bush fourth (barely). Rubio placed a disappointing fifth, but Christie and Bush are no longer factors, edging closer to what Cohn described as a “natural candidate” for those who don’t want Trump to win and trash the party brand. At the same time, Trump has muddied the waters given that he has broad voter appeal concerning age, education levels, and income brackets. He clinched the evangelical vote in South Carolina, whereas Cruz has some serious thinking to do for his future as the GOP primary becomes less evangelical voter-centric after Super Tuesday:

Mr. Rubio would need to hang on until more favorable states on March 8 and particularly March 15, because he probably won’t be doing much winning before then.

The Republican primary calendar is front-loaded with relatively conservative and Southern states, which makes it very hard for a candidate in Mr. Rubio’s position to finesse an early win.

There’s precedent for a candidate to wait it out until a more favorable stage of the calendar, and that candidate also happens to be someone who didn’t win Iowa or New Hampshire: Bill Clinton. He won just three of the first 14 contests before Super Tuesday in 1992, when the South voted for a favored son by a tremendous margin.

To manage something similar, Mr. Rubio would need to do well in relatively favorable states like Nevada, Massachusetts, Colorado, Vermont and Virginia. He would need to do well enough to stay competitive in the hard delegate math, preventing either Mr. Trump or Mr. Cruz from amassing a clear majority of delegates.

If he were to win Florida and either Illinois or Ohio (or both), he would enter the second half of the primary season in a reasonable position. He wouldn’t be assured of victory (or even a majority of delegates), but the mainstream of the Republican Party would probably see he was worth the investment.

So, in many areas, Rubio is working toward more favorable conditions (like Bush dropping out), but let’s be wet blankets for a second. Reiterating Guy’s point, if Trump beats Rubio in Florida (and takes all 99 delegates), let’s channel the billionaire magnate for a second: it could be a total disaster. On the Kasich front, he needs to make the exit for Rubio to increase his odds, but in some ways–he needs to hope that Mr. Kasich stays in the race until the Ohio primary. Over the weekend, The Hill’s A.B. Stoddard noted that Kasich running in Ohio prevents Trump from sweeping the state.

New York Magazine’s Jonathan Chait also directed the South Carolina question tossed at Cruz to Rubio. We all know that Cruz is losing right now, given that he failed to clinch a state that seemed like fertile ground to launch Cruzmania with evangelical and conservative voters. It didn’t happen. But if Rubio can’t win South Carolina, where else is favorable?

On a positive note, Rubio still did well in South Carolina, surpassing 20 percent of the vote. With many southern primary states having 20 percent thresholds on March 1 he's poised to pick up some delegates, and hopefully start gaining some more momentum as we approach Florida:

Mr. Bush’s exit would be enough to make tonight a win for Mr. Rubio, but Mr. Rubio’s share of the vote is impressive as well. Most important, he cleared 20 percent of the vote — a crucial delegate threshold for many Southern states on Super Tuesday (although not South Carolina tonight). If he can’t exceed that number in states like Alabama, Texas, Georgia and Tennessee, he will receive no delegates in those states. It’s a good sign that he’s near or above this number even after the disadvantage of a divided field and after a weak showing in New Hampshire.

Nevertheless, Cohn added that frugality should enter the Rubio camp; they’ll pick up delegates on March 1, but should concentrate on states he could possibly win outright after Super Tuesday to increase his chances of winning the nomination. He noted that Rubio could lose 70 delegates from the South, but make up for it with an Illinois, Ohio, or Florida win on March 15 when the contest becomes winner-take-all. Still, the Trump factor looms dangerously near, and it’s dubious if Rubio can do well enough to break away from the rest of the field, surpass Trump, and clinch the 2016 nomination a la Romney in 2012:

Assuming that Mr. Rubio, Mr. Cruz and Mr. Trump’s support roughly followed the demographic pattern from New Hampshire and Iowa, Mr. Rubio could win an outright majority of delegates if he won around 24 percent of the vote on Super Tuesday and then did as well as Mitt Romney in 2012 for the rest of the primary season.

The fact that Mr. Rubio has failed to do as well as Mr. Romney so far is reason to question whether he would be expected to do it later.

There are a lot of questions, and we won't see many answers until the voting concludes. There’s a way for Rubio to win this contest through exits from other candidates–and Rubio himself needing to win key winner-take-all states that could break for Trump. It’s a narrow road, but if he manages to pull this off, it would surely be another chapter in this frenetic and unpredictable election cycle. Another scenario is that we head for a brokered convention, which becomes more of a possibility if Kasich wins Ohio. There are also close to 100 unpledged delegates from North Dakota, Wyoming, and Colorado who will remain that way for the time being, as these states decided not hold caucuses this year.

In the meantime, Rubio and Cruz are destined to go at it. Let the blood sports begin.