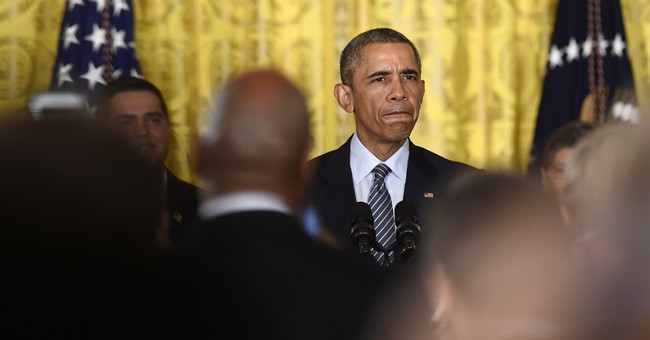 As we enter the New Year (and the 2016 election cycle), it’s probably no shock to some that 2015 was a record year in government regulations. The Competitive Enterprise Institute, a libertarian think tank, compiled all the new rules and proposed regulations. The page numbers soared into the tens of thousands (via The Hill):

In a blog post on the libertarian think tank’s website, the group's vice president for policy, Clyde Wayne Crews, said there have been 3,378 final rules and regulations among the pages of the Federal Register this year. Some of the major final rules included the Environmental Protection Agency’s Clean Power Plan and its Waters of the Unites States rule, as well as the Federal Communications Commission’s net neutrality order.

He said another 2,334 proposed rules were issued in 2015 and are at various stages of consideration. On top of that, President Obama issued 29 executive orders and 31 executive memorandums, among them were agency directives to expand paid family and medical leave and overtime pay.

The Clean Power Plan is by far one of the biggest job killing programs out there. It’s estimated that millions of jobs from black and Hispanic communities could be placed on the chopping block when it’s fully implemented. The policy aims to curb greenhouse gas emissions by at least 30 percent from 2005 levels by 2030. It mostly targets rural America and states that voted Republican in the last presidential election.

States can draft their own carbon emission curbing plans; in fact, they’re encouraged to do so. That’s how this administration spins this as a decentralized effort to address the issue of global warming. The truth is, if states refuse to comply, a federal blueprint will be implemented until the respective state legislature can draft a replacement plan. Of course, coal producing states, like West Virginia and Kentucky, will be severely impacted by this law. Electrical prices in West Virginia could spike 20 percent, and it would surely torpedo the home budgets for fixed-income seniors.

In fact, this policy is so bad that Democrats are starting to join the fight against it. In November, a group called CoalBlue Project aimed to bring Democrats together to find alternatives to the current environmental and energy policies being pushed by the party. On their website, they have a letter to President Obama expressing concern over the Environmental Protection Agency’s overreach in this matter:

As Democrats committed to a prosperous America and a healthy environment, we believe the United States has a unique opportunity to lead the world in addressing the global climate challenge, and yet do so, as we must, without unduly burdening the American economy or the American people.

Disconcertingly, the current direction of U.S. policy – underscored by recent decisions of the U.S. Environmental Protection Agency (EPA) regarding new and existing electric power plants – falls short of these critical benchmarks and, in our view, requires serious reevaluation and adjustment. In sharing these concerns with you, Mr. President, please know that we do so not on behalf of any industry or special interest, but on behalf of the American people we represent in elective office and as leaders within the Democratic Party.

Unfortunately, the EPA’s recently published rules for new and existing electric generating units severely miss the mark in many important regards. Taken together, they endanger the continued development of critical carbon-mitigating technologies necessary to achieve sustainability, threaten the reliability of the U.S. power grid, and place significant economic burdens on the American economy and the American people, in the form of higher energy costs and a potentially less reliable electric grid, without achieving any meaningful reductions in global CO2 emissions.

As for the EPA’s rule for existing power plants, there is great concern that it will place tremendous economic burdens on the American economy, American families, and American businesses, without any direct material impact on global CO2 emissions. Absent other nations following our lead, the EPA’s existing-unit rule will do nothing to stem the growth of global CO2 emissions. Leadership requires that others follow, and while we not only support, but call for U.S. leadership in addressing the global climate challenge, policies that increase the cost of electricity and reduce the reliability of the grid – as the EPA’s proposal for existing units would do – will not lead other nations to follow, particularly not those in the developing world.

More than 600 Democrats have signed the letter; over 400 did so in 2013 as well. In October, Debbie Wing, director of media relations for National Rural Electric Cooperative Association, said on the eve of the plan’s unveiling that:

The EPA’s overreach will have a severe and adverse impact on millions of Americans and businesses across the country through higher electricity bills that will drag down the economy. The forced shut down of co-op power plants before their financial obligations are met means co-op member-owners will be paying twice for their electricity: once for the shuttered plant and again for power from somewhere else.

Even some new publications have noted that President Obama’s Clean Power Plan is “unlawful overreach.” Moreover, the EPA hasn’t been necessarily a mecca for job creation. The agency’s ozone regulations alone have cost Americans $56.6 billion in lost wages, along with almost a quarter of a million jobs between 2008-2013. If the Obama administration wins the war on coal, it could lead to a rather large butcher’s bill: 125,800 jobs and a loss of $650 billion in lost GDP over the next ten years.

Maybe that’s why over half the states oppose this horrific policy, which manifests itself more along the lines of the medusa’s head concerning government regulations.