So, I Guess We’re Not Running Out Of Oil After All 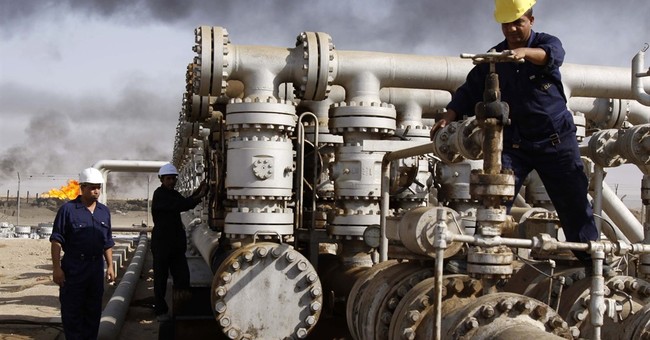 If you read Stephen Moore’s column, he noted how the consensus over oil is wrong. We’re not running out of oil. In fact, many have been saying we’re going to run out since the 1930s:

These stupid predictions of the end of oil have been going on for most of the last century. Just over 100 years ago, the U.S. Bureau of Mines estimated total future production at 6 billion barrels, yet we've produced more than 20times that amount. In 1939 the Department of the Interior predicted U.S. oil supplies would last 13 years. I could go on.

The folks at the Institute for Energy Research recently published a study showing three data points: first, the government's best estimate of how much oil we had in America 50 years ago. The second was how much U.S. oil has been drilled out of the ground since then. And the third is how many reserves there are now. Today we have twice as many reserves as we had in 1950. And we have already produced almost 10 times more oil than the government told us we had back then.

Moore added that technological advancements are increasing oil production. In fact, Kerry Jackson at Investors Business Daily wrote in November that these advances are going to almost triple the amount of fossil fuel resources if research and development continue. At the current rate, she wrote that 2.9 trillion barrels could expand to 4.8 trillion by 2050, which is “almost twice as much as the projected global demand.” And we also know that energy from these resources is guaranteed to keep economies running, growing, and thriving, compared to the wholly inadequate alternatives such as wind and solar that won’t be able to meet our energy needs.

Engineering and Technology Magazine reported this week that BP — the company that once wanted to be known as "Beyond Petroleum" rather than "British Petroleum" — is saying "the world is no longer at risk of running out of resources."

"Thanks to investment into supercomputers, robotics and the use of chemicals to extract the maximum from available reservoirs, the accessible oil and gas reserves will almost double by 2050," Engineering and Technology said.

A BP official told the magazine that "energy resources are plentiful. Concerns over running out of oil and gas have disappeared."

Things are so good, in fact, that Engineering and Technology says "with the use of the innovative technologies, available fossil fuel resources could increase from the current 2.9 trillion barrels of oil equivalent to 4.8 trillion by 2050, which is almost twice as much as the projected global demand." That number could even reach 7.5 trillion barrels if technology and exploration techniques advance even faster.

This information backs up the idea that Earth is actually an oil-producing machine. We call energy sources such as crude oil and natural gas fossil fuels based on the assumption that they are the products of decaying organisms, maybe even dinosaurs themselves. But the label is a misnomer. Research from the last decade found that hydrocarbons are synthesized abiotically.