Friendly Reminder: At Least 72 DHS Employees Are On The Terror Watch List 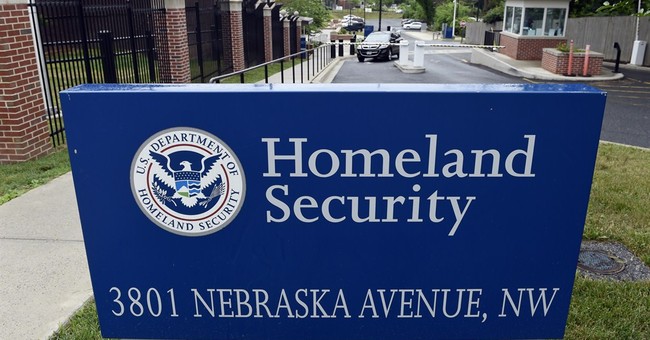 The president of the United States addressed the nation last night over the latest mass shooting, which is now a federal terrorism investigation headed by the FBI. Christine noted that it was a whole lot of nothing. There was nothing to reassure Americans that we’re going to be safe from another attack. Concerning the domestic front, President Obama called for more gun control, specifically a new ban on assault rifles and integrating terror watch lists into our background check system; the latter becoming the latest raison d'être for the progressive left on this issue. So, do they know that there are at least 72 employees of the Department of Homeland Security on the watch list?

Rep. Stephen Lynch (D., Mass.) disclosed that a congressional investigation recently found that at least 72 people working at DHS also “were on the terrorist watch list.”

“The [former DHS] director had to resign because of that,” he said.

DHS continues to fail inspections aimed at determining the efficiency of its internal safety mechanisms, as well as its efforts to protect the nation.

Lynch referred to a recent report that found the Transportation Security Administration, which is overseen by DHS, failed to stop 95 percent of those who attempted to bring restricted items past airport security.

Terror watch lists are accountable to virtually no one; they’re secretive; and they’re zero judicial constraints. The principle of due process, a constitutional right, is non-existent in this parade of horribles. National Review’s Charles Cooke has more on the matter:

We are talking here not about uniformly applicable limitations on an individual right, but about a government program that deprives free people of that right without any due process at all. When Obama and co. say “suspected terrorists,” they don’t mean people who are subject to a warrant or people who have been arrested or people who have been charged. They don’t mean people who have been convicted, either. Rather, they mean people whose names the government has written on a list. That’s simply not acceptable. There are almost one million names on that list, nearly 300,000 of which are linked to no terrorists groups at all. My name could find its way on — either by mistake or because someone took a dislike to me. So could yours. And then what? Then, disgracefully, we would see our rights restricted — or delayed indefinitely — without ever having seen the inside of a courtroom.

Over at the Huffington Post, they listed several ways you could land yourself on the terror watch list that range from being just plain unlucky to posting something suspicious on social media (whatever that means). Moreover, the publication added that no hard evidence is required during the screening process, so by all means–this should be integrated into background checks:

This guidance addresses how to place people in the broader Terrorist Screening Database (TSDB), of which the no-fly list and the selectee lists -- which cover those selected for enhanced screenings before boarding flights -- are both subsections.

In determining whether a suspicion about you is "reasonable," a "nominator" must "rely upon articulable intelligence or information which, taken together with rational inferences from those facts," can link you to possible terrorism

While the document outlines the need for an "objective factual basis," the next section clarifies that "irrefutable evidence or concrete facts are not necessary" to make a final determination as to whether a suspicion is "reasonable.

The late Sen. Ted Kennedy (D-MA) was on the terror watch list, the Weekly Standard’s Stephen Hayes landed himself on the no fly, and now at least 72 employees of the agency that’s meant to protect us are on that list.

Gun control advocates have taken a pernicious turn into authoritarianism by embracing this horrifically flawed policy as the latest front in the fight over Second Amendment rights. I get it; it sounds great. It probably polls well too, but underlying mechanics are a grim underbelly that is antithetical to American values. Moreover, it shows that anti-gunners are willing to sacrifice the Fifth Amendment to eviscerate the Second one.