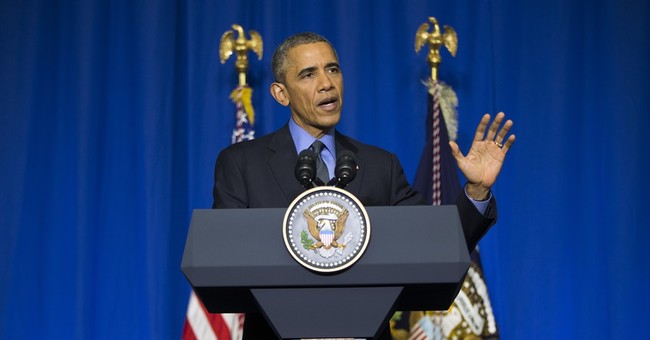 Speaking from the Oval Office for just the third time during his presidency, President Obama addressed the nation on Sunday night touching on a variety of topics: a recap of the events of the attack on Wednesday, a discussion of terrorism over the past decade and how tactics have evolved, visa reforms, gun control measures, and a need to respect Muslims. Unlike past Oval Office addresses, the president stood at a podium rather than sit at his desk.

The president opened his speech by reflecting on the 14 people who were murdered in Wednesday's terrorist attack in San Bernardino, CA. He reflected on the diversity of the victims and how they worked hard to serve their community, and referred to the incident as an "act of terrorism."

Obama then shifted gears to discuss the threat of terrorism in the homeland. He acknowledged that terrorism has "evolved," and that instead of complicated attacks like the ones on September 11, 2001, terrorists are using "less complicated" techniques, like mass shootings. He cited the shootings at Fort Hood and in Chattanooga as examples of this new strategy, which marked the first time either incident had been referred to as "terrorism."

The president then pledged to destroy ISIL, and said that Americans will prevail by being "strong and smart," "resilient and relentless," and by drawing on "every aspect of American power" to defeat the group. He discussed how the military is training Iraqis and Syrians to fight ISIL, and how the military is continuing to "hunt down terrorist plotters in any country." The United States and a coalition of 65 other countries are working to disrupt ISIL's capabilities, and are cooperating with Turkey to help seal its border.

Next, President Obama spoke on domestic policies. He said that the visa-waiver program that the San Bernardino terrorist Tashfeen Malik used to enter the country will be reviewed, and that there will be stronger screening for people who come to the United States to ensure that they did not visit war zones.

Obama also described the need to block those on the no-fly list from purchasing guns, and how it needs to be harder for people to acquire assault weapons. He called on Congress to authorize military force against terrorists, and spoke of the need to avoid a lengthy ground war in Iraq or Syria.

The president then reminded Americans that this should not turn into a war between the United States and Islam, and that the values espoused by ISIL do not represent the vast majority of Muslims across the world. He called on Muslims to police extremism in their own communities, as well. He reminded Americans that they must not discriminate against anyone due to their religious beliefs.

And there you have it. A relatively short speech that didn't really say much new information, didn't do much to reassure Americans that they'll be safe from an attack, and has spurred even more debate.