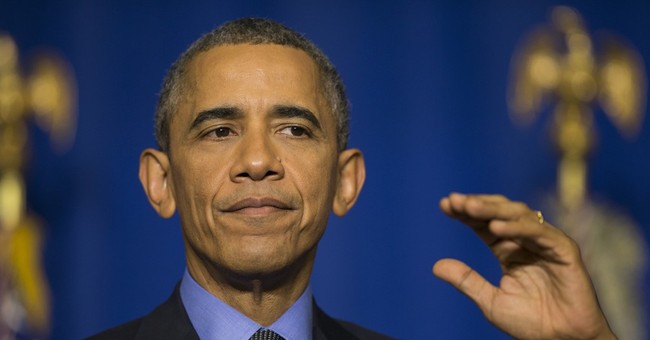 On November 12, President Obama said ISIS had been “contained.” The next day, ISIS launched a deadly terrorist attack in Paris that left 130 people dead. Guy has written about what appears to be a developing scandal within our intelligence community, specifically the suppression­–or disregard–of intelligence about ISIS’s rise that didn’t necessarily fit the view of the Obama administration. Now, George Washington University’s Program on Extremism released a rather disconcerting report showing “unprecedented” “ISIS-related mobilization” in the United States:

Seventy-one individuals have been charged with ISIS-related activities since March 2014. Fifty-six have been arrested in 2015 alone, a record number of terrorism-related arrests for any year since 9/11.

The profiles of individuals involved in ISIS-related activities in the U.S. differ widely in race, age, social class, education, and family background. Their motivations are equally diverse and defy easy analysis.

ISIS-related radicalization is by no means limited to social media. While instances of purely web-driven, individual radicalization are numerous, in several cases U.S.-based individuals initially cultivated and later strengthened their interest in ISIS’s narrative through face-to-face relationships. In most cases online and offline dynamics complement one another.

The spectrum of U.S.-based sympathizers’ actual involvement with ISIS varies significantly, ranging from those who are merely inspired by its message to those few who reached mid-level leadership positions within the group.

The 71 indictments are merely the tip of the iceberg, as U.S. authorities estimate that the number of individuals linked to ISIS is much larger. Our researchers identified a few dozen individuals with reported ISIS links who have not been charged. Similar to those in the legal system, the “At-Large” cohort have no common profile.

Among them, for example, are three teenage girls from the suburbs of Denver, two Somali-American sisters aged 15 and 17, and their 16-year-old friend of Sudanese descent. The trio lived a normal and comfortable life among their unsuspecting families and peers.

Leah wrote yesterday about ISIS planning on having Sirte, Libya as their fallback capital, given that al-Raqqa, Syria, their current base of operations, is being pummeled by Russia and France. Libya was destabilized when the Obama administration decided to assist rebel forces in their effort to oust Muammar Gaddafi, which was ultimately successful in 2011; another testament to the success* of smart power.

ISIS being “contained?” We probably better add that to the long list in which the president has been wrong, beginning when he mocked Gov. Mitt Romney that Russia isn’t our biggest geopolitical foe during the 2012 election. Romney was right–Russia has been allowed to invade Ukraine, annex Crimea, and intervene in the Middle East, where the U.S. has made it a priority to keep them out of this region for the past 50 years. As former U.S. Ambassador to the U.N. John Bolton noted in October, our decision to even entertain de-confliction talks regarding our air forces in Syria legitimizes their presence there.

What is this administration going to do if 150,000 Russian troops enter the region? Russian president Vladimir Putin signed legislation conscripting 150,000 troops in October. While Putin’s office noted that this decree is signed every two years, it comes at a time when Russian airstrikes have intensified. Moreover, this administration’s effete efforts on the Ukraine crisis, among other things, pretty much assured the rest of the world that the lights were on, but no one is home at the Obama White House.

Regarding the taking in of Syrian refugees, the president has mocked Republicans’ rational concern that this could allow terrorists into the country. The FBI has admitted that they cannot screen all of the refugees that are projected to enter the country. We’ve currently accepted 10,000, of which over 2,000 have been resettled. Thirty-one governors have said they will reject Syrian relocation, though the State Department noted that they might not have much choice. Nevertheless, a lack of participation could make things more difficult.

As Kevin Drum of the left-leaning Mother Jones wrote, this mockery of a legitimate issue has the potential of biting Democrats next year by coming off as out of touch and looking un-serious on national security issues. No one wants to look that way, but it’s a criticism that is mostly affiliated with Democrats–hence why the House’s refugee bill passed with a veto-proof majority despite opposition (and a veto threat) from the Obama White House.

*Of course, I'm being sarcastic