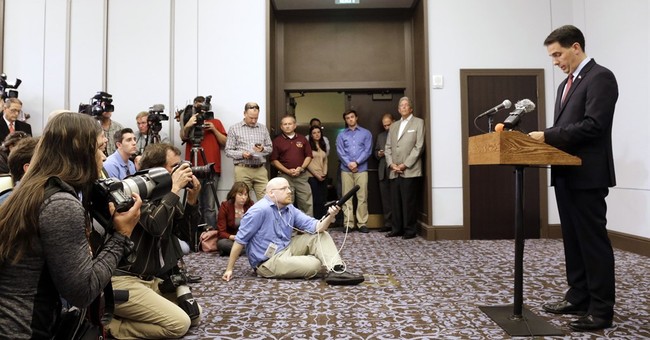 Walker is gone. His presidential candidacy has been nuked, and his supporters are now left dealing with impact winter. So, what the hell happened? As I wrote in a previous post, Walker had the backstory and legislative record to formulate a narrative to carry a national campaign, or at least that’s what it seemed on paper. Alas, that wasn’t the case. And from what has been reported; this campaign certainly had its fair share of problems, ranging from ignorance on the issues, staffing, fundraising, and, of course, The Donald.

Politico reported that Walker simply wasn’t ready for the national stage. His record of invincibility over the concerted political efforts of the left to destroy him overshadowed the fact that just five years ago he was just a county executive. That’s quite the political leap. The piece also noted that the governor knew little about immigration, the Export-Import bank, and foreign policy–three issues that proved to be red meat for conservatives. On immigration, Walker should be given some latitude; Wisconsin isn’t necessarily on the front line of curing illegal immigration, nor is it as big a problem than in, say, Arizona or Texas. Walker’s shakiness on the issues was encapsulated with his changing positions. He had three positions on birthright citizenship in a week, walked a waffled line on immigration, punted on evolution, and gave an awkward answer regarding Obama’s religious background. These are things that Republican primary voters, and donors, don’t want to see.

It evidently grew too big, supported by a fundraising network that would never be able to sustain it consistently. By the end of his presidential bid, Walker had around 90 salaried staff. Additionally, these staffers didn’t know Walker well, or his Wisconsin roots. Most disconcertingly was the reported marginalization of Walker staffers who were responsible for putting the governor in the mansion–and keeping him there. Former Walker aide Liz Mair took to Twitter for a lengthy autopsy on why the Walker candidacy died a quick death; Walker’s staff being some of those observations in that postmortem thread. We’ll get back to this in a second. Back to staffing, Walker’s wife, Tonette, also didn’t find her husband’s campaign manager–Rick Wiley– all that impressive either. In fact, there was chatter among Walker’s donors that Riley should be booted from the campaign, or have his duties split by hiring other operatives:

Campaign sources said Tonette Walker, the Wisconsin first lady, had never warmed to Wiley. During a visit to campaign HQ shortly after the first debate, she wanted to know why her husband hadn’t used all his allotted time in answers (a mistake he repeated in the second debate). She made it clear she saw the lapse as a staff failure, which aides took as a shot at Wiley.

Walker advisers said they were considering bringing back longtime aides, Gilkes or R.J. Johnson, to replace or layer Wiley. Tonette Walker, along with Grebe, then began reaching out to a small group of longtime Walker supporters and inviting them to a meeting at the governor’s mansion on Monday morning — the session that resulted in the campaign’s end.

Wiley wasn’t invited. Two Walker confidants said his future was among the agenda items in the two-hour meeting.

One person close to Tonette Walker said she recognized the deficiencies on the campaign staff and was willing to speak out about them. “People mistake her honesty for combativeness,” this person said. “I’m sorry the staff didn’t like her reality check.” Aly Higgins, Tonette Walker’s personal aide during the campaign, said: “She is protective of her family and has strong instincts, and a clear view of right and wrong.”

Money became a huge issue. To shake up the campaign Riley did plan on reducing staff to 20 people, moving the campaign headquarters from Madison to Des Moines, and mounting a last stand in Iowa, according to Mike Allen and Alex Isenstadt:

Walker, floundering in debates and on the stump, was facing such a sudden drought in donations that even those drastic moves wouldn’t have guaranteed solvency.

We built the machine that we needed to get a governor in just phenomenal shape to take a stage in a presidential debate,” Wiley said. “I think sometimes it's lost on people the largeness of the job. I think people just look at it and say, ‘Wow! Yeah, you know, it's like he's a governor and he was in a recall’ and blah, blah, blah — he’s ready.

After the first Republican debate, the money faucet began to tighten, evident when their Labor Day fundraising push which the Walker campaign hoped would rake in $500,000 only brought in $184,000 (via WaPo):

In a little more than two months, his presidential bid had amassed a debt of roughly $700,000, campaign manager Rick Wiley told the governor in a call Sunday night. A pared-down effort focused on staying afloat in Iowa would still cost around $1 million a month because of ongoing costs associated with ballot access, accounting and vendor contracts.

“It’s going to be tough to raise that million a month, I’ll be honest with you,” Wiley said he told Walker, according to an account he gave The Washington Post on Tuesday evening.

Donations began dwindling in mid-August after Walker’s tentative performance in the first Republican debate, according to several people familiar with the figures. The campaign tried to ramp up fundraising over Labor Day, with a series of events that officials hoped would bring in $500,000. In the end, they netted $184,000, Wiley said.

Another yuge factor was Donald Trump. Trumpmentum has swept the GOP field, and the Donald remains the king of the castle at present. Walker was leading in the polls in Iowa, but the combination of not understanding the Republican base–another Mair observation–a lackluster debate performance, and his inability to use the media attention that was thrust upon him when Walker announced led his numbers to sink rapidly. As Tom Bevan wrote on Real Clear Politics, “Donald Trump ate his lunch.” It also doesn’t help that you deal with Trump by trying to out-Trump him, or be in a similar vein as he is on the issues:

Walker seemed to be the candidate who was most unnerved by Trump, and was among the most willing to modify his positions (specifically immigration and China) in reaction to Trump’s overt nativism. This made Walker look like a waffler at best and an unprincipled politician at worst, which undermined the very rationale of his candidacy. At the same time, Trump managed to steal Walker’s “outsider” appeal as well.

Jonathan Last at The Weekly Standard also noted the Trump factor in contributing to Walker’s demise. On the other hand, Noah Rothman of Commentary disagreed, saying that Walker’s serial flubbing on the issues is more to blame.

Nate Cohn of The New York Times agreed with Rothman, adding that Walker’s departure from the 2016 ring shows “the difficulty of maintaining a broad coalition in a party deeply divided between conservatives and moderates, populists and business interests, the grass-roots and the elites.” Walker was well positioned to reach voters from all of those groups, but simply was not quick enough to adapt:

Mr. Walker faltered so quickly because he simply was not skilled enough to navigate the competing pressures of appealing to the party’s establishment at the same time as arousing its base. It was much like the story of Rick Perry.

Though the entry of Donald Trump into the race made things harder for all the Republican candidates, Mr. Trump can’t be blamed entirely for Walker’s troubles. Mr. Walker was tied with Mr. Bush for second place in national polls heading into the first debate, long after Mr. Trump took a lead in those polls.

Mr. Walker, to put it gently, did not handle this pressure well. His instinct was to move to the right as fast as possible at any point of vulnerability. He staked out a conservative position on birthright citizenship and a fringe position on considering a wall at the Canadian border. These moves alienated party elites and weren’t credible to conservative voters. He quickly reversed positions; in the end, he reassured no one.

Certainly, the combination is fatal; not being able to deal with the media on questions about policy, while your opponent can turn even the worst story about him into gunpowder for his supporters, which leads to boosting poll numbers. Yet, perhaps the case could be made that Walker's reported unpreparedness saved the party a lot of trouble if he started to fall to pieces later on in the campaign.

As Reihan Salem wrote in Slate, regarding policy–Trump has one thing on his side that’s proving to be a yuge advantage over his opponents: no one really expects him to say anything substantive on how he will make America great again, or how he will become the greatest jobs creator God has ever put forth on this Earth. Yet, he also added that Walker isn’t out of the 2016 orbit yet; there’s still the matter of picking a running mate. Liz Mair added that he could be a solid pick for a cabinet position, but not Labor Secretary or a slot on the National Labor Relations Board. She did say that agriculture was a possibility, citing the time during the 2012 recall how dairy farmers told her how they loved Walker, and his campaign devoted time to the subject of agriculture. As for vice president or running again in 2020, Mair wrote that they’re long shots, albeit with positive angles to make an argument for each scenario. Then again, the latter is sort of a punch to the gut given that it’s predicated on a Republican defeat in 2016. She did say Walker would be better than Romney, who was able to win the nomination during his second shot at the nomination, since Walker won’t have Romneycare hanging around his neck. Walker may be out, but he still has a future. His career isn’t done. What he does is up to him.

This is an open thread post. What do you think about Walker, his campaign, and potential future in the party?