Walker Urges Other Candidates to Exit: We Need A ‘Positive Conservative Alternative To The Current Frontrunner’ 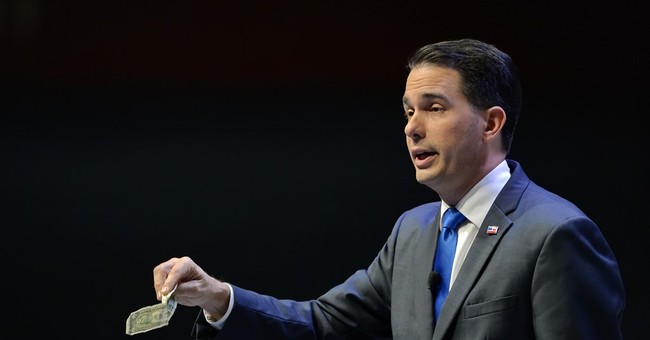 .@ScottWalker is a good man who entered the presidential race after winning three grueling campaigns in four years.

In a very brief press conference, Wisconsin Gov. Scott Walker announced that he was suspending his campaign immediately–and called on others to do the same. The governor noted that the party must get back to the basics, focus on policy, and a positive vision on how to move the country forward. He lamented how this race has devolved into one that’s centered on personal attacks. He reiterated the party’s principles in getting government out of the way to spur economic growth. That it’s the people, not government that creates jobs–and a strong military leads to peace through strength.

He also urged other candidates to also suspend their respective campaigns as well.

“Today, I believe that I am being called to lead by helping to clear the race so that a positive conservative message can rise to the top of the field. With that in mind, I will suspend my campaign immediately,” he said.

“I encourage other Republican presidential candidates to consider doing the same so the voters can focus on a limited number of candidates who can offer a positive conservative alternative to the current frontrunner.”

He closed his remarks by thanking his wife, Tonette, who he said has been “a rock” throughout this process, along with his sons and other members of his family for their unwavering support.

The New York Times  reported earlier this afternoon that Wisconsin Gov. Scott Walker was withdrawing from the 2016 race. In short, his declining position in the polls had all but gutted his fundraising efforts:

Gov. Scott Walker of Wisconsin has concluded he no longer has a path to the Republican presidential nomination and plans to drop out of the 2016 campaign, according to three Republicans familiar with his decision, who spoke on condition of anonymity.

“The short answer is money,” said a supporter of Mr. Walker’s who was briefed on the decision. “He’s made a decision not to limp into Iowa.”

The supporter said that Mr. Walker’s fund-raising had dried up after his decline in the polls and that campaign officials did not feel they could risk going into debt with the race so uncertain. The governor, who was scheduled to be in New York and Washington this week, partly to raise money, had built up an expansive staff, bringing on aides and consultants detailed to everything from Christian conservative outreach to Super Tuesday states. But his fund-raising did not keep pace with the money needed to sustain such an infrastructure.

Walker was seen as a strong contender for the Republican nomination, given his backstory and record as the governor of Wisconsin. He was leading in the polls in Iowa, but saw a precipitous decline in support throughout the summer. The latest CNN/ORC poll seems to have been the final nail in the coffin, as Walker barely drew 1 percent in the poll.

After the press conference, Fox News’  Bret Baier asked Brit Hume what happened to this candidacy.

Hume said that Walker didn’t show the fighting spirit the Republican base was yearning for this cycle. The irony is that Walker is a fighter–and proved that point during his grueling first term as governor of Wisconsin. Hume noted this, but added that we didn’t see that on the campaign trail–or in the debates–which proved to be a fatal mistake.

Walker’s full remarks are below:

As a kid, I was drawn to Ronald Reagan because he was a Republican and a conservative. But most of all, I admired him because of his eternal optimism in the American people.

That thought came into my head when we were all standing at the Reagan Library last Wednesday. President Reagan was good for America because he was an optimist.

Sadly, the debate taking place in the Republican party today is not focused on that optimistic view of America. Instead, it has drifted into personal attacks.

In the end, I believe that voters want to be for something and not against someone. Instead of talking about how bad things are, we want to hear about how we can make them better for everyone.

We need to get back to the basics of our party:

We are the party that believes that people create jobs - not the government - and the best way to grow the economy is to get the government out of the way and build it from the ground up.

We are the party that believes that the way to measure success in government is by how many people are no longer dependent on the government - because we ultimately believe in the dignity of work.

We are the party that believes that a strong military leads to peace through strength and that will protect our children and future generations - we believe that good will triumph over evil.

We are the party that believes in the American people - and not the federal government.

To refocus the debate will require leadership. While I was sitting in church yesterday, the pastor's words reminded me that the Bible is full of stories about people who were called to be leaders in unusual ways.

Today, I believe that I am being called to lead by helping to clear the race so that a positive conservative message can rise to the top of the field. With that in mind, I will suspend my campaign immediately.

I encourage other Republican presidential candidates to consider doing the same so the voters can focus on a limited number of candidates who can offer a positive conservative alternative to the current frontrunner. This is fundamentally important to the future of the party and - ultimately - to the future of our country.

This is a difficult decision as so many wonderful people stepped up to support our efforts. Tonette and I are so very thankful for the many outstanding volunteers and the excellent staff who helped us throughout the campaign. You have become like family to us.

And speaking of family, I want to personally thank my wife Tonette - who has been a rock - as well as our amazing sons Matt and Alex. I thank my parents, my brother David and his family - and all of our other family and friends for their love and support.

Most of all, I want to thank God for His abundant grace. Win or lose, it is more than enough for any of us.

Gov. Walker is the second candidate to drop out of the race. The first was former Texas Gov. Rick Perry, who suspended his campaign earlier this month.