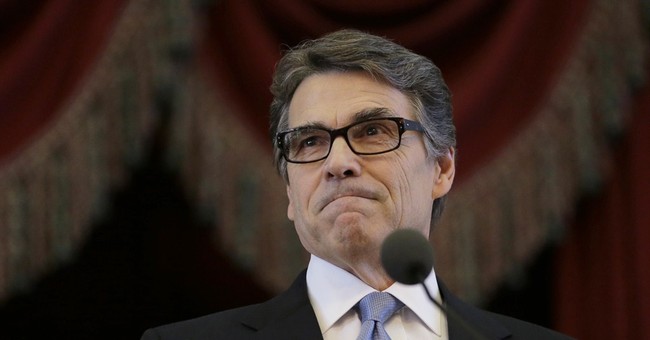 Today former Republican Gov. Rick Perry addressed the Eagle Forum in St. Louis, Missouri and announced he was suspending his presidential campaign. He noted that he feels that the 2016 Republican field is the strongest the party’s had “in a generation.” As a result, he feels the GOP "is in good hands,” as he steps aside [emphasis mine]:

When I gave my life to Christ, I said, “your ways are greater than my ways. Your will superior to mine.”

Today I submit that His will remains a mystery, but some things have become clear.

That is why today I am suspending my campaign for the presidency of the United States.

We have a tremendous field – the best in a generation – so I step aside knowing our party is in good hands, and as long as we listen to the grassroots, the cause of conservatism will be too.

I share this news with no regrets. It has been a privilege and an honor to travel this country, to speak with the American people about their hopes and dreams, to see a sense of optimism prevalent despite a season of cynical politics.

And as I approach the next chapter in life, I do so with the love of my life by my side, Anita Perry. We have our house in the country, we have two beautiful children and two adorable grandchildren, four dogs, and the best sunset from our front porch that you could ever imagine.

Life is good. And I am a blessed man.

Gov. Perry was discussing his early life as a Boy Scout, Eagle Scout, his military service in the air force, and selling bibles door-to-door, which he said prepared him for his career in politics. He was selling a message to people. He also criticized President Obama, as “a divider who has sliced and diced the electorate;” Congress for neglecting its constitutional obligations, such as maintaining a strong military; and Washington for centralizing too much power in the hands of the political class. He also mentioned how our current foreign policy has “emboldened our adversaries,” allowed ISIS to establish a large foothold in the Middle East, and ushered in the flawed nuclear agreement with Iran.

Yet, he also touched upon his record as governor, his record of creating a million plus jobs, securing the border, cutting taxes, passing balancing budgets, and increasing high school graduation rates. It’s a great narrative for a presidential run, but like all national campaigns; you need to raise the cash.

In August, Katie wrote that the Perry campaign would stop paying their staffers due to a lack of cash. By conservative estimates, candidates need to raise at least $75 million just to tread water in the early voting states. On August 25, Perry spokeswoman Lucy Nashed said that some staffers were back on salary, but only in Iowa and South Carolina.

By late August, Perry’s Iowa staff consisted of only one paid staffer, strategist Jamie Johnson, according to Politico. The rest of the Iowa staff was let go, as the campaign tried to recalibrate its objectives, that being mobilizing operations in South Carolina.

By September 2, The Washington Post  wrote that the Perry campaign no longer had paid staffers in New Hampshire:

Rick Perry's presidential campaign has lost its entire staff in New Hampshire, according to a former top adviser there to the former governor.

"There is no staff in New Hampshire," Mike Dennehy said Wednesday, a day after word spread that one of Perry's remaining staffers in the Granite State had defected to Ohio Gov. John Kasich's campaign.

Dennehy, who is no longer working for Perry's campaign in a formal capacity, said he had personally encouraged the New Hampshire staff to look for other work. Dennehy said he does not plan to join another campaign.

Perry also included in his remarks that we cannot have a Republican “divider-in-chief,” nor could we “indulge nativist appeals that divide the nation further.” I’ll give you a few guesses as to which candidate he was referring to with that one:

Let me be crystal clear: for those of us in Christ, our citizenship is first and foremost in God’s kingdom, our brothers and sisters are those made in the image of God, and our obligation – after loving God with all our heart, mind and soul – is to love our neighbors as ourselves, regardless of where they come from.

Demeaning people of Hispanic heritage is not just ignorant, it betrays the example of Christ. We can enforce our laws and our borders, and we can love all who live within our borders, without betraying our values.

It is time to elevate our debate from divisive name-calling, from soundbites without solutions, and start discussing how we will make the country better for all if a conservative is elected president.

Yet, it’s not all doom and gloom. He noted how optimism is ingrained in conservatism, and that he’s confident that America can be great again. Gov. Perry exits the presidential stage; confident that our nation’s best days are yet to come.