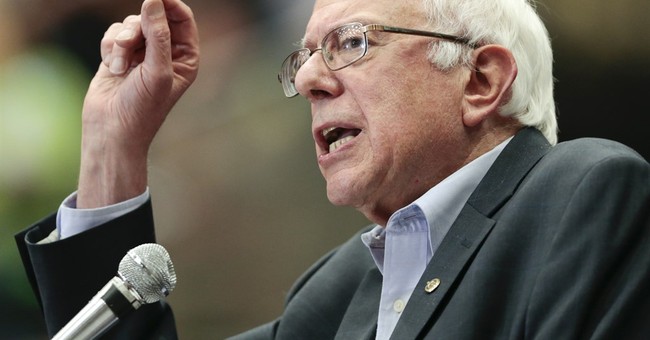 Yeah, this isn’t going to sit well with the anti-gun wing of the Democratic Party. Sen. Bernie Sanders (I-VT) said accurately that 99.9 percent of gun owners are law-abiding citizens. This remark was made last Sunday when CNN’s Jake Tapper asked Sanders about his support for the Protection of Lawful Commerce In Arms Act (PLCAA). In essence, the PLCAA is a great law that protects the gun industry from being sued if their firearms are used in criminal activities (via Congressional Research Service):

The Protection of Lawful Commerce in Arms Act (PLCAA, P.L. 109-92) was passed in 2005. The PLCAA generally shields licensed manufacturers, dealers, and sellers of firearms or ammunition, as well as trade associations, from any civil action “resulting from the criminal or unlawful misuse” of a firearm or ammunition, but lists six exceptions where civil suits may be maintained. This act was introduced in response to litigation brought by municipalities and victims of shooting incidents against federally licensed firearms manufacturers and dealers, some of whom were located outside the state where the injuries occurred. Consequently, most lawsuits brought after the enactment of this law have been dismissed notwithstanding the exceptions that would permit a civil suit to proceed against a federal firearms licensee. This report provides an overview of the PLCAA and its exceptions, and discusses recent judicial developments.

For the families of the victims of the horrific Newtown shooting who filed a lawsuit with Remington Arms last year, they tried to use the negligent entrustment clause to justify their claim:

As used in subparagraph (A)(ii), the term “negligent entrustment” means the supplying of a qualified product by a seller for use by another person when the seller knows, or reasonably should know, the person to whom the product is supplied is likely to, and does, use the product in a manner involving unreasonable risk of physical injury to the person or others.

Concerning the Newtown case, that’s a bit of a stretch.

Nevertheless, Tapper asked Sanders why he voted for PLCAA in 2005 (via MSNBC) [bold text is Sanders’ response]:

In the CNN interview, Tapper asked Sanders, “Earlier this year, the parents of one of the 12 innocent people killed during the Aurora movie theater shooting, they saw their lawsuit to hold ammunition sellers liable for the attack, they saw that dismissed. And one of the reasons was a law that you voted for which protects manufacturers of firearms and ammunition from being sued. Why did you vote that way?”

Sanders stressed that the NRA is not a fan of his – he’s voted, for example, to close the gun-show loophole and in support of instant background checks – before explaining:

“Now, the issues that you’re talking about is, if somebody has a gun and it falls into the hands of a murderer, and that murderer kills somebody with the gun, do you hold the gun manufacturer responsible? Not anymore than you would hold a hammer company responsible if somebody beat somebody over the head with a hammer. That is not what a lawsuit should be about.

“And this is part, by the way, I may say, of – you know, folks who do not like guns is fine, but we have millions of people who are gun owners in this country; 99.9 percent of those people obey the law. I want to see real serious debate and action on guns. But it is not going to take place if we simply have extreme positions on both sides. I think I can bring us to the middle.”

As Mary Katherine Ham wrote over at Hot Air, Sanders’ support of PLCAA has irked some at liberal sites, like Slate, calling the senator’s vote for legislation “profoundly disturbing,” and the bill itself “cruel.” The latter comment refers to the fact that two parents whose daughter was killed in the 2012 Aurora shooting have to pay $200,000 in legal fees to the gun companies they tried to sue.

Still, the PLCAA is a good law that protects gun manufacturers and ammo suppliers against frivolous lawsuits. Firearms made by these companies–and the ammo– aren’t meant to be used for criminal purposes. Law-abiding citizens, police officers, and members of the military use firearms and ammo for self-defense, hunting, and shooting sports; it’s an extension of our Second Amendment rights. Sanders’ remarks about gun owners and the logic of a lawsuit in connection to the purpose of the PLCAA is spot on–and maybe the only thing where I find common ground with this self-avowed socialist.

Well, maybe we also agree on Israel, too.

Last note: The PLCAA was solid bipartisan piece of legislation.