Families Of The Victims Of Newtown Sue Gun Manufacturer 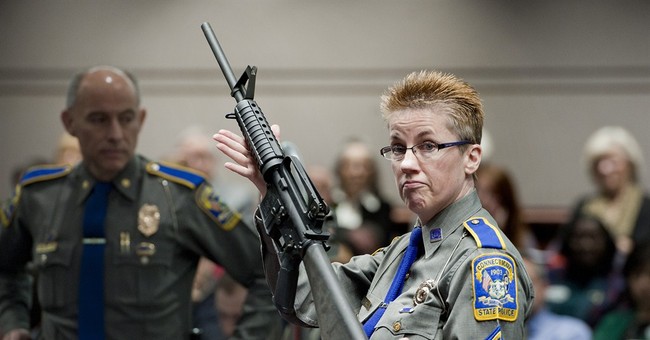 Editor's Note: The post initially reported that the families were suing Bushmaster proper, it turns out to be Remington Arms.  We apologize for the error.

The families of nine victims of the horrific Newtown shooting at Sandy Hook Elementary are suing Remington Arms.  They're argument is that the AR-15 rifle was used by Adam Lanza to murder more than 20 people in December of 2012, most of them children, packs too much firepower for civilian use.

The lawsuit, which is frivolous to say the least, citing negligence and wrongful death, was filed yesterday–the day after the two-year anniversary of the Sandy Hook shooting (via Associated Press):

"In order to continue profiting from the sale of AR-15s, defendants chose to disregard the unreasonable risks the rifle posed outside of specialized, highly regulated institutions like the armed forces and law enforcement," the plaintiffs wrote in the complaint.

The so-called AR-15 rifle was first built by Armalite for military use, but the design was later acquired by Colt, which in the early 1960s began marketing the semi-automatic AR-15 rifle as the civilian version of its fully automatic M-16.

Many other companies have since begun manufacturing and selling AR-15-type rifles. The weapons are popular in shooting competitions due to the light weight of the gun and ammunition and the weapon's accuracy.

Bill Sherlach, whose wife, Mary, was killed in the shooting, said he believes in the Second Amendment but also that the gun industry needs to be held to "standard business practices" when it comes to assuming the risk for producing, making and selling a product.

"These companies assume no responsibility for marketing and selling a product to the general population who are not trained to use it nor even understand the power of it," he said.

Jacob Sullum of Reason wrote that the victims’ families are dodging the Protection of Lawful Commerce in Arms Act (PLCAA) by trying to stretching the “negligent entrustment” clause of the law:

[T]he plaintiffs argue that they are guilty of "negligent entrustment" because they made a gun with no legitimate civilian uses available to the general public. Joshua Koskoff, an attorney representing the plaintiffs, told The Wall Street Journal "there is so much ample evidence of the inability of the civilian world to control these weapons that [it] is no longer reasonable to entrust them to [civilians]."

Over at Bearing Arms, Bob Owens points out why this lawsuit will fail, but also documenting a brief history of the AR-15–“AR” standing for Armalite– which been manufactured since 1957. As for the reloading mechanism, it’s no different from a handgun; both are semi-automatics. Points that pretty much undercut Mr. Koskoff’s claim that the super spooky AR-15 cannot be entrusted in civilian hands:

The claim of the Sandy Hook families that the AR-15 design is “is a military weapon unsuited for civilian use” is an unsolicited and uneducated opinion, nothing more.

Purely as a matter of fact, the American gun purchasing public has found the platform to be incredibly well-suited for civilian use, and because of this fact, the AR-15 is the most common centerfire rifle sold in the United States year in and year out.

It has become so popular because the AR-15 is a mature technology that is lightweight, is reasonably powerful, has good ergonomics, and has great aftermarket support.

Purchasers of AR-15s like the fact that they can be fired by people of any size, are accurate and easy to modify for specific kinds of shooting using a wide range of aftermarket products. They are required or optional firearms in many target shooting disciplines, are increasingly used (in various calibers) as hunting firearms for most game animals in the United States. Many firearms experts also hold the opinion that the AR-15 is arguably the best self-defense firearm platform that a civilian may readily own in the United States.

Put bluntly, the Sandy Hook parents don’t have a viable case. They are acting on powerful emotions, but not on logic, and not on the law.

Expect for a judge to toss this case as being without merit almost immediately.

As the AP noted, the PLCAA protects gun manufacturers from these sorts of lawsuits–and rightfully so. Overall, the law prevents litigation by individuals against gun manufacturers whose product was unknowingly used in a criminal act.

As Walter Olson over at Cato wrote that even liberal justices agreed it was constitutional. It also should be noted that Bushmaster and the gun dealer where the late Mrs. Lanza purchased her AR-15 did not break any laws.

Sullum, who’s written about objections to the PLCAA on federalist grounds, added that the law:

Does include an exception for “an action brought against a seller for negligent entrustment.” But in this case the plaintiffs are stretching that concept to cover an entire segment of the firearms industry, without regard to the individual characteristics of gun buyers or the seller's knowledge of those characteristics (except for the fact that they are neither soldiers nor police officers).

To give you a sense of how far-fetched that claim is, the Journal reports that Dennis Henigan, former director of the Legal Action Project at the Brady Center to Prevent Gun Violence, "said the lawsuit would test the limits of the negligent-entrustment legal theory." Henigan, a leading advocate of the litigation that provoked the Protection of Lawful Commerce in Arms Act, explained that "the issue in this case will be whether courts are willing to construe the doctrine of negligent entrustment so broadly as to encompass a theory of liability that is based on the sale of a particular gun to the general public instead of to a potentially particular dangerous individual."

So, we shall see how this plays out, although it’s more than likely that a judge will toss this suit.

Olson also wrote “the PLCAA for the most part codified the common law treatment of gun liability as it had stood for centuries, thus advancing both a constitutional liberty and the legitimate freedom of interstate commerce against efforts to obtain a radical change in doctrine.”

He also noted that litigation is part of the strategy by anti-gun liberals to squeeze gun-related businesses that cannot afford long-term legal fees.

“We may hope that the courts are alive to the ongoing importance of PLCAA, and willing, as appropriate, to apply the tool of sanctions against legal strategists and campaigners who would seek to circumvent its provisions in the name of ideological grandstanding, profit, or revenge,” he added.

Amen to that, sir.

As a nation, we should grieve with these parents, but that all comes to an end when you begin a campaign to infringe on the civil rights of others. As Katie wrote, two years after Sandy Hook more Americans support gun rights that gun control. Gun-related homicides are down 39 percent according to Bureau of Justice Statistics; violent crime continues to go down. In 2013, Pew compared 1993 (the peak in U.S. gun homicides) to 2010 and found such crimes were down 49 percent. Additionally, the “victimization rate for other violent crimes with a firearm—assaults, robberies and sex crimes—was 75% lower in 2011 than in 1993.”

Despite the tragic shooting near Philadelphia recently, there is no gun violence epidemic; it’s just media feeding into the hysteria that there is one.

This lawsuit is more far-reaching on our freedom tat the surrounding areas of Newtown; any freedom-loving American should hope it’s tossed in the days to come.