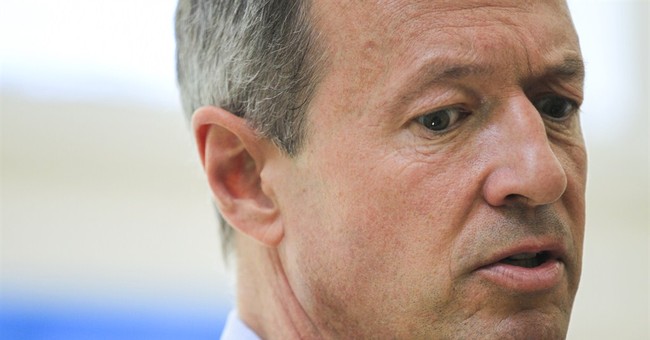 Former Maryland Gov. Martin O’Malley is “pissed.” I mean, really mad that we haven’t passed new gun laws. So, what did O’Malley say in his rather intense email over the weekend (via WaPo) [emphasis mine]:

"It's time we called this what it is: a national crisis," O'Malley said in the e-mail, which carried the subject header "I'm pissed" and included links to a Web page to provide contact information to his campaign. He used the word "pissed" four more times in the e-mail.

O'Malley's choice of words -- more common among teenagers than presidential candidates -- seemed a gambit to attract attention to a campaign mired in the low single digits in early-state polls. But a spokeswoman said the tone was a true reflection of how the former Maryland governor, who has used salty language on other recent occasions, feels about the issue.

In the e-mail, O'Malley pointed to his record as governor, which included passage in 2013 of a wide-ranging gun-safety bill. On the national level, he is calling for an assault weapons ban, stricter background checks and efforts to prevent "straw purchases" of guns, such as fingerprinting requirements, which Maryland implemented.

O'Malley's proposals are more specific than anything his Democratic rivals, including former secretary of state Hillary Rodham Clinton and Sen. Bernie Sanders (I-Vt.), have suggested in recent days. In the past, Clinton has supported banning assault weapons and other measures favored by gun-control advocates. Sanders has a mixed record that includes voting against the landmark Brady bill that required background checks and a waiting period before buying a firearm.

So, with regards to “required fingerprinting” for handgun purchases, does O’Malley know that a similar statute is law in New Jersey, and it got a woman killed? Carol Bowne in Berlin Township needed a gun to protect herself from her ex-boyfriend, but her fingerprints were required for NJ’s onerous firearm ID card. The application process reportedly takes at least two months (absurd), but it was a moot point in Bowne’s case; she was murdered earlier this month by her ex-boyfriend, who was being pursued by law enforcement for her murder until he was discovered in a garage in a home less than two miles from Bowne's residence; he hung himself. The Berlin Township Police Chief, Leonard Check, said at the time that her fingerprint information wasn’t even taken. The Courier Post reported that Bowne was already in the process of obtaining a ID card for months.

Second, why are we delving into so-called “assault weapons” bans? Dylann Roof used a handgun, and high-capacity magazine bans are nothing more than window dressing. It did little to prevent Elliot Rodger from unleashing his fury on the UCSB campus in 2014–California has a high-capacity magazine ban.  In fact, none of Obama's gun control proposals after Sandy Hook would have prevented Roof's senseless act of racist violence.

On a side note, it’s right that Sanders is leaving some liberals sort of shocked that he voted against the Brady bill, which mandated background checks on all gun purchases. Slate’s Mark Joseph Stern found it “profoundly disturbing” that Sanders voted for the 2005 Protection of Lawful Commerce in Arms Act*, which prevents gun manufacturers from being sued for any criminal activity conducted by one of their weapons systems. It’s a great law.

Apparently, liberals don’t know that Vermont is a constitutional carry state, meaning you don’t need a permit to conceal or open carry (that’s awesome). Oh, and the crime rate in Vermont is not very high, with an estimated 70-75 percent of Vermont residents owning firearms.

Gun dealers with a federal firearms license are required to conduct background checks on all gun purchases (Brady bill), felons can’t own guns, members of the military dishonorably discharged cannot own guns, convicted domestic abusers can’t own guns, people awaiting trial on pending criminal charges can’t own guns; the current slate of laws and regulations are more than adequate to keep the American public safe.

It’s when people conduct straw purchases for criminals, get firearms from shady FFL dealers, or steal them from law-abiding citizens that the chances for senseless violence increase astronomically. Why?  When people break the law, lives are potentially put at risk. With firearms, that’s especially the case–and no new laws will ever be able to cut down on the three ways in which criminals are most likely to obtain firearms. All new gun laws do is leave the innocent public at risk–and infringe on one of our oldest civil rights.

BONUS: Pro-abortion O’Malley says, “A single life in America is worth more than all the guns in the United States.”

A single life in America is worth more than all the guns in the United States. https://t.co/qCjxvV9hmy