Oh My: Graham Says Paul Is ‘Behind’ Obama And Hillary On Foreign Policy 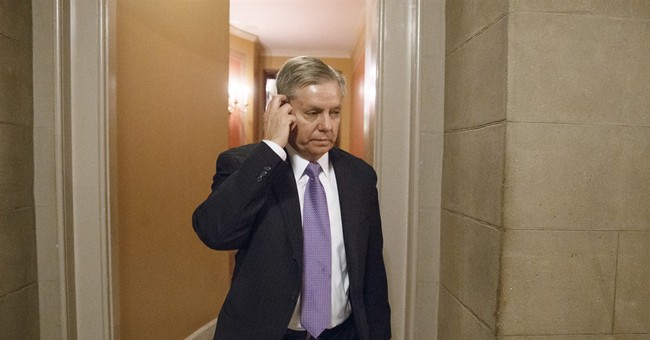 As Dan mentioned, Sen. Lindsey Graham (R-SC) is 91 percent sure that he’ll run for president in 2016–with Meghan McCain saying he would do well; I'll just leave this here. While the 91 percent comment may have been somewhat facetious, it seems to be another event in the annals of what appears to be a Paul-Graham feud.

Now, Graham has said that his disagreements with Paul isn't personal. Earlier today, he noted on Morning Joe that both of them play golf, and have backed the similar legislation in the Senate, namely reforms bills for Social Security and Medicare. Foreign policy is where this (sort of) professional friendship hits rocky shoals. Graham contends that Paul has “a isolationist view of the world that I don’t share.”

Joe Scarborough pushed Graham by asking if he supports Rand Paul or Hillary Clinton’s worldview. Graham said he’s more aligned with anyone who feels that America should be leading force in the world, but also said that Hillary backed a president who has led from behind. Then, he circled back to Paul:

Earlier this month, Politico  had a piece that charted the clashes between these two men, which at times have become heated; the “Crazy Bastard” fight on the Senate floor over Guantanamo Bay probably serves as the best example of the deep, ideological differences these men have on foreign policy.  As the article mentioned, It's probably the reason why Graham feels compelled to enter the race to stop Paul:

In 2012, Paul’s political action committee began airing TV ads attacking West Virginia Sen. Joe Manchin, a Democrat who was up for reelection, for opposing a Paul-sponsored bill that would have blocked foreign aid to Egypt, Pakistan and Libya. In response, Graham, who oversees a key Appropriations subcommittee charged with disbursing foreign aid, went so far as to appear on a conference call with Manchin to argue that cutting off the packages could have adverse effects in the region.

A month later, Graham and Paul appeared on the Senate floor to debate whether to close the Guantánamo Bay terrorist detention facility. What ensued would soon become known as “The Crazy Bastard Fight.”

“Simply stated,” Graham said, “the American people don’t want to close Guantánamo Bay, which is an isolated, military-controlled facility, and bring these crazy bastards who want to kill us all to the United States.”

“I want to make formal objection to the ‘crazy bastard’ standard,” Paul swung back. “If we’re going to lock up all the crazy bastards, for goodness sakes would you not want, if you’re a crazy bastard, to have a right of trial by jury?”

In 2013, Graham appeared on the floor to lash Paul for his nearly 12-hour protest over the Obama administration’s drone policy — which the South Carolina senator labeled a “disservice.”

The most recent flareup came on Sunday, when Graham, appearing on Fox News, said Paul’s “foreign policy is to the left of President Obama.” He added that any Republican candidate would have struck a better Iran deal than Obama. “Except maybe Rand Paul.”

The publication added that Graham’s aides are saying the South Carolina Senator is setting himself up as “foil” to be used to attack Rand’s views, especially during the debates. Paul supporters have refused to comment thus far, fearing it will only add fuel to a Graham candidacy. Then again, Jesse Benton, a former Paul campaign manager who is helping running point on a pro-Rand super PAC, told Politico, “Punching down third-tier candidates doesn’t often make a lot of sense.”

If Graham decides to run–and it sounds as if he's more than willing–his 2016 game plan is to “exceed expectations in Iowa, finish in the top-tier in New Hampshire, and win South Carolina.” He figures by then, only three of four candidates would be in a condition to move on with their presidential aspirations–and he think he can be in that group.