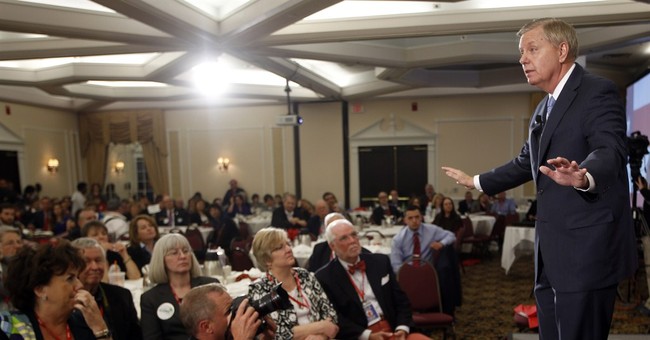 That statement might seem a little bizarre at first blush. Ninety-one percent? But I think context is important here.

Fox News Sunday anchor Chris Wallace prefaced his question about whether or not Lindsey Graham is running for president by reminding him that Carly Fiorina recently noted on his show that her chances of running were “higher than 90 percent.”

“What’s the percent chance that you’re going to get in?” he then asked him.

“91 percent ... I think I got a good message, I think I've been more right than wrong on foreign policy ... I've been a problem-solver in Washington. And I think I've got something to offer the party and the nation. I’ll make that decision in May [and] if I can raise the money, I’ll do it.”

Presumably, however, if you ask grassroots conservatives what they think of Lindsey Graham running for president in 2016, the responses would range from mild amusement to intense anger for all the reasons Wallace brings up. But maybe he’s got two things going for him: First, he would likely be running for president at a time when national security issues are at the forefront. Consequently, as a foreign policy hawk, this would be a distinct advantage, especially as ISIS continues its murderous atrocities and Iran moves closer to the bomb. Second, he’s also a deft and savvy campaigner. Graham, as he points out in the interview, soundly defeated six primary opponents in 2014 when he was largely viewed as extremely vulnerable. It also doesn’t hurt that South Carolina is conveniently situated as a key early primary state—a state he thinks he can win despite what the polls say.

“If I’m on the ballot, I’m going to win South Carolina,” he told Chris Wallace.

Perhaps. But where does he go from there? Newt Gingrich won South Carolina in 2012—and flamed out shortly thereafter. Graham therefore would not only need to win South Carolina, but not lose any momentum (or deplete his coffers) for months afterwards. And how likely is that?

In any case, he’s going to run, or so it seems. So I guess a reasonable question might be why shouldn’t he?

Hell, everyone else is.