Danish PM: ‘Denmark Has Been Hit By Terror’ 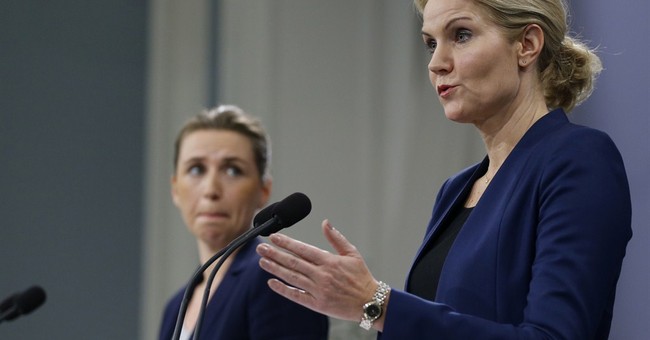 By now, you must have heard about the dual shootings in Denmark. The first attack occurred at a café in Copenhagen, where cartoonist Lars Vilks had organized a free speech event. Vilks has drawn the ire of the Muslim community for his drawing of the prophet Muhammad; he’s on an al-Qaeda hit list, and an American woman was sentenced to 10 years in prison for a plot to assassinate him. One man was killed in the attack on the café, while three police officers were wounded.

The second shooting occurred at a synagogue not far from the café. A young Jewish man was shot in the head and later died of his injuries, according to The New York Times. He had been guarding he entrance of the synagogue, where almost 100 people were inside celebrating a bat mitzvah. Two police officer were also wounded in the attack.

Later that night, police staked out an address of the alleged perpetrator. When he arrived, Danish police confronted him and gunfire ensued. Danish police killed him in the firefight. He’s the only person suspected of being responsible for both attacks.

Danish Prime Minister Helle Thorning-Schmidt said “Denmark Has Been Hit By Terror,” and later visited the synagogue saying that “The Jewish community is a large and integrated part of Danish society…together we will shield Denmark from the kind of attack we saw last night:”

The Copenhagen police said on Sunday that they had shot and killed a man they believed carried out two attacks that left two people dead, one at a cafe and one outside a synagogue, and wounded at least five policemen.

The police have identified the suspect but did not name him; they said Sunday that he was from Copenhagen and previously “known” to the security and intelligence services. But they said that there is no indication that he had traveled to Syria or Iraq to fight as a jihadist.

The first attack took place on Saturday, when a gunman sprayed bullets into the cafe where a Swedish cartoonist who had caricatured the Prophet Muhammad was speaking. That attack killed one man, who was identified on Sunday by the Danish media as Finn Norgaard, 55, a film director. Hours later, early Sunday, a man was shot and killed outside the city’s main synagogue, according to the police.

Dan Rosenberg Asmussen, a leader of Denmark’s Jewish community, said that the victim at the synagogue was a young Jewish man who was guarding the entrance of a building adjacent to the synagogue. He said that some 80 people were inside the synagogue at the time, celebrating a bat mitzvah, and that the police had been asked to provide protection after the cafe shooting. Denmark’s chief rabbi, Jair Melchior, identified the Jewish victim as Dan Uzan, 37, a longtime security guard.

“Denmark has been hit by terror,” the Danish prime minister, Helle Thorning-Schmidt, said on Sunday. “We do not know the motive for the alleged perpetrator’s actions, but we know that there are forces that want to hurt Denmark. They want to rebuke our freedom of speech.” She added: “This is not a war between Islam and the West.”

She later visited the Copenhagen synagogue and said: “The Jewish community is a large and integrated part of Danish society,” adding, “Together we will shield Denmark from the kind of attack we saw last night.”

Jorgen Skov, a police inspector, said at a news conference on Sunday in Copenhagen that the police had shot and killed the suspect after he opened fire on officers in the Norrebro neighborhood. The shooter was confronted by the police as he returned to an address that they were keeping under surveillance, Mr. Skov said. The police suspected that the man had been involved in the killings, in part because of information from video surveillance and from a taxi driver who had picked up the suspect. When the suspect returned to his address at 4:50 a.m., the police said, he responded to their shouts with gunfire and was killed.