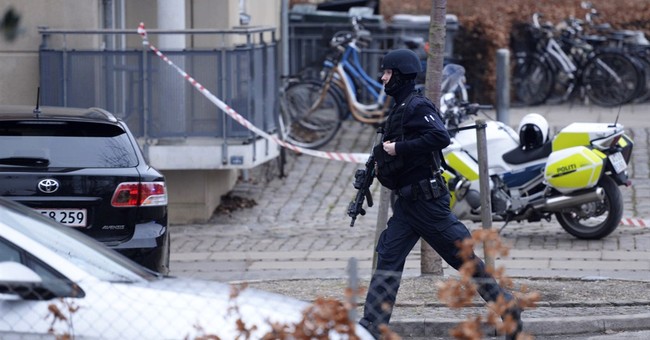 Two gunmen fired 30-40 shots during a free speech event at a café in Copenhagen, Denmark earlier this morning; the gunmen remain at large, according to the BBC. One civilian has been killed and three Danish police officers were shot in the attack that is eerily similar to the tragic Charlie Hebdo shootings in Paris last January.

Lars Vilks, an artist who caused uproar amongst Muslims in 2007 with his cartoon depictions of the Prophet Muhammad, organized the event (via ABC News):

Shots were fired Saturday at a cafe in Copenhagen that was hosting a freedom of speech event organized by Swedish artist Lars Vilks, who has faced numerous threats for caricaturing the Prophet Muhammad.

Some 30 bullet holes ripped through the window of the Krudttoenden cafe and at least two people were taken away on stretchers, including a uniformed police officer, the TV2 channel said Saturday.

"I heard someone firing with an automatic weapons and someone shouting. Police returned the fire and I hid behind the bar. I felt surreal, like in a movie," Niels Ivar Larsen, one of the speakers at the event, told the TV2 channel.

Helle Merete Brix, one of the event's organizers, told The Associated Press that Vilks was at the meeting but not injured.

"I saw a masked man running past," she said. "A couple of police officers were injured."

"I clearly consider this as an attack on Lars Vilks," she added, saying she was ushered away with Vilks by one of the Danish police guards that he gets whenever he is in Denmark.

François Zimeray, the French ambassador to Denmark who was at the conference, tweeted that he was "still alive."

Vilks, a 68-year-old Swedish artist, has faced several attempted attacks and death threats after he depicted the Prophet Muhammad as a dog in 2007.

A Pennsylvania woman last year got a 10-year prison term for a plot to kill Vilks. In 2010, two brothers tried to burn down his house in southern Sweden and were imprisoned for attempted arson.

That woman’s name is Colleen LaRose (aka “Jihad Jane), who was arrested in 2010. Vilks is also on al-Qaeda’s “hit list" due to his cartoons.

Still alive in the room

BBC reports that there were two gunmen and they are still at large. This looks like a less successful Charlie Hebdo. http://t.co/HBEPvqqZHi

UPDATE II:  French Ambassador said that this was a Charlie Hebdo-style attack, but the shooters couldn't get inside the cafe. He noted that at least 50 shots were fired, while Danish police say 200 (via the Telegraph):

Unidentified assailants Saturday fired on a building in Copenhagenwhere a debate on Islam and free speech was being held, the French ambassdor to Denmark told AFP from inside the venue.

"They fired on us from the outside. It was the same intention as (the January 7 attack on) Charlie Hebdo except they didn't manage to get in," Francois Zimeray said by telephone.

Zimeray said earlier on Twitter that he was not harmed.

"Intuitively I would say there were at least 50 gunshots, and the police here are saying 200," he told AFP.

"Bullets went through the doors and everyone threw themselves to the floor. We managed to flee the room, and now we're staying inside because it's still dangerous. The attackers haven't been caught and they could very well still be in the neighbourhood."

UPDATE III: Here's a photo of the suspect.

Over at Hot Air, Ed Morrissey wrote that police had found the getaway car. Suspects probably couldn't have made it far since Danish police shut down the city.  The chilling audio of the shooting can be heard here.

UPDATE IV: Danish Prime Minister Helle Thorning-Schmidt calls the cafe shooting a "terror attack."  One person has tragically been killed–and police are looking for one suspects instead of two.  It was originally reported that two suspects were at large.

After the #cphshooting the police is looking for a male, aged 25-30, 185 cm tall, athletic body type with black hair and arabic appearance.

Danish PM is at the scene of #cphshooting "I'm here to say that this is NOT how Denmark is supposed to be" pic.twitter.com/tqidwvWt0F

Danish police are now stating that they're not looking for two suspects after the #cphshooting but only one.