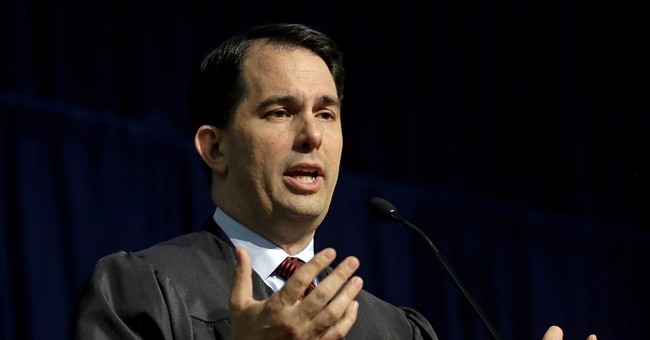 Yes, I’m sure a lot of you are waiting–or hoping–for Gov. Walker to announce his 2016 candidacy. His answer will probably come around the summer, but he’s scheduled to be a keynote speaker in New Hampshire on March 14 at an in-state Republican Party event (via RCP):

As he continues to gear up for a likely Republican presidential bid, Wisconsin Gov. Scott Walker is planning his first trip to New Hampshire of the 2016 campaign season.

On March 14, Walker will be the keynote speaker at an event that is being hosted by the New Hampshire Republican Party in the first-in-the-nation primary state.

"We have enacted bold, successful reforms in Wisconsin and we have a great story to tell," Walker said in a statement announcing his visit. "I look forward to sharing our common sense conservative message with grassroots activists, and I thank the New Hampshire GOP for this exciting opportunity."

According to multiple Republican sources, Walker’s tightknit political team has been conducting interviews recently for high-level positions in what is likely to become an official campaign organization in the coming months.

Polyansky’s history in Iowa goes back to Mike Huckabee’s 2008 campaign: He helped orchestrate the former Arkansas governor’s surprise victory in the Iowa caucuses that year, and in then in 2012, while working for former congresswoman Michele Bachmann, he helped her win the state’s straw poll.

Walker is in Iowa this weekend for the Iowa Freedom Summit cosponsored by congressman Steve King and Citizens United. The news was first reported by the Des Moines Register.

Within political circles, Walker seems to be a candidate that could clear the 2016 field, despite Marco Rubio’s “concrete steps” towards a 2016 bid of his own. He has a fundraising network that could be one of the largest in the GOP, executive experience in a purplish state, pushing through an agenda, and will already be warmed up for the campaign season, since his entire first term was pretty much one long election (2010, 2012 recall, 2014 re-election). He’s a solid, pro-life conservative as well. Yet, as John Fund wrote in National Review, right-to-work and gambling could steer the Walker ship towards rocky shoals.

In Madison, both chambers of the state legislature are Republican–and they want a more aggressive right-to-work law that prohibits private sector employees from paying dues to unions. There’s also a $800 million dollar gambling project that awaits his approval or disapproval:

A total of 24 states — including Iowa — are right-to-work. The latest additions to the list were heavily unionized Michigan and Indiana.

Yet Governor Walker has made it clear that he views the push for right-to-work as a distraction from his buttoned-down agenda of business, tax, and education reforms. Wisconsin state-senate majority leader Scott Fitzgerald told WISN-TV last Sunday that “not much will happen” on the issue in the next few months. Fitzgerald said he understood Walker’s desire to avoid large protests like those seen in 2011, when Act 10, a law restricting public-sector unions, passed.

Still, he has also warned Walker that “we can’t tiptoe through this session without addressing this.”

Another issue where Governor Walker will have to tread carefully in Iowa is the expansion of state-approved gambling. Walker will have to decide by February 19 whether to approve a proposed $800 million Menominee Indian tribal casino in Kenosha. “Influential social conservatives in Iowa are warning Wisconsin Gov. Scott Walker that approving a proposed Kenosha casino next month could hurt his presidential bid” was the lead paragraph of a Milwaukee Journal Sentinel article this month. Newly elected Iowa U.S. senator Joni Ernst joined 600 other Republicans in sending Walker a petition urging him adopt a “No Expanding Gaming” policy. Bob Vander Plaats, a prominent social conservative in Iowa who led the successful defeat in 2010 of three Supreme Court justices who had approved same-sex marriage, has also written a letter to Walker highlighting the “increased societal problems of divorce, bankruptcy, debt, depression, and suicide” that gambling can produce. In 2012, Vander Plaats’s last-minute endorsement of Rick Santorum helped propel the former Pennsylvania senator to a photo-finish victory over Mitt Romney in Iowa.

Iowa political activists tell me that Walker is taking real risks of leaks in his Iowa coalition if he either approves expanded gambling or chokes on approving right-to-work — especially in a state such as Iowa that has had such a law on its books for more than 60 years.

Hey, there are risks with any national campaign. We’ll just have to see how this plays out. It still doesn’t diminish the fact that Republicans have a conservative governor from a purple state that can make a conservative agenda law, raise money, and appeals to both wings of the GOP. He has a political network ready–all we have to do is wait for Walker.