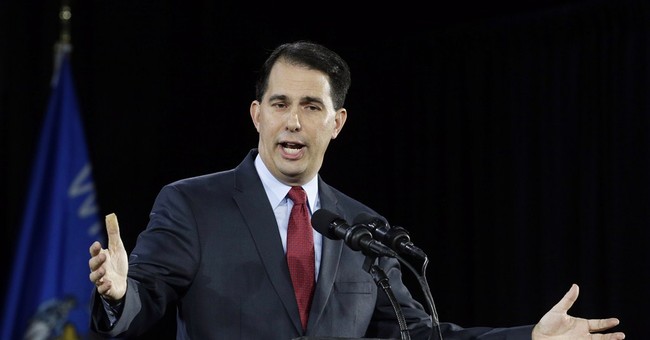 Scott Walker appears to be unbeatable. He’s won in a purplish state three times (2010, 2012, and 2014), humiliating labor unions, accruing the support of conservatives, and increasing the odds of a presidential run in 2016.

Also, as Republican political consultant Mike Murphy once said, if you’re going to run for president, make sure your wife is going to vote for you; Walker has seemingly clinched that constituency, along with the rest of his family.

According to Politico, an announcement will be made sometime in the summer of 2015. Walker needs to expand his campaign staff beyond his usual crew of loyalists and everyone knows that, which is why his office is being flooded with consultant resumes. His team is also trying to avoid mistakes from past 2012 candidacies; Perry got in too late and Pawlenty tossed his hat into the ring too early.

Right now, he’s working on pushing through his legislative agenda to strengthen his conservative bona fides:

Wisconsin Gov. Scott Walker, pivoting from his bigger-than-expected reelection win this month, is taking active steps toward a presidential campaign that would launch next summer and contrast his record of conservative achievements in a swing state with paralysis in Washington.

In interviews this week, Walker and his top political advisers provided the fullest account yet of his plans for the likely rollout of a national campaign. The 47-year-old Republican intends to use an upcoming legislative session in Wisconsin to push an ambitious agenda that could, in combination with his triumphs over Big Labor, bolster his standing with Republican primary voters: repealing unpopular Common Core standards, requiring drug tests for welfare beneficiaries and cutting property taxes.

Walker cut income and property taxes in the first term, but he wants to go further, pushing a flatter income tax system. On education, he’s planning to push an expansion of school choice and to replace the Common Core program with state standards.

His plan to require welfare beneficiaries to undergo drug testing, he said, is about showing employers that people on public assistance are capable of holding jobs.

“We want to help able-bodied adults transition from government dependence into the workplace,” Walker said, whose efforts will be aided by a state Legislature controlled by Republicans.

For the next few months, political travel will be relatively limited, aides say, as Walker focuses on his legislative agenda. He appears eager to paint a contrast with not only a gridlocked Washington but also New Jersey Gov. Chris Christie, who faces a hostile Democratic Legislature and has fewer legislative accomplishments to point to.

But Walker lacks the charisma that other likely candidates, such as Christie or Sen. Ted Cruz (R-Texas), possess on the stump. He did not graduate from college, though some blue-collar voters might see this as a positive, and lacks foreign policy experience.

While there’s enough time for Walker to formulate his vision of American foreign policy, the humble, blue-collar appeal will be a stark contrast to that of Romney.

Romney won the over $50k demographic 53/45 over Obama, but when you expand the category to anyone making less than $100k; Obama easily trounced Romney 54/44. This is mostly likely due to Obama winning the vast share of the working class vote in and around urban areas where in some states, like Pennsylvania, that’s where elections are decided–and the majority of people live.

As I’ve mentioned in a previous post, working class whites will be key to Democrats remaining competitive in elections–and they’re breaking for Republicans.

So, will the “rise of the rust belt Republican” help the GOP’s prospects in 2016? For Walker, he thinks so, but the Midwest road to the White House he speaks of isn’t an easy one–and he knows it:

“You look at the Electoral College map and what’s required to win. A good chunk of that runs through the Midwest,” Walker said. “There’s Florida, Virginia, out West — Colorado, Nevada – maybe New Hampshire depending on the year – but really most of the rest of the map is Pennsylvania, Ohio, Michigan, Wisconsin, Iowa. It’s all kind of right there. At least in recent political history, that’s kind of where it happens.”

Since 1988, Michigan and Pennsylvania haven’t gone Republican in presidential contests; Iowa has flipped only once (2004); Nevada only twice in 1992 and 1996; and Virginia, Ohio, Colorado, and Florida are solid swing states.

It seems any GOP candidate has some work to do in states that will likely decide who will succeed Obama.