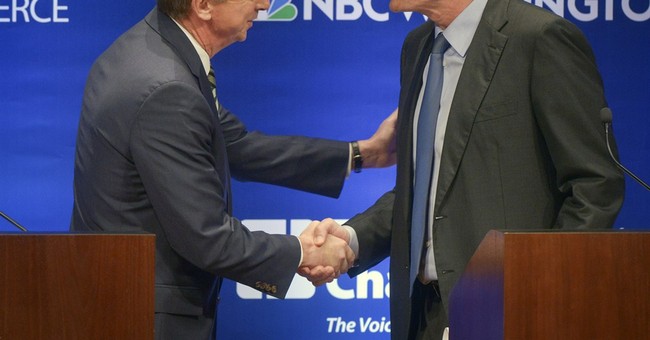 Last Tuesday, I voted for Ed Gillespie. Admittedly, when I placed my ballot to be scanned at my voting location, I felt I was dropping it into a furnace. Then, the results came in; was the Virginia race really that close?

Yes, it was; Gillespie was unable to unseat Democratic incumbent Sen. Mark Warner, who survived by a razor-thin 0.4 percent, or less than 17,000 votes. This race was supposed to be abject slaughter, but Gillespie won Loudon County in Northern Virginia; it broke for Obama in 2008 and 2012. Also, the coal counties in the southwestern part of the state, which went to Warner in 2008, went to Gillespie.

Nevertheless, it’s quite a turnaround for Warner given his small margin of victory when he garnered 65 percent of the vote in 2008. Regardless, the silver lining in this election is that Ed Gillespie isn’t going away–and he’s in really good shape to replace Gov. Terry McAuliffe in 2017.

After all, he’s proven to be a great campaigner and political strategists (via Politico):

Gillespie, painfully aware that he was regarded with suspicion by the state and national Tea Party leadership, went out of his way to neutralize conservative opposition that could have scuttled his candidacy at the GOP state convention in May. He did so with charm, wile and a recognition that the conservatives—long ridiculed by the party’s DC-based consulting class—deserved to be given the respect afforded by their electoral power within the party. It worked; the convention picked him as the party nominee. “A lot of that friction, which was always overstated, is getting smoothed away,” he told me.

He made no concrete policy commitments beyond his own already-conservative platform, but he cast himself as proto-tea partier who worked with one of the movement’s godfathers, former Texas Congressman Dick Armey, in the 1990s. “I don’t have reservations about the Tea Party,” he told reporters last spring. “I know I’m perceived as an establishment Republican… [but] I’m glad they’re energizing the political process… I think they are going to inject some steel into some spines in Washington, D.C., and that’s a good thing.”

Gillespie didn’t adopt policies that were especially friendly to core Democratic constituencies (He’s anti-abortion, opposes federal minimum wage increases in favor of state-controlled wage policy control and wants to scrap Obama-era environmental regulations) but he took great pains to change the tone, conducting listening sessions in black, Hispanics and Asian neighborhoods—and couching his opposition to immigration amnesty in technocratic, non-confrontational language. He took pains, especially in Northern Virginia, to project a modern multicultural image. “My web site was translated into seven languages—seven!” he crowed to me. Only three percent of the state’s population is Asian but Gillespie’s material was available in Korean, Vietnamese and Tagalog, spoken by about 50,000 Filipinos in Virginia.

Gillespie was hardly alone in his outreach. Nationally, such moves helped the GOP fight the Democrats effectively to a draw on the Asian vote in the congressional midterms—just two years after 2012 exit polls showed Republicans lost Asians 73 percent to 26 percent.

Yes, Politico has a slant, but it doesn’t take away the fact that Gillespie united the tea party, or at least convinced them to get behind him, reached out to traditionally Democratic voters, and carried a positive tone throughout his campaign. It paid off some serious dividends.

But the piece also noted how polling, which consistently showed Warner with a significant lead, might have spooked donors away from investing in the race, especially in the very expensive Northern Virginia media market; an area where Ken Cuccinelli had to pull out entirely before Election Day last year.

A little more money and maybe there could have been a different result. Then again, there’s the Sarvis factor. The Libertarian candidate, who ran in the 2013 gubernatorial election, tossed his hat in the ring to become Virginia’s next U.S. Senator.

Yet, as National Review’s Charles Cooke wrote last year, Sarvis was always the other liberal in both of these races. As a “libertarian,” he isn’t all that into the Austrian school of economics, was hesitant to cut taxes, and liked the idea of raising them on fuel costs. The worst offense: he allegedly was enthused by a “vehicle-miles-driven tax,” which in Virginia would require drivers to have a GPS device attached to their car.

Yet, unlike 2013 when Sarvis actually took more votes away from McAuliffe, the same cannot be said for this contest; it seems he provided Warner with a “life preserver” (via WaPo):

The Libertarian’s 53,000 voters mostly came from younger voters, particularly white males, unhappy with President Obama’s leadership. They generally leaned independent. Very few (almost none, in fact) were Democrats. But a good chunk did label themselves Republicans.

Exit polls on fringe candidates are to be read with abundant caution. Yet it is clear the Sarvis Republican voter wanted to protest President Obama’s leadership. If Gillespie had been the only option, they most likely would have backed the GOP nominee. But Sarvis gave them a second option.

The result? Instead of drowning in anti-Obama tidal wave running from the wind turbines off the Virginia coast all the way to the Alaskan oil fields, Mark Warner found a life-preserver in the Libertarian candidate.

Matt Vespa @townhallcom the latest GOP mouthpiece to parrot GOP smears about me (debunked over a year ago) http://t.co/mJRM40rheW

.@townhallcom @instapundit @mVespa1 Also wrong about my effect on the race both this year and last. Leahy WaPo piece just plain wrong.

@townhallcom @mVespa1 And GOP has had numerous opps to support instant runoff voting, but it hasn't. Bluff called. Blame yourselves.

You heard my opinion about the race; I've provided Mr. Sarvis' position. Debate amongst yourselves, folks. UPDATE II: Sean Davis who said Sarvis was no spoiler in 2013, reiterates that he wasn't this year either.

No, Sarvis did not steal the election from Gillespie. He's a liberal who took liberal votes. pic.twitter.com/hUyiVOkKnB